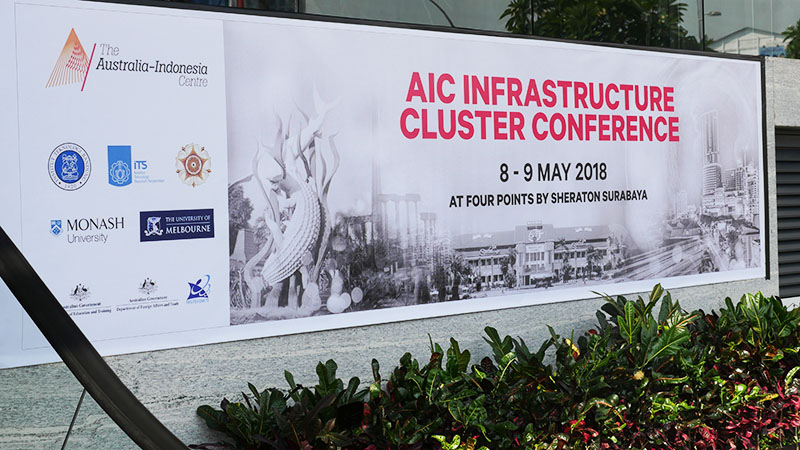 The AIC Infrastructure conference has concluded in Surabaya. The two-day event on 8 and 9 May was a great success, bringing our research teams face to face with government and industry representatives to discuss applications and future opportunities for their many collaborative projects.

Representatives of all five university partners of The Australia-Indonesia Centre Infrastructure Cluster were in attendance and presenting, with a particularly strong delegation of students in the audience from the partner just down the road, Institut Teknologi Sepuluh Nopember (ITS), Surabaya.

The AIC was also honoured to have Australia’s first consul general to Surabaya Mr Chris Barnes as a guest at the conference.

After welcomes from AIC chief operating officer Helen Fletcher-Kennedy, Ms Bridie Rushton from Australia’s Department of Foreign Affairs and Trade, and Professor Adi Soeprijanto, head of Research and Community Service from ITS, researchers took centre stage to share their findings and insights on the built, political, social and natural environments of Indonesia’s ports.

Leith Doody from Australia International Business who had chaired the welcome session in the morning returned after researchers’ presentations to moderate a panel discussion on ‘Building sustainable and resilient port cities: perspectives from government, academia and industry’.

A speech from Professor Wihana Kiana Jaya, senior advisor at the Ministry of Transportation, set the scene for the panel discussion.

On the panel were three of the Infrastructure Cluster’s lead researchers: Dr Ibu Hera Widyastuti from ITS, Professor Colin Duffield from The University of Melbourne and Professor Wing Kong Chui from Monash University.

Day one concluded with a barbeque where all panellists, speakers, organisers and guests had time to distil and discuss the day’s action.

The second and final day was focused more broadly on solutions to infrastructure challenges. The presenting researchers gave short presentations that highlighted the practical applications of their work, and showed lovely engaging videos that attracted later discussions with stakeholders during a networking session.

There was a “buzz in the room” commented Leith Doody, reflecting on the success of the demonstrations and the networking between researchers and guests stopping by their stations.

Viewable on our website, with subtitles in English and Indonesian, are conference explanatory videos on ports connectivity, fibre optic infrastructure monitoring and non-destructive testing of concrete infrastructure.

The closing address was delivered by Australia’s consul general Mr Chris Barnes, who had attended the demonstration sessions earlier. In his address he reiterated the importance of the AIC’s collaborative research approach, spanning countries, sectors and research fields.

Infrastructure Cluster researchers are now finalising project reports and working to spread their insights far and wide in the interest of improving Indonesia’s port cities, and optimising infrastructure planning in various areas in both Indonesia and Australia.