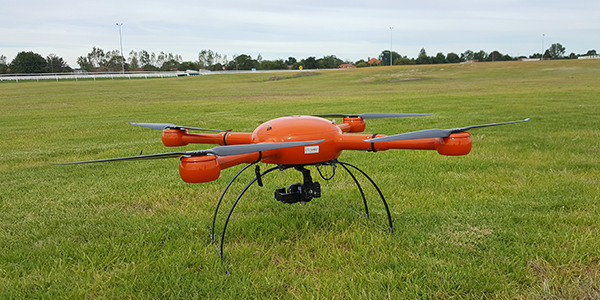 Assessing ageing bridges just got safer and easier, thanks to a high-tech radar device that fits inside a suitcase.

Developed by Dr Lihai Zhang of The University of Melbourne as part of a collaborative research project supported by The Australia-Indonesia Centre, the IBIS-S radar technology can scan a bridge in 15 minutes from a kilometre away with an accuracy of 0.01mm, quickly assessing its condition and stability.

“When we estimate the lifespan of bridges, we always believe the bridge is brand new but actually that is not the truth. Just like humans, bridges fatigue and deteriorate and need to be looked after,” Lihai says.

“Using radar-in-a-suitcase, we can better predict when bridges need maintenance and repairs so workers will be safer and budgets will be more effectively spent.”

Australia and Indonesia have tens of thousands of bridges between them—the Australian state of Victoria has more than 3,000 road bridges alone. Many were built before 1990 and would now be considered ‘mid-life,’ meaning corrosion, cracking and other damage could affect how many trains, cars and trucks the bridge can safely support.

“When these bridges were built 50 years ago, they were not designed to withstand the heavy rail, truck and car traffic that now travels across them each day,” Lihai says.

“Natural disasters such as floods and earthquakes, as well as traffic accidents also affect the bridge’s carrying capacity. The expansion of ports in Australia and Indonesia means we rely more on roads and bridges to transport cargo, so it’s important that we give policymakers accurate information about the changing carrying capacity of bridges as they age.”

Inspecting bridges can be a dangerous and costly affair. Roads must be closed for several hours while inspectors check the bridge for cracks, sometimes suspended hundreds of meters in the air.

Using structural drawings provided by VicRoads and the radar-in-a-suitcase measurements, Lihai and his team have built 3D computer models that can simulate bridge movement and predict how the bridge, in its current condition, would respond to damage such as a boat crashing into a pylon.

In the coming months, Lihai will be testing a drone that can ‘see’ cracks in bridges using image recognition technology.

He’ll then be taking his suitcase full of equipment to Surabaya in Indonesia to work with Professor Iswandi Imran from Institut Teknologi Bandung, and Professor Benjamin Lumantarna of Petra Christian University, to assess the health of Indonesia’s bridges.