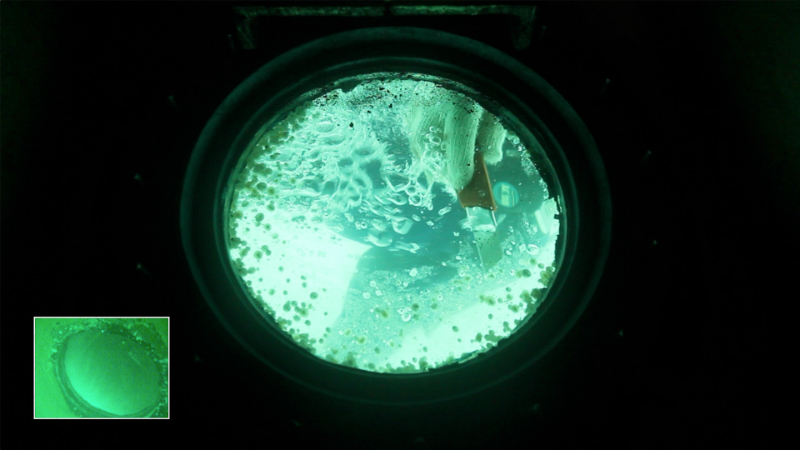 Every shipping manager wages an endless battle against fouling – the bacteria, seaweed, barnacles and other marine life that take residence on the hull of ships. This biofouling is thought to add more than 20 per cent to the fuel costs of commercial shipping. That’s a big cost for the maritime trading nations of Australia and Indonesia. Using lasers and a window in a ship’s hull, researchers will assess how quickly the efficiency of the ship declines, and then how to balance fuel efficiency and the cost of putting a ship in dry dock to clean it.

“Essentially we’ve built a laboratory worth thousands of dollars inside the hull of the ship. Once we clearly know how things are growing on the bottom, and the effect this has on fuel efficiency, we can suggest more informed anti-fouling strategies, saving time and money for boat operators and passengers,” says Professor I Ketut Aria Pria Utama from Institut Teknologi Sepuluh Nopember (ITS).

The team combines the maritime experience of engineers from Institut Teknologi Sepuluh Nopember with fluid mechanics expertise at the University of Melbourne and the University of Southampton, along with protective coating group Hempel.

As soon as a new ship enters the ocean it starts to accumulate fouling – bacteria settle within days, followed within weeks by plants and animals. It’s a particular problem in the tropical waters of Indonesia and northern Australia.

“The real costs for shipping operators are hard to determine,” says Associate Professor Nicholas Hutchins of the University of Melbourne.

“Research discussions with ship operators all go well until we say ‘and now we just need to put a small hole in the side of your ship’. But our Indonesian collaborators persuaded the PT Dharma Lautan Utama line to allow us to install a 30cm window in the hull of one of their inter-island ferries, the 71 metre Dharma Kencana IX, which transports people between Java and South Sumatra.”

Normally a boat can do this route in two hours, but with a high amount of marine growth on the boat, the journey can easily take double the time.

The US Navy estimated that for its Arleigh Burke-class destroyer, resistance due to fouling costs about $2.3 million per ship per year in extra fuel consumption. Modern container ships are 10 to 15 times heavier. So the waste of fuel could be much higher.

For the fleet of ships operating in Australian and Indonesian waters the costs could be billions of dollars per annum. And there’s a significant carbon footprint as well: a substantial proportion of the fuel burnt by a large ship is used to overcome drag, and even a moderate amount of biofouling adds substantially to this.

“Fifteen thousand dollars of seed funding from the Australia Indonesia Centre has enabled us to reach out to industry and other collaborators to build this into a much bigger, $200,000 dollar project, including securing a collaborative grant with the University of Southampton in the UK,” Nicholas says.