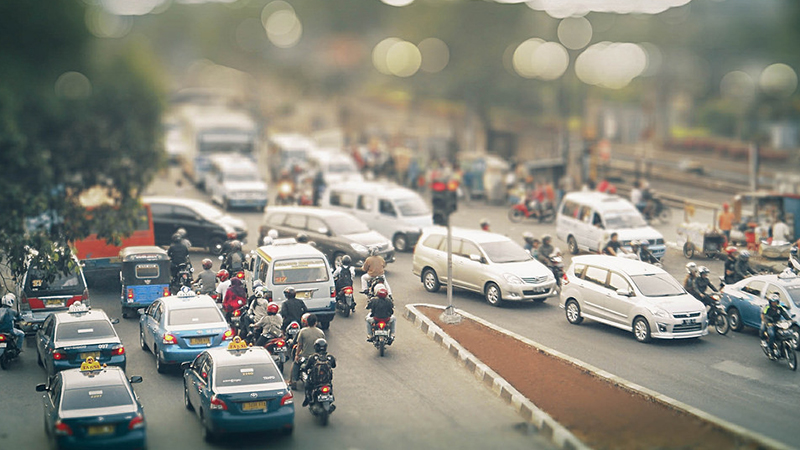 Posted on 18 December 2017 |
There are several words and phrases a visitor to Indonesia should learn. These include – Apa kabar? How are you? and Terima kasih Thank you. In Jakarta, the visitor will also quickly learn the word macet – traffic jam.

I have yet to find a clear calculation of the cost of macet to the economy of Jakarta but it is clearly in the billions of dollars per year. Think about all the fuel wasted by cars, trucks, buses and motorcycles sitting on roads going nowhere. In addition, there are the untold billions of hours per year in which people are stuck in excessive traffic congestion, plus the health costs from the stress and other illnesses associated with such living conditions. Then there are the opportunity costs of this macet. For example, how many times does the average Jakartan wish to go out to meet friends, go to an event or a meal or a show but then thinks of the traffic and decides “I think I’ll stay here”? How many lost business opportunities does that add up to? How many lost opportunities for creative get-togethers?

For others, of course, a problem can be an opportunity. Over 20 years ago, I gave up on using cars in Jakarta and started to use ojek (motorcycle taxis). Rainy season aside, it is the only way to have any predictable control over your time. Indeed, one of Indonesia’s first unicorns – Go-Jek – was born of the frustrations of trying to inch through Jakarta macet. The founder, stuck in traffic, thought of organising hundreds of thousands of ojek through an online system.

Over the 27 years since I put down anchor in Jakarta I have seen the macet situation steadily deteriorate but then improve after some small breakthroughs – a couple of new feeder roads, or  widening roads by further squeezing pedestrian access, or attempts at controlling car numbers on main roads (such as the 3-in-1 system), or more recently the odds-and-evens system for cars.

Additionally, the provincial authorities created a Busway system (converting lanes to bus-only) as an attempt to boost the use of public transport. As each of these initiatives were rolled out, there were often slight improvements, but within a couple of years the macet would again get worse. The limitation of each of these approaches was that they essentially tried to squeeze more transport movement productivity out of the same roads – always in the face of ever-growing numbers of vehicles on these same roads.

The only feasible answer, other than flying cars, is to create new travel corridors that do not merely add more pressure on the existing roads. Perhaps the most common answer in huge cities is to create mass rapid transit (MRT) systems. As elsewhere, obvious answers do not always become answers applied quickly. The struggle for a Jakarta MRT began at least a quarter of a century ago. Even attempts to create such an MRT by then-strongman President Soeharto failed, as competing groups managed to scuttle these efforts. Several subsequent governors of Jakarta also attempted and failed to make headway despite the steadily deteriorating traffic situation.

Many consider haughtily that systems of democratic governance are incompatible with ‘getting things done’. The development of the Jakarta’s MRT, following the election of then-Governor Joko Widodo, would appear to show a different experience. While initially unenthusiastic about the MRT approach, he quickly came around to its benefits. He then set about laying the appropriate regulatory and bureaucratic conditions to enable such a development, as well as mobilising wider political support from the public before launching the relevant tenders. With public support and acceptable processes in place, potential spoilers were unable to subvert decisions this time.

The results have been impressive. The final connecting block between the north and south end of the first MRT line was closed off in late November 2017. Relevant land procurement has been completed and the train stations are now being built. The special purpose corporate vehicle, PT MRT, is not only working on procuring the relevant rolling stock but is also engaged actively in staff recruitment and in developing training capacity. The company is also developing capacity to manage non-transport-fee income streams by making use of the station property for rental and later for wider use of nearby property management.

The Australia-Indonesia Centre, especially through its infrastructure and engagement work, has been building a partnership with PT MRT in a range of areas, such as a capacity to check the health of the rail lines by being able to identify quickly and cheaply any stress fractures before they become dangerous, as well as on aspects of education and training for staff. Australia has for decades been a prime partner with Indonesia on vocational education and training. These experiences need to be brought forward into this area. Given that President Joko Widodo has begun to prioritise the need for vocational education and training as a core national need, the early focus of PT MRT on skills development is both timely and very well aligned.

A couple of years ago, I moved to live very close to the new MRT line, and close to one of the proposed stations. I have been told that I will be able to travel from new home in the far-south to the centre of Jakarta in less time that I used to take to travel from my old inner-south home to the centre. The economic geography of a city changes quite quickly when a city embraces an MRT system. The notion of the ‘centre of the city’ becomes more complex, even in an already fragmented city like Jakarta. In many ways, the centre of the city becomes anywhere that is close to a main MRT line.

With this south-north MRT corridor expected to come into operation in the first quarter of 2019, it is hoped that Jakartans will embrace this new way to move about their city. On this, I am confident. When the Busway system was established a decade ago, there was initially some resistance but people soon came to adjust and the Busway buses are now as crammed with commuters as regular buses.

The next big step will be to better integrate the various modes of transport in terms of scheduling, load sharing and payment systems. The issue of cross-sectoral and cross-agency coordination are never easy to address. In addition to the MRT, Jakarta will soon have an operational light rail transit system connecting Jakarta with the nearby city of Bogor, as well as the airport train connecting Jakarta’s key airport – located in the neighbouring region of Tangerang – with Central Jakarta.

All these investments represent big and important changes. If successful, visitors to Jakarta may no longer have to become familiar with the word macet. After all there are so many more useful words and terms to know.