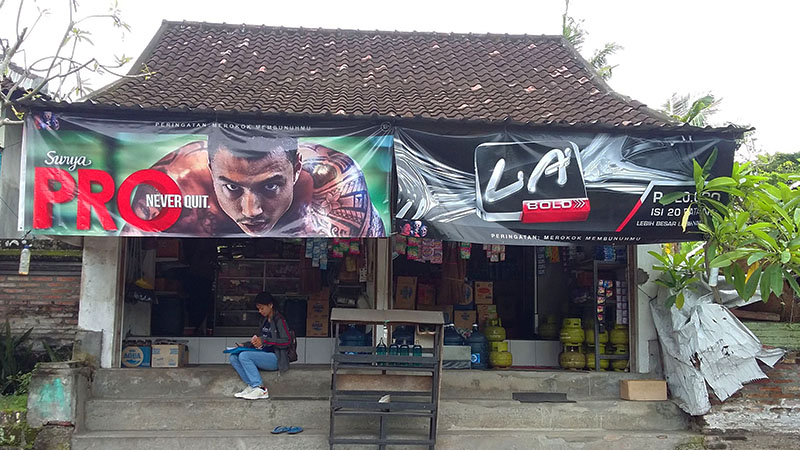 A collaboration of researchers from The University of Sydney, Universitas Udayana in Bali and Universitas Airlangga in Banyuwangi, funded by The Australia-Indonesia Centre Health Cluster, mapped cigarette retailers and conducted an audit of their tobacco advertising and promotion right across Denpasar, Bali, between October 2017 and March 2018.

Of those mapped, 1000 cigarette retailers were also audited:

The omnipresence and high density of cigarette retailers makes cigarettes easily accessible and shows that they are socially acceptable. A key success factor in tobacco control is changing the social norms around cigarette use, and ensuring that smoking is viewed as unacceptable behaviour, especially among young people.

The density of cigarette retailers “makes it impossible for children to be protected from tobacco promotions” said Dr Ayu Astuti, the research team leader. “The tobacco companies state they are not targeting young children but their sales practices do not match their corporate speeches. Unless the government is willing to scale up their tobacco-control measures, including regulating where tobacco is sold and how it is promoted, the dream of an Indonesian smoke-free generation will never be realised.”

There are several policy options for regulating the density of cigarette retailers that have been adopted in other settings. These include:

Globally, Indonesia has the fourth-highest tobacco consumption, with 65.2 million adult smokers. Worryingly, there has been a significant increase in the prevalence of smoking among young children (from 9 per cent in 1995 to 17.4 per cent in 2010). This steep rise will dramatically increase future health and socioeconomic burdens.

Besides prohibiting selling cigarettes to people below 18 years old, which is not optimally implemented, there are no regulatory approaches limiting the sale of tobacco products. Possible policy approaches include limiting the distribution and density of cigarette retailers, especially in areas where young people congregate.

The research team recommends that Indonesian governments should urgently consider the adoption of a comprehensive ban on tobacco advertising and promotion, including at the point of sale, and a legislative framework for reducing the density of cigarette retailers.