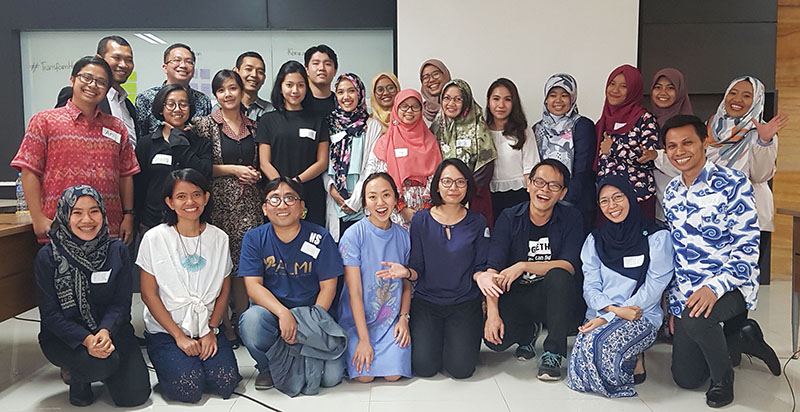 Delegates of the Australia-Indonesia Centre Transform Health Leadership Program recently delivered a workshop in Jakarta to pass on their new knowledge and ideas to twenty fellow Indonesian health professionals.

The nine Indonesian health professionals who completed the Health Cluster-led program in Melbourne in February presented a two-day workshop called ‘Indonesian Approach to Transform Adolescent Health in NCDs Prevention’ at the Indonesian Academy of Sciences in Jakarta on 14 and 15 April 2018.

The focus of both programs was the importance of adolescent health and evidence-based practice and advocacy in the fight against the onset of non-communicable diseases, together with the leadership and communications skills needed to bring all relevant groups and sectors together – particularly the need to engage and involve adolescents themselves.

AIC Health Cluster lead Professor Sawyer explained why these topics were chosen when she addressed the Jakarta program: “Forty-three per cent of Indonesia’s population is under the age of 30. While there is good knowledge of child health in Indonesia, technical expertise in adolescent health is lacking. The importance of adolescence as a critical developmental phase within the life course highlights the need for Indonesia to grow its capacity to develop policies, programs and practices to advance adolescent health.”

“We decided to make our circle bigger and stronger. We want to… share that knowledge, skill, and most importantly, our ‘adolescents’ spirit,” the group of nine outlines in their program booklet, speaking of their decision to run the follow-up program as their ‘project output’ from the Transform Health Melbourne program.

Day one focused on adolescence – an important developmental period when many NCD risk behaviours arise, such as smoking and lack of exercise, and are most easily prevented (before they become more established and difficult-to-break behaviours in adulthood).

John Prawira of Universitas Gadjah Mada and Dr Fransisca Handy Agung from Universitas Pelita Harapan highlighted that adolescents are a significant portion of Indonesia’s existing population, outlined some of the unique aspects of that group, and explained why they form a crucial target in the fight against NCDs for future development.

“Adolescents are the backbone of Indonesia’s demographic bonus that will reach its peak in 2030,” says Mr Prawira. “Cost-effective interventions have to be implemented, starting from adolescence.”

Hafizah Jusril from Universitas Indonesia discussed the rise of NCDs in Indonesia which, she explained, “have been established as a clear threat not only to human health, but also to development and economic growth”. Dr Sudirman Nasir from Universitas Hasanuddin then spoke about the rising mental health burden in Indonesia, which has to date remained neglected.

Hasna Pradityas from Smoke Free Agents shared her organisation’s creative approach to de-normalising smoking. In partnership with AIC Health Cluster, Smoke Free Agents educates high school students around health risks and tobacco-control advocacy. Some of their students have gone on to lobby local governments around advertising and law enforcement.

Day two covered the knowledge and skills needed for working and influencing within and across different sectors – as supporting improved health for Indonesia’s adolescents requires co-operation from policy makers, educators, health professionals and more.

Dr Cut Novianti Rachmi from the University of Sydney and Deviana Wijaya Dewi from the Australian Embassy in Jakarta focused on writing policy briefs that make an effective, evidence-based case for a particular course of policy action, and generally communicating research findings to government, the media and the public. “I [saw in Melbourne] how research has a strong role in Australian society,” Deviana said. “[Indonesia likewise] needs to mainstream evidence-based practice and policies.”

Dr Bernie Medise from Universitas Indonesia who also chairs the Adolescent Task Force of the Indonesia Pediatric Society spoke on capacity building in adolescent health services, and allowing all stakeholders to contribute to and benefit from the sector’s progress. “When we talk about NCDs,” she explained, “we don’t talk only about diseases or patients, but also about lifestyle, facilities, and policy”.

The importance of young people as stakeholders and taking ownership was highlighted. “We have to invite the adolescents to get involved and create some programs for themselves,” commented Hasirun from the South Butan Department of Health.

The workshop in Jakarta advances an aim of AIC Health Cluster researchers – to expand the capacity and network of health professionals aware of the importance of adolescent health towards reducing Indonesia’s future burden of non-communicable diseases.

“One of our biggest challenges is to collaborate with all of those interested in adolescent health across Indonesia,” says Dr Cut Novianti.

The ‘Melbourne graduates’ are also establishing the Indonesian Adolescent Health Association, or AKAR (Asosiasi Kesehatan Remaja), in which the twenty participants of the Jakarta program will join them “working hand in hand to improve the health status of our adolescents and eventually, Indonesia’s future generation.”

“It’s an incredible output by our delegates,” said Christianne O’Donnell who manages the AIC Health Cluster which supported the delivery of the Melbourne program led by Andrea Krelle and Professor Susan Sawyer from the University of Melbourne and Dr Bernie Medise from Universitas Indonesia. “We are feeling very proud.”

AKAR has been involved in several projects focusing on adolescent health around Indonesia:

In March 2019, AKAR also completed a project for the WHO Adolescent Health program in Indonesia. An official WHO report on this work is due out in 2020.