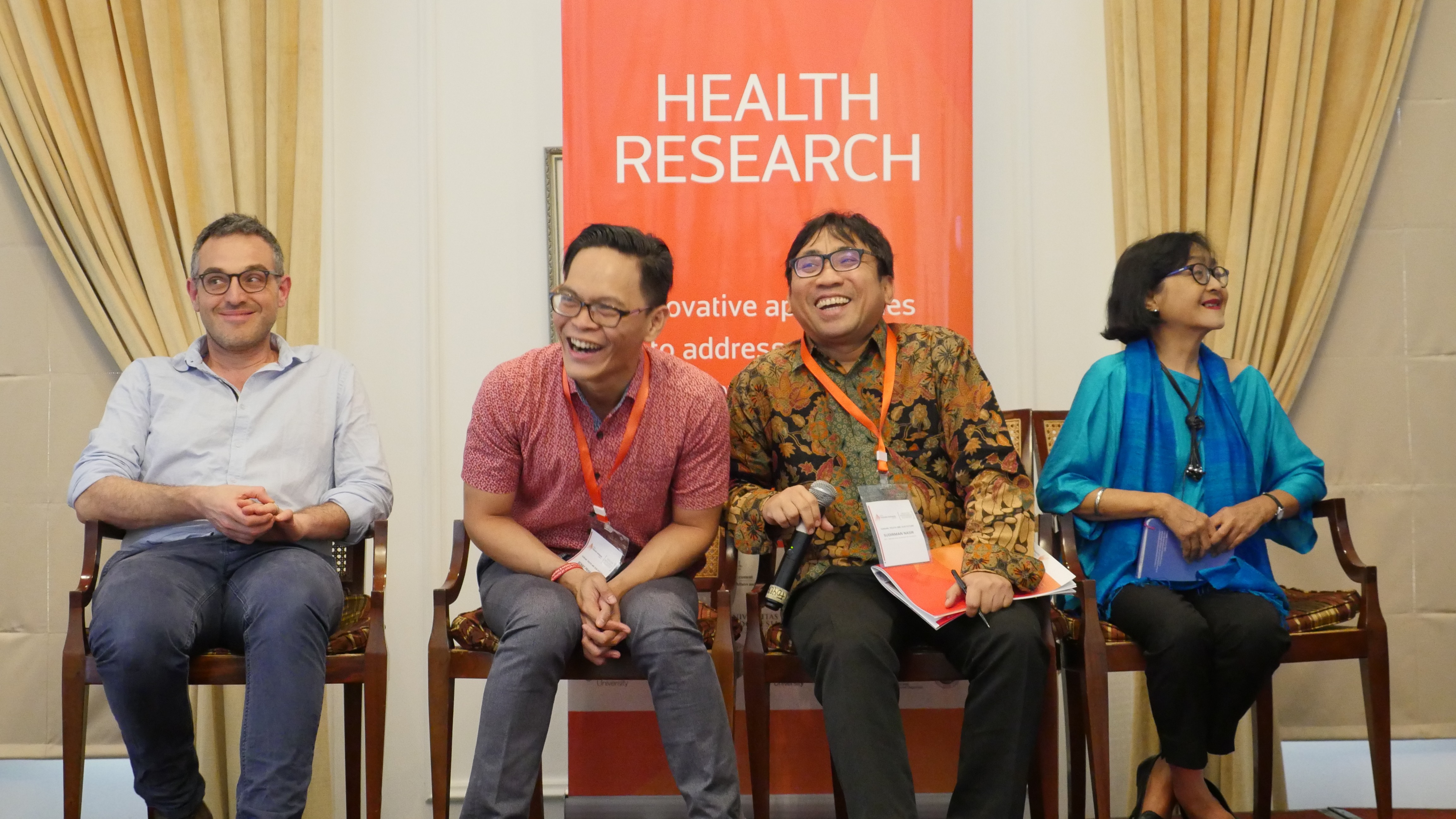 The ‘Youth are our Future’ forum in Jakarta yielded new and strengthened links between researchers and NGOs and government agencies, particularly across health and education, whose partnership is vital for translating research into policy.

This diverse group shared their commitments and vision for reducing the current and future burden from non-communicable diseases (NCDs). A key focus was on considering evidence-based policies and practices that support healthier behaviours during adolescence to halt a number of preventable risks for NCDs.

Around this theme, government, NGO representatives and, vitally, young people themselves, shared their work and their visions; wide-ranging research was presented and discussed; collaborative panels and small group discussions provided healthy debate and space for identifying creative solutions; policy pathways were canvassed; and the entire room grew in its conviction regarding the critical importance of early-life interventions to build the health and wealth of Indonesia’s ‘golden generation’ – and thus the nation.

“If we want a big and strong nation in the future then we must form a healthy, smart young generation today” declared Dr Cut Putri Arainie, the Ministry of Health’s director of NCD prevention and control.

She alluded particularly to “serious threats [posed by] tobacco smoking among children and young people”. Forming a perfect springboard for a day of cross-sectoral discussion, Dr Cut spoke of opportunities for an integrated response to NCDs in the context of the archipelago’s complex, decentralised health system.

Kate Smith, from the Australian Embassy, also acknowledged that “to truly achieve change, children and adolescents must be involved and have a seat at the table in any discussion”.

Also on the policy frontline and pushing for greater integration of NCD prevention work was Bapak Harifuddin Mansyur from the Ministry of Education in South Sulawesi.

Bapak Hari wants to see closer links between his office and the Ministry of Health, so that education programs are informed by the latest research. To properly address a health issue facing adolescents, such as depression, Pak Hari explained, a first step should be that all teachers are trained so that they are well prepared to support change.

Approaches to educating the next generation of health professionals were also discussed. Professor Kirsty Foster, Health Cluster co-lead from The University of Sydney, shared her research on equipping health professionals with not just knowledge but communication skills, critical thinking, and an interest in life-long learning.

Alongside research evidence, community groups and NGOs are a critical force for influencing policy decisions. Ibu Ninuk Widyantoro, co-founder of the YKP Women’s Health Foundation, addressed the forum on the importance of women’s access to education for the realisation of this generation’s potential.

While running training sessions in East Java, she found that “49 per cent of all brides were still children, whose educational opportunities are ended early by marriage and parenting”.

This reinforced the need to consider legal frameworks that maximise participation in education, such as age of marriage laws, and was a reminder of the importance of access to non-judgmental sexual and reproductive healthcare for young women.

Educational attainment is an important aspect of prevention of NCDs, both for this generation and for their children.

The importance of mental health and wellbeing was widely supported as a critical NCD during adolescence. According to Professor George Patton from the University of Melbourne, a particular challenge for Indonesia is the lack of data on risk factors for mental disorders.

Another passionate NGO delegate was Benny Prawira, co-founder of the youth suicide prevention organisation Into The Light Indonesia. Mr Prawira called for greater effort to fight the stigma that surrounds mental health problems.

He also stressed that improvements in mental healthcare and policy need to acknowledge the particular issues experienced by gender and sexually-diverse young people.

Media reporting is a powerful force driving public opinion. The Cluster was pleased to host Prodita Sabarini and Achmad Nurhasim, editors at The Conversation in Indonesia. After the forum, Mr Nurhasim committed to including more content on NCD prevention among young people.

“The impact of infant milk formula promotions in particular needs more publicity,” he noted, reflecting on one of the Cluster’s studies on the influence of advertising on breastfeeding mothers’ and health professionals’ decisions. Like media, marketing also powerfully influences NCD risk behaviours, he acknowledged.

“The power of cross-sectoral collaboration was clear today,” reflected Professor Susan Sawyer. In thanking delegates, he also stressed that the dividends of the ‘golden generation’ were not yet guaranteed: “It will take hard work and smart policy.” She particularly acknowledged the young people in attendance, and the importance that their voices be both listened to and responded to by government.

One strong young voice in the room was Nada Alichiah from the Australia-Indonesia Youth Association. Nada agreed with the need for adolescent voices in decision-making on adolescent health. “The academics and government officials have knowledge about young people, but they are not young people – so we are here to connect the dots with our practical experiences.”

On behalf of the participants and Cluster leadership, Sawyer also paid tribute to Christianne O’Donnell and Falma Kemalasari for their organisational efforts that culminated in such a successful event.

Around the room, there was wide acknowledgement that the event had contributed to generating understanding and building momentum for greater investment in evidence-based youth-focused NCD prevention policies and programs.

The Health Cluster will publish its final research reports and recommendations in the coming months.