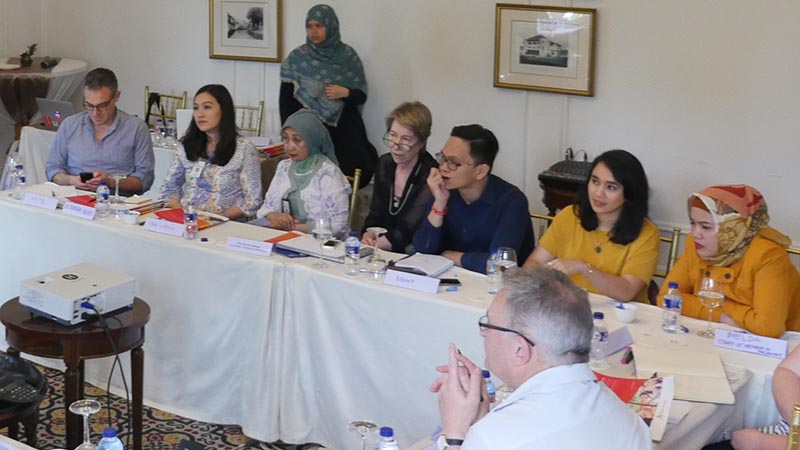 Dr Nova Riyanti Yusuf is a Member of Parliament (2009-2014, 2018-2019), a psychiatrist, and the head of the Jakarta Psychiatric Association. She recently attended AIC Health’s mental health roundtable in Jakarta, and kindly agreed to reflect on her experiences as a lawmaker and mental health advocate.

I didn’t expect to be left ‘waiting in vain’, as Bob Marley sang, but sadly it has been so for the past three years.

To explain, I have to look back to nine years ago. In 2009, as a rookie and naive member of the House of Representatives (the DPR, or Dewan Perwakilan Rakyat), I initiated the Mental Health Bill and successfully delivered it into the National Legislation Program for 2009-2014. I believed in standing up for the rights of 18,000 people with mental disorders being shackled, caged, locked up and/or physically restrained in their homes and shelters. Little did I know initiating the bill was only 5 per cent of the process. I had to maintain my energy and belief for another five years to see it passed into law.

Indonesia is the fourth-largest population in the world and faces multidimensional problems including increasing numbers of suicides and natural disasters. How can we survive as a nation without a comprehensive Mental Health Law to form the foundation of our new and reformed mental health care system?

My energy and belief was somewhat contagious. With the help of fellow legislators and expert staff, I managed to pass the bill into law on 18 July 2014. I plunged into the fountain outside the DPR afterwards. The legislation had been approved and codified in law and was being prepared for implementation.

What is contained in the Mental Health Law, or Law No.18/2014? It is an ambitious document, with 10 chapters covering everything from general provisions to community participation and criminal provisions. The early chapters define, among other things, a person with a mental health problem, a person with a mental disorder, and a mental health care system, which, it explains, should include health promotion, preventive care, treatment and rehabilitation.

One of the significant roles of the law is outlined in Article 65 (3). Here it stipulates that the Minister of Health must ensure that there is an institution to function as a centre for research, development, and promotion of the utilisation of technology in the field of mental health. The institution can be an educational institution or a mental health services or research institution that already exists, or in certain circumstances can also be a new institution. The functions required of this institution are very similar to those of the National Institute of Mental Health (NIMH) in Maryland, USA, where I took the law’s drafting committee for a visit in 2012.

Promotion of technology is an important role for the institution as technology provides new choices. To develop health care services, it is necessary to conduct research and to develop and distribute technological solutions. This is true for all stages of mental health care: prevention, detection, treatment, alleviation of suffering, and recovery. Technological solutions in mental health can perform many functions, including improving mental health medical record keeping, identifying in more detail activity in the brain with psychiatric effects, and assisting research into various psychiatric treatments.

An exciting learning opportunity came my way when Professor Byron Good, a specialist in Medical Anthropology, invited me to Harvard Medical School to be a research scholar in the Department of Global Health & Social Medicine. There we discussed the implementation of Indonesia’s Mental Health Law, including Article 65 (3). After I returned to Indonesia Professor Byron’s invaluable advice on this issue continued. He emphasized that the role of an Indonesian national institute for mental health should be to support basic research (in fields such as biology and behavioural and social sciences), translational research (to turn basic research into preventive practises and treatment methods) and research into health services including implementation of the new law.

Since finishing my first round of service in the parliament in 2014, I have discovered how difficult it is to advocate for the implementation of the Mental Health Law. It’s frustrating, yet I keep trying to instill in stakeholders a sense of urgency for implementing Article 65 (3). An old friend that I met at a television talkshow in 2007 was recently elected deputy governor of Jakarta. During his campaign I managed to brief him on the mandate to establish the Indonesian version of America’s NIMH. He was very supportive and assigned to me development of the concept, together with his staff. We had worked on it for almost six months, when suddenly he announced his candidacy for vice president of Indonesia at next year’s elections. My hopes, once again, were shattered. Without his leadership it seems this project will not go anywhere.

Soon after, I was suddenly called back to parliament. The celebrity MP who beat me by 2000 votes in 2014 suddenly resigned to move to another political party. It is only a one-year opportunity, but I believe it’s enough to get at least one big job done and that is ensuring that the Health Minister follows up on the Mental Health Law.

At my first hearing with the Health Minister I asked about progress on drafting an Executive Regulation that covers health promotion, preventive care, treatment and rehabilitation. The Minister seemed taken aback and immediately sought updates from her staff. I hope this will speed up the process. Once the regulation is authorised by the Minister, Indonesia’s very own National Institute of Mental Health will hopefully, finally be established.