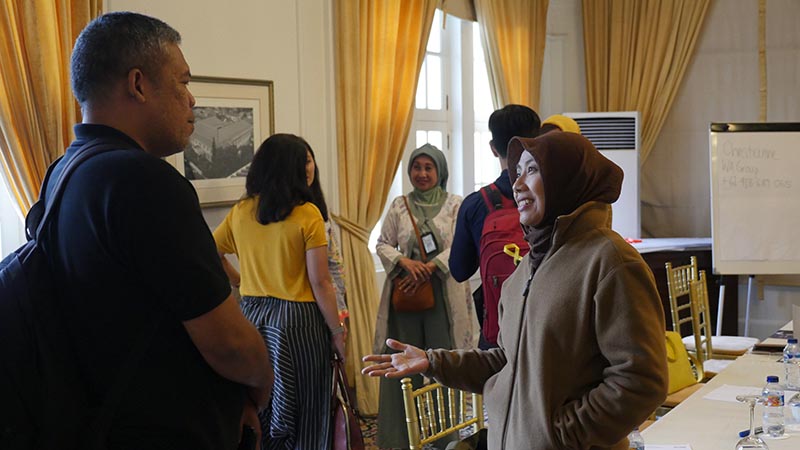 With global attention on mental health in October, a diverse group of individuals all focused on improving the mental health of Indonesia’s young people came together in Jakarta recently, and exciting opportunities for stronger advocacy emerged.

A roundtable around mental health data needs for Indonesian adolescents was hosted by the Health Cluster of the Australia-Indonesia Centre on Friday 21 September. Experts presented on currently available data, and heard from representatives of various sectors and regions about where data is missing, and what advocates hope to achieve with future data collected. Preliminary research findings from the AIC Health Cluster have shown concerning rates of depression and anxiety being experience by Indonesia’s youth, who are the future Generasi Emas, or Golden Generation.

There was also widespread support for the formation of an Indonesian mental health research institute, supported by Indonesia’s new Mental Health Law of 2014, to provide a strong, unified voice in support of the research and evidence-based policy needed to ensure best-practise mental health education and prevention at schools, universities and community health centres.

The strength of the roundtable was not only the group’s depth of experience and commitment to young people’s mental wellbeing, but its diversity – guests around the table ranged from school counsellors and university lecturers to a sitting member of parliament, Ibu Dr Nova Riyanti Yusuf Sp.KJ, who is also the president of the Perhimpunan Dokter Spesialis Kedokteran Jiwa Indonesia (Indonesian Psychiatrists Association).

“We need to familiarise ourselves with action research,” said Ibu Nova. “The PDSKJI has 150 members, but not many are interested in research, though they know some necessary steps [such as data collection] are not complicated.”

In recent years, she reported, positive progress was seen in the new Mental Health Law, then strengthened by the Ministry of Health’s movement towards a prevention and control approach to mental health, which includes training for teachers and counsellors. Other models for implementing this change, she admitted, were still not clear, though ideas under discussion include stronger promotion and resources for the school counsellor referral system and strengthening the country’s pool of mental healthcare professionals.

Sitting in parliament for just one more year, Ibu Nova expressed hope that she could guide through some important changes within that period. She is not alone, as support around the table was unanimous for more research data in the mental health space.

“We need data to support harm minimisation for drug users,” shared Subhan Panjaitan from Sulawesi, a lawyer who works with Rumah Cemara, a peer-to-peer program that improves quality of life for drug users and people living with HIV.

“Data is needed on prevention strategies, not just on numbers and risk factors,” added Indah Deviyanti from the World Health Organisation’s Indonesia mental health unit. That, along with capacity building she stated, would help regional health workers better implement new Health Ministry prevention policies rather than spend all their funding on treatments, such as medicines.

School counsellor and lecturer Ibu Susi Fitri, a member of the  Asosiasi Bimbingan Konseling Indonesia (Indonesian Guidance and Counselling Association) expressed concern that although school counsellors were the most widely available mental health resource for youth in Indonesia, they often discussed academic progress more than mental health – a fact that “could be making things worse” by adding to student anxiety according to Dr George Patton from The University of Melbourne who chaired the discussion.

Ibu Susi welcomed many of Ibu Nova’s ideas for Health Ministry improvements, noting that many mental health assessment tools were restricted for administration by psychiatrists and psychologists only. “Counsellors need more tests made available to them, and also better training around when and how to refer students to specialists” – something they currently rarely do.

When it comes to training doctors and other health professionals, Dr Fransiska Kaligis from Universitas Indonesia pointed out that Indonesian universities currently devote very little time to mental health. She agreed also that improved training was needed for local primary healthcare workers and school leaders and counsellors around testing for and responding to mental health problems.

Due to Indonesia’s geography, and inevitable shortage of psychiatry and psychology specialists, Dr Fransiska highlighted technology-assisted intervention avenues as vital. Online chat and video counselling was suggested, though suicide prevention advocate Benny Prawira reported that these services would need to be monitored for quality.

The organisation that Mr Prawira co-founded, Into the Light Indonesia, is currently in the process of reviewing and mapping online counselling services, looking particularly at staff qualification levels, and service quality and effectiveness. Another research area he would like to see funding for relates to help-seeking behaviours of young people – be it via friends, school counsellors, internet, or other channels. This he says could better inform preventative outreach strategies.

In closing the roundtable, AIC Health Cluster lead Dr Susan Sawyer from The University of Melbourne expressed deep satisfaction at the exchange of knowledge and ideas: “An event like this helps you realise how much change is truly possible for improving the wellbeing of young people.”

Dr Sawyer also reiterated the exciting opportunity that a national institute for mental health would be, for not just putting research out there but linking it to policy.

Discussion on mental health opportunities ran on well beyond the close of the meeting, partly due to the relative simplicity of many of the opportunities discussed, and many of them being quite attainable in the short to medium term.