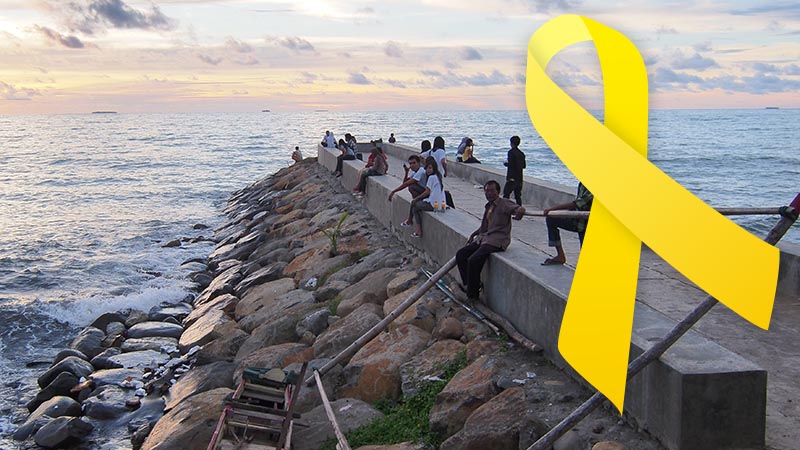 Based on reported cases, as listed in World Health Organisation mental health data, Indonesia has a lower number of deaths by suicide per capita than other Southeast Asian or Asian countries. However, suicide is still a threat for Indonesia and it is well recognised that social taboos often lead to under-reporting of suicide deaths, suicidal ideation and self-harming. The reality of someone dying by suicide is heartbreaking for all of us, felt even more deeply by those who lose someone close to them. The fact that suicide often affects young people of reproductive age means not only the sad loss of young souls but the slowing of the growth of Indonesia. The future of Indonesia depends on young people – their contribution to society, both social and economic. A high prevalence of suicidal behaviours means that, taboo or not, there is an urgent need for action to support Indonesian young people.

Losing someone to suicide is made even more emotional because, looking back, it can often seem preventable. However, it is commonplace for those living with suicidal ideation or behaviours to struggle to seek help due to the stigma surrounding mental health problems and suicide. The shame and fear of negative judgment that results from this stigma contributes to preventing people from seeking the help they need.

We can help to shift perceptions and lift the stigma associated with suicidal behavior by openly acknowledging the distress and emotional agony that people living with suicidal ideation and behaviours experience. Globally, one person is lost to suicide every 40 seconds; we need to act now.

Fortunately, in recent years, many communities have been working together to improve mental health and wellbeing in Indonesia. Some work by increasing health literacy and understanding around mental wellbeing and disorders, including suicidal behaviour. Two such organisations are Into The Light and Save Yourselves, which focus their efforts on preventing death by suicide. In their experience, improving society’s fundamental understanding of mental health problems leads to greater compassion for people struggling with mental health issues, which in turn supports their recovery.

So where can we start? Compassion starts with increasing our awareness of the distress and suffering experienced by a person living with suicidal ideation or behaviours. People who struggle with suicidal behaviour often feel an intense inner agony which they intend to stop by ending their lives. By being aware of and sensitive to this suffering, we can support them with empathy, understanding and a motivation to help them seek professional support. At the same time, this empathy challenges existing judgements and the stigma experienced by people living with suicidal behaviour.

Our sensitivity and empathy for people struggling with suicidal behaviour can help them. Often, when people with intense distress or depression talk about their suicidal thoughts to compassionate others, they can feel relieved and evidence suggests that their risk of suicide decreases[2]. Certainly, it is vital to support individuals to seek professional help as part of treatment and recovery. As we commemorate World Suicide Prevention Day, we are invited to together increase awareness around suicide deaths and suicidal behaviour among us. Greater awareness, understanding and compassion are vital for preventing suicides. The challenge for each of us is to open our hearts with compassion and reduce the stigma around suicidal thoughts and behaviours and encourage help-seeking behaviour.

Anyone struggling with suicidal thoughts or behaviours can reach out to: