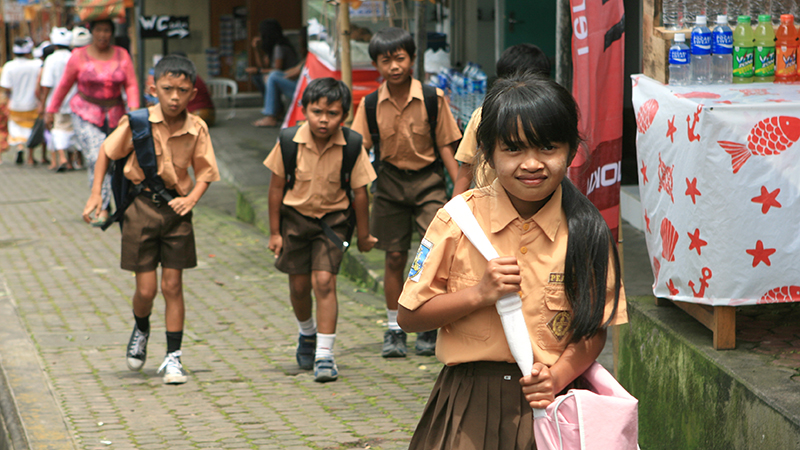 School-aged children are surrounded by messages about food and nutrition, from shop signs to brand advertising. Linguists from Indonesia and Australia have developed a new way of studying how this affects them, using smartphones and clever analysis.

In a project financed by the Australia-Indonesia Centre, the researchers used their phones to take pictures of the ‘linguistic landscape’ around schools and their surrounds, in fact anywhere written text was evident. Then they showed these images to the children—pictures of wall signs, advertising, hawker stalls, textbooks, classroom posters, even street rubbish—and asked them to comment on what they saw. That allowed them to start a discussion on what the children knew about food, diet and nutrition.

“We now have evidence to show to educational authorities that students are noticing these messages,” says Professor Lesley Harbon, Head of the School of International Studies at the University of Technology Sydney.

“We have shown the methodology works. Besides education, our results should also be of interest to agricultural authorities, and advertising and food packaging companies both in Indonesia and Australia.”

To test this approach, Lesley and her colleague Dr Sisilia Halimi from Universitas Indonesia chose 20 schools—10 in Jakarta proper and 10 in Depok, just south of the capital. By taking pictures around each school and its environs, they found they could accumulate a rich source of nutrition-related content that they could sort into categories—those to do with rice, for instance, or fried food, or delivered food. Most of the messages were in Bahasa Indonesia, but some were in English, and there was even one in Sundanese, the local language of West Java.

They then showed a random selection of these images to focus groups of five Year 5 students in each school, and used them to provoke discussion about food, diet and nutrition. Both researchers speak English and Bahasa Indonesia.

The exercise was very useful, Sisilia says. “For instance, the findings showed that in some cases there was a contradiction between what the school expected its students to eat and what was available in the canteen.”

And, since it also provides direct evidence on which nutritional messages work and which do not, the approach could also be used to provide information to help educators design curriculum materials and health authorities design effective messages about diet and nutrition.

“The results really encouraged us to extend the work to a different age group of children,” Lesley says.

“We think an older age group, such as teenagers in middle school, is likely to provide a different set of perceptions compared to the younger children who might think there is a required response.”

Lesley would also like to repeat the exercise in Australia. The approach could be very useful for comparative work on differences in attitudes to nutrition in different places and segments of society, she says.

The study is being prepared for publication in an academic journal.