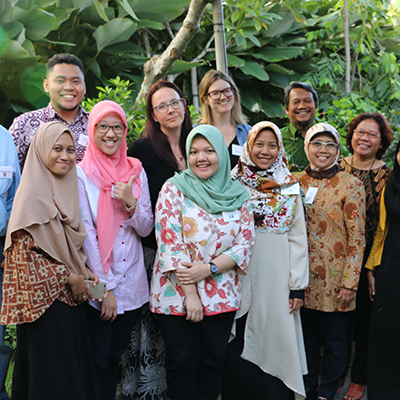 Indonesia and Australia’s rising burden of non-communicable diseases (NCDs) is being tackled with a suite of projects designed to bring attention to risk factors early in life and improve overall health.

The work, which is supported by The Australia-Indonesia Centre, focuses on three areas: tobacco use, mental health and improving communication between healthcare providers and young people.

Funding for nine projects in Indonesia comes from The Australia-Indonesia Centre’s Health Cluster, with the aim of building healthier, more empowered communities for generations to come.

NCDs such as diabetes, cancers, cardiovascular disease and mental disorders are the world’s leading cause of morbidity and mortality in adults. Prevention is a critical part of reducing this burden.

In Australia, 91 per cent of all deaths are now attributed to NCDs, with risk factors such as tobacco use or obesity fuelling the trend.

However, these diseases are no longer just a problem for wealthy countries. Issues including globalisation, ageing populations and urbanisation have led to an increased burden in emerging economies.

Professor Susan Sawyer, Health Cluster Leader at The University of Melbourne and Director of the Centre for Adolescent Health at Melbourne’s Royal Children’s Hospital, says the collaborative nature of the work means both countries could learn from their respective health challenges.

“Non-communicable diseases have been prominent contributors to the burden of disease in Australia for many decades, but it’s a much newer profile of health for Indonesia,” Susan says.

“Being historically a very poor country, Indonesia still has an excess burden of what’s typically seen as the diseases of poverty—such as high rates of maternal mortality, under-five mortality, malnutrition, sexually transmitted infections and HIV, and infectious diseases such as diarrhoea, pneumonia, tuberculosis and malaria.

“As the country is getting on top of these conditions, there’s been a rapid shift towards the health problems that we see in Australia—stroke, cardiovascular disease, diabetes, and injuries from road traffic accidents. This shift in health profile requires a very different response from public policy, as well as from the health care system, including medical professionals.”

The new projects, which commenced in November 2017, are expected to see results by mid-2018, and focus on the following three areas:

Tobacco consumption in Indonesia is among the highest in the world, including in young people. One-third of boys aged 13­–15 are smokers, while the proportion of 20-24-year-old Indonesian males who smoke is higher than in any other country (at 56 per cent). Preventing the uptake of smoking is critical in reducing the burden of NCDs, particularly in an environment where tobacco companies aggressively target young people.

Dr Becky Freeman from the School of Public Health at The University of Sydney, and Dr Susy Sebayang, from Universitas Airlangga’s Faculty of Public Health will conduct an audit of cigarette retailers in Denpasar, Bali, to gauge how tobacco promotions are enticing young people into taking up smoking.

“It’s a tobacco industry paradise where tobacco is still advertised on television, it’s cheap, you can buy single sticks of cigarettes, which makes them incredibly accessible to young people, and you don’t even have to be 18 to legally buy cigarettes.”

The increasing uptake of smoking among children and adolescents in Indonesia reflects that Indonesia is yet to put in place the suite of public policy interventions that are required to contain the tobacco epidemic elsewhere, as has occurred in Australia.

A project led by Hasna Pradityas, Programme Director of Smoke-Free Agents, aims to raise awareness of NCDs caused by tobacco, denormalise smoking and encourage Generation Z to be a tobacco-free generation. Its focus is to help create tobacco-free schools in the Jakarta area.

Another project aims to denormalise smoking attitudes among teachers and junior high school students aged 14–15 living in Jakarta. Anindita Sitepu, Programme Director at the Center for Indonesia’s Strategic Development Initiatives, will work with teachers to integrate a learning module about the negative effects of tobacco use into the existing curriculum.

These two projects are being led by community-based organisations that actively incorporate youth leaders in their work. They will be using young peer-support volunteers to assist teachers, hosting workshops around leadership and healthy decision-making for school students.

Most major mental disorders in adulthood have their onset in adolescence, making early detection and treatment critical for future quality of life, economic independence, and access to education and employment.

Research shows that these disorders contribute up to 15 per cent of the total disease burden for adolescents in Indonesia, yet there is a dearth of quality data on the risk factors or the level of severity and impairment.

Two projects will tackle this knowledge gap. Professor George Patton, Professorial Fellow in Adolescent Research at The University of Melbourne, and Dr Indang Trihandini, Lecturer at Universitas Indonesia, will lay a foundation to collect minimally sufficient data to address adolescent mental health problems and their causes.

George says it will help measure the scale of the issue in Indonesia.

“In many low and middle-income countries mental health problems are common in adolescence and they have substantial consequences, not only in terms of risk for continuing disorders, but they can also be very disruptive to a person’s pathway through education and employment and their capacity to parent,” George says.

In another project, Professor Jane Fisher, Director of the Jean Hailes Research Unit at Monash University will partner with Dr Fransiska Kaligis, a specialist in the Department of Mental Health Sciences at Universitas Indonesia. They will develop a culturally appropriate psychometric instrument to identify common mental disorders among young people in Indonesia.

Communicating with young people can be challenging. But beyond public health approaches to prevention, early intervention is the key to reducing non-communicable disease burden. One approach is ensuring that healthcare providers can effectively engage with young people, a necessary step to exploring healthier lifestyles.

A project led by Dr Yoga Devaera, from the Department of Child Health at Universitas Indonesia, and Associate Professor Lena Sanci, Deputy Head of the Department of General Practice at The University of Melbourne, will look at the Australian medical curricula with the aim of developing a similar framework to close the knowledge gap around adolescent health for Indonesian health professionals and medical students.

Lena is also partnering with paediatrician Dr Bernie Medise from Universitas Indonesia to help parents of adolescents with chronic illnesses understand how to promote their children’s healthy development.

In a separate project, Bernie will partner with Andrea Krelle from the Centre for Adolescent Health within the Department of Paediatrics at The University of Melbourne to develop a short course to build leadership skills for Indonesian professionals whose future careers will focus on the prevention of NCDs in adolescence.

The burden of NCDs requires health professionals to engage more proactively with adolescent patients around behaviour change. Dr Mora Claramita from Universitas Gadjah Mada’s Faculty of Medicine will also work with Lena to develop an education program for general practitioners to help them discuss the lifestyle risks associated with NCDs with adolescents.