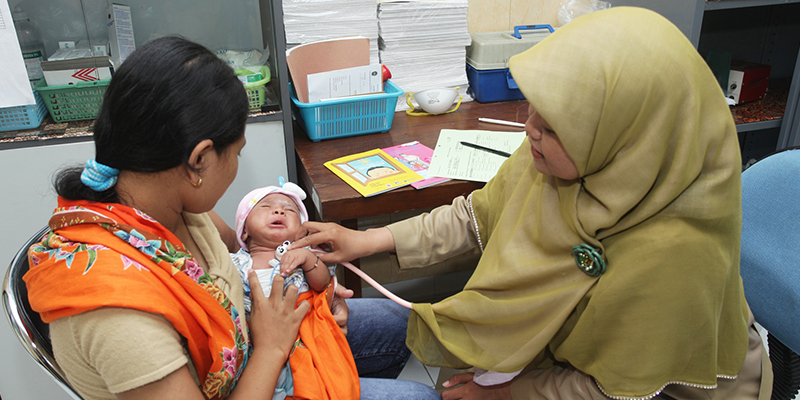 Women in Indonesia were 21 times more likely to die from childbirth than women in Australia in 2015. Many pregnant women in Indonesia, particularly in remote areas, do not regularly visit health clinics and so complications are not detected and dealt with early enough.

In 12 villages on Indonesia’s Madura island, student midwifes are accompanying pregnant women to antenatal classes and encouraging them to give birth with a skilled health provider present. Researchers from Airlangga University and The University of Sydney hope this will improve the detection of high-risk pregnancies, lead to more timely referrals and ultimately reduce maternal mortality rates.

“There are too few trained healthcare staff in rural communities. It’s frustrating when we have been referred a patient with a life-threatening condition who, if we had seen weeks or months earlier, could have been easily treated,” says Dr Budi Prasetyo, an obstetrician and gynaecologist at Airlangga University in Surabaya. Budi is coordinating this project, which is funded by the Indonesian Directorate of Higher Education (DIKTI) and The Australia-Indonesia Centre.

The World Health Organisation (WHO) recommends that women have at least four check-ups during their pregnancy to detect life-threatening conditions such as high blood pressure, fluid retention and protein in the urine (preeclampsia).

Women living in Bangkalan, Madura, where the research is taking place, often do not have access to transport to make the lengthy journey to a health centre. They may also require lengthy approval from their family members for medical attention, or may associate hospitals with sickness and death, which can make them afraid of accessing modern medical services.

“Universitas Airlangga is taking a very pragmatic approach to solving this problem by using midwifery students who are a good source of information for these women and perhaps less threatening and have more time than doctors,” says Associate Professor Kirsty Foster, who is Head of Sydney University’s Medical School and Health Cluster Co-Lead of The Australia-Indonesia Centre.

“Not only will it lead to improved health services, but it is also opening students’ eyes to the reality of midwifery on the ground,” says Kirsty, who also helped develop the research protocol.

Since this research started in April 2015, there has been a slight increase in early detection rates for high-risk pregnancies, suggesting the approach is working.