Home » Knowledge Bank » Sustainable agriculture » The importance of health for farming, and of div… 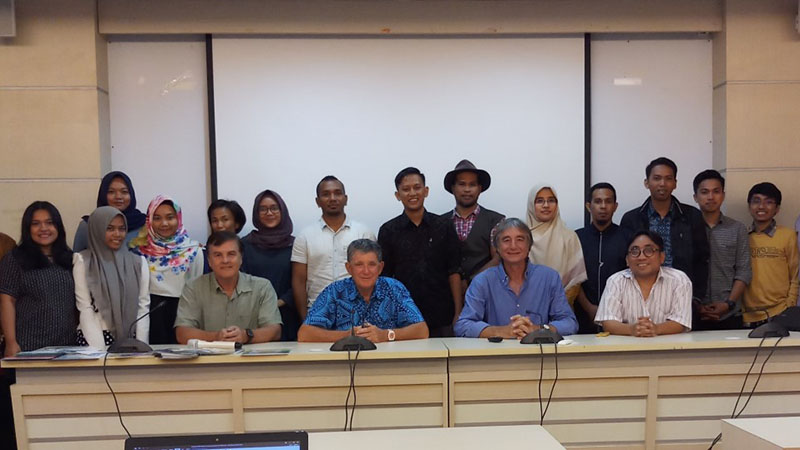 Researchers looking at cocoa farming practices in Sulawesi have delivered an impressive range of findings to diverse local audiences, based on a 2016-2018 study of food and agriculture that also evaluated community health and economics.

The Australia-Indonesia Centre project looked at the ‘Sustainability and profitability of cocoa-based farming in Sulawesi’ and brought together researchers from Universitas Hasanuddin, the University of Sydney and Institut Pertanian Bogor.

Cocoa provides a significant income for Indonesia’s economy, but production has sharply declined since 2011. This study aimed to identify opportunities to improve cocoa quality and productivity, to understand how farmer health and financial literacy affect the implementation of good agricultural practices, and to evaluate the impacts of certification on producers – something increasingly demanded in Australia and other major export destinations, but poorly understood in terms of the benefits reaching farmers.

Read an earlier article about the study here.

Among the various findings were strong links between cocoa yields and farmers’ health, vindicating the interdisciplinary approach which ultimately provided many lessons in research practise on top of the core findings.

First, the team presented their core findings in Makassar, South Sulawesi, on 9 April 2018, and two days later in Polewali, West Sulawesi, where the study was carried out.

These workshops were attended by a broad mix of stakeholders, including government health and agriculture officers, cocoa industry groups, NGO representatives, health centre staff and volunteers, village heads from the four participating villages, cocoa-farmer representative bodies, and some of the farmers themselves.

“The presentations addressed the importance of health and financial literacy for increasing sustainability and profitability,” said Dr Sudirman Nasir, lecturer at the Faculty of Public Health at Universitas Hasanuddin who coordinated the health survey team. Health and financial literacy were two key areas for improvement uncovered during the study.

Head of Polewali’s District Health Office Syuaib Nawawi was pleased to see economic and health aspects of farming discussed together for the first time. “I hope we can continue this collaboration so we can work more effectively to increase the welfare and health of our farmers,” he said.

The research team then presented to academics from fields as diverse as their own on their discoveries around interdisciplinary research practise itself.

“This AIC project really brought health and agriculture together,” said Thomas Soem, head of International Research and Development at the University of Sydney. “We all knew the potential but this project has seen it realised.”

The third workshop was held back at Universitas Hasanuddin in Makassar on 12 April. Among the participants were academics from schools of Public Health, Medicine, Agriculture, and Economics. The day also covered the core study findings and information on the Australia Awards and other opportunities for tertiary study abroad, shared by a representative from the Australian Consulate.

The study has helped to demonstrate the value of an interdisciplinary approach, representing the future of collaborative research between Australia and Indonesia.

Read about the Village Livelihood Program that sprung from this study