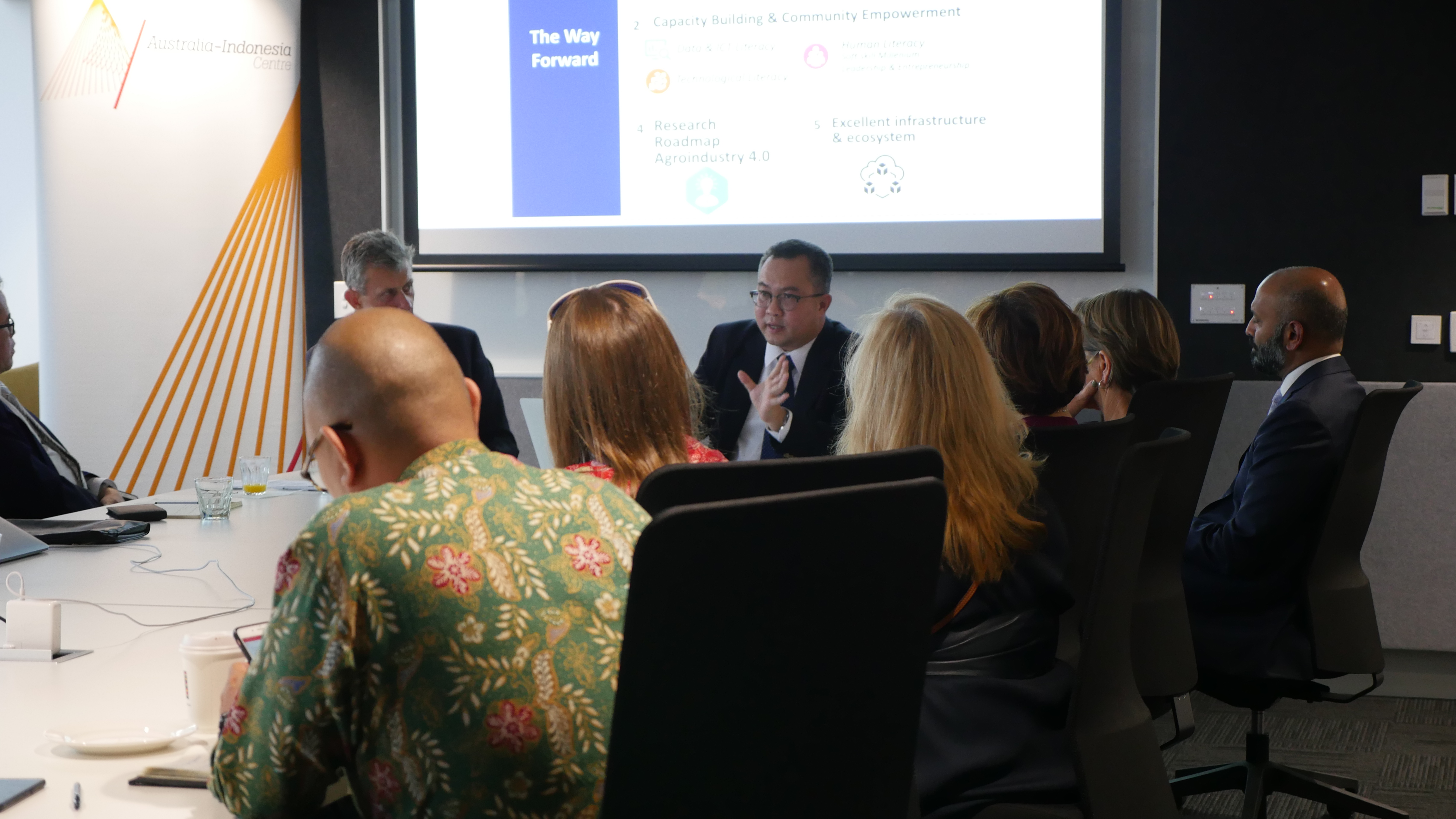 In a discussion moderated by Professor Edward Buckingham, Dr Arif presented on his Agro-Maritime 4.0 concept, aimed at addressing global food, energy and environmental challenges in the era of the Industrial Revolution 4.0.

Marked by the expansion of the ‘internet of things’ (IoT), artificial intelligence and the utilisation of big data, among other ‘disruptive technologies’, the Industrial Revolution 4.0 is changing the face of agriculture in Indonesia.

With predicted agricultural labour deficits in the future, Dr Arif argues the time to act is now: ‘If we don’t have labour, and we don’t have technology, there will be a crisis for agriculture,’ he warned.

The crisis can be averted, he explained, by developing technology that not only responds to this labour shortage, but also improves the efficiency of the agricultural sector and boosts its competitiveness on a global scale.

In response, IPB has developed the concept of Agro-Maritime 4.0, which integrates both land and marine management across complex social, economic and ecological systems in the era of disruptive technology. From smart irrigation systems, to precision farming, to smartphone-based pest management, to blockchain-enhanced supply chain and logistics, Dr Arif highlights that the integration of technologies such as satellites, drones, big data, and IoT has already proved to be vastly beneficial for agriculture in Indonesia – indicating that there still remains much potential for the application of the Agro-Maritime 4.0 concept.

In equal measure, capacity building through digital literacy programs for farmers is critical. IPB has developed an educational hub for farmers and fishers (called the Tani Center) which offers training related to technology use and implementation, marketing, and soft skills such as management. IPB also recognises that educating the next generation is another piece of this larger puzzle, and aims to build a new curricula founded in entrepreneurial skills such as flexibility, adaptiveness and leadership.

Dr Arif concluded by highlighting that support from government in the form of affirmative policies to empower farmers and the building of effective infrastructure, particularly in rural areas, is greatly needed moving forward.

By nature, the Agro-Maritime 4.0 concept is interdisciplinary and participative, he said, and requires government, the private sector and research and development to come together.

Dr Arif was joined at the dialogue by colleagues and experienced AIC team members Dr Nunung Nuryartono, Dean of Economics and Management, and Dr Iskandar Siregar, Director of International Collaboration. Dr Iskandar was co-lead of the AIC’s food and agriculture research stream and Dr Nunung was the lead researcher on their major project looking at the sustainability and profitability of cocoa farming in Indonesia.

One new tech player in agriculture in Indonesia is the online farmers’ market TaniHub – which President Joko Widodo mentioned in the second presidential debate, and whose co-founder spoke with AIC Digital Economy Fellow Helen Brown in 2018.