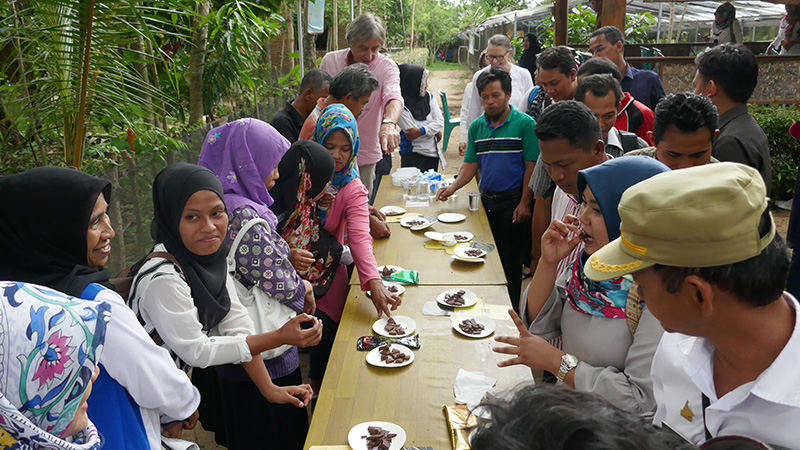 In West Sulawesi, 400,000 families depend on cocoa farming. But downturns in price and production are pushing families into poverty, with profound implications for public health.

Fifty per cent of children stunted, 90 per cent of males smoking, and an increasing number of obese women. These were the results from a health and livelihood survey of 140 households in the subdistricts of Anreapi and Mapili.

A team of Indonesian and Australian researchers want to address these issues.

The households surveyed are all located in cocoa-producing villages, and they’re under strain with the downturn in Indonesia’s cocoa production. So the team is looking at links between smallholder productivity, health and livelihood, to identify which public health factors have the biggest impact on livelihood in cocoa farming areas.

Cocoa is currently a major livelihood provider for farming families across Indonesia. The supply chain supports more than 400,000 smallholder families, as well as enterprises and services. The crop also provides essential products for international export, including to Australia.

But lower farm yields have led to a severe decline in national production (320,000 tonnes in 2016, compared to 475,000 tonnes in 2006), with consequences for smallholder producers’ incomes. The movement of younger family members to towns and cities for education or work opportunities also poses a significant problem for growing cocoa, which is a labour-intensive crop.

The research, supported by The Australia-Indonesia Centre, is identifying opportunities for improving farmers’ incomes, and boosting the involvement of other members of rural communities, including youth and women.

Two surveys have been conducted: one on health and the second on economic livelihood issues. A workshop held in July 2017 provided feedback to the district departments of health and agriculture, health clinic staff, mid-wives and village leaders, as well as farmers who participated in the surveys.

The health survey results are being used to develop a village health curriculum, and will contribute to Masters research for students at Institut Pertanian Bogor (IPB) and Hasanuddin University (UNHAS) in partnership with The University of Sydney.

How specialising can increase income

The researchers also want to identify opportunities to improve cocoa quality, productivity and certification (increasingly sought after by consumers in Australia), production of niche chocolates (which unlike coffee, are still undeveloped in Indonesia) and business diversification to support rural economies. Incorporating small livestock into cocoa production potentially converts waste products into meat and valuable organic fertiliser. Goats in particular are a valuable income supplement to cocoa farming families.

More than 30 growers, village leaders and government officers attended, to discuss the factors that determine cocoa prices in the region. These include the weather in West Africa (where more than 70 per cent of the world’s cocoa originates) the age of the trees and farmers, and government support policies.

Grant Vinning, the marketing specialist on the project, says that around the world, demand and preference for different chocolate types differs between three areas: North America, Europe, and the rest of the world—including China, India, and the Middle East.

These preferences impact on the price received by cocoa growers in Western Sulawesi, says Grant. He arranged for a tasting of ‘niche’ chocolates using cocoa from Java, Madagascar, Venezuela, and Papua New Guinea, to demonstrate the different tastes that can be achieved with different types and percentages of cocoa.

He also showed the participants how to convert the prices they see on the internet back to local prices, after taking into account shipping and other costs.