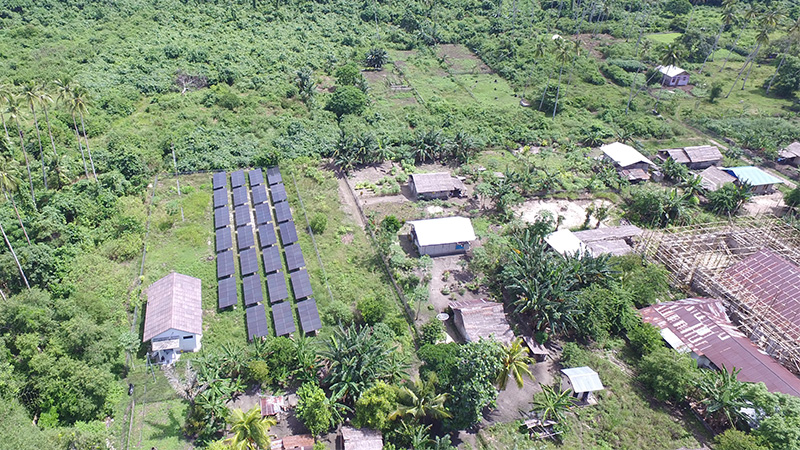 Four years ago life in Pulau Bau, a village on a tiny island off North Maluku in Indonesia, was transformed. The community was supplied with electricity via small-scale diesel generators and a state-of-the-art solar energy system with battery backup. Every house was receiving some electricity—not a lot, but some. But early in 2017 the system broke down, and the cost to repair it (equivalent to AUD$20,000) was beyond the budget of the community.

The Indonesian government is committed to providing energy to all citizens by 2020. It isn’t going to be easy for a 5,150km-long archipelago where more than 65 million people, many in remote communities, currently go without. An Australia-Indonesia Centre project is working to identify the opportunities and challenges in meeting the real needs of these communities.

Technology alone won’t deliver. The solutions will need to be tailored to community aspirations, and be resilient so they keep working when the engineers go home.

“There’s a gap between the provision of technology and the development of capacity to maintain that supply,” says Dr Sebastian Thomas, a climate and sustainability researcher with The Australia-Indonesia Centre and The University of Melbourne who is co-leading the work.

“So across Indonesia, you’ve got instances where governments have paid engineers to come and provide a solution, but once the solution fails there’s no way to keep it going.”

Training in operational and technical management processes and alternative financial approaches should all be considered, Sebastian says.

The research team is working with community members, leaders, and representatives from different levels of government and industry in Indonesia. They’re looking to create a way for these communities to participate in sustainable national energy development policy in a way that suits them—and while the team is currently preparing for pilot study sites in Indonesia, the approach is applicable to areas of Australia.

Between November 2016 and June 2017, the team visited four communities in West Java (Cinta Mekar, Buni Kasih, Tajur, and Ponggang) and three around the northern island of Morotai (Daruba, Pulau Bau, and Korolai), all of varying sizes, demographic makeup, and levels of electricity supply.

“We’re working to do several things: one is to establish a coalition of people talking about the same issues right across the policy network. Another is to work with communities to ask what they need and want, if energy is going to be provided,” Sebastian says.

“It might be the case that you spend a lot of money to electrify a community but it’s not giving them what they really need. There need to be conversations around what its purpose is, where it’s going to be most useful, and how it might better be applied.”

During their discussions, the team noticed that health, education, and local livelihood needs tended to be central concerns for communities, whereas government authorities tended to focus on broader economic development.

“Remote communities have to take food from the environment around them. When they have growing populations, if there aren’t management systems in place, those resources can become depleted.

“For example, as people fish more they go deeper and deeper, they use more fuel which costs them money, and do more damage to the marine environment. So if you can provide electricity not just to watch television at night but to give them internet access and education opportunities, to allow them to create home eco-tourism businesses, to attract more income, then you tend to find that there are livelihood opportunities that can be built through the provision of energy, there’s capacity building, and you’ve got a way to alleviate the pressure on the environmental systems such as food and other basic resources.”

Being part of The Australia-Indonesia Centre has been a huge advantage for the researchers.

“The Centre is a network that is, in my experience, both remarkable and unique in many ways. We’ve got outstanding connections to people across a range of sectors, we speak to and work with people in government at various levels, as well as people in business and industry. It’s an outstanding example of a bilateral initiative that really crosses stakeholder interests and groups and those sorts of processes are the ones that open minds and create positive change.”