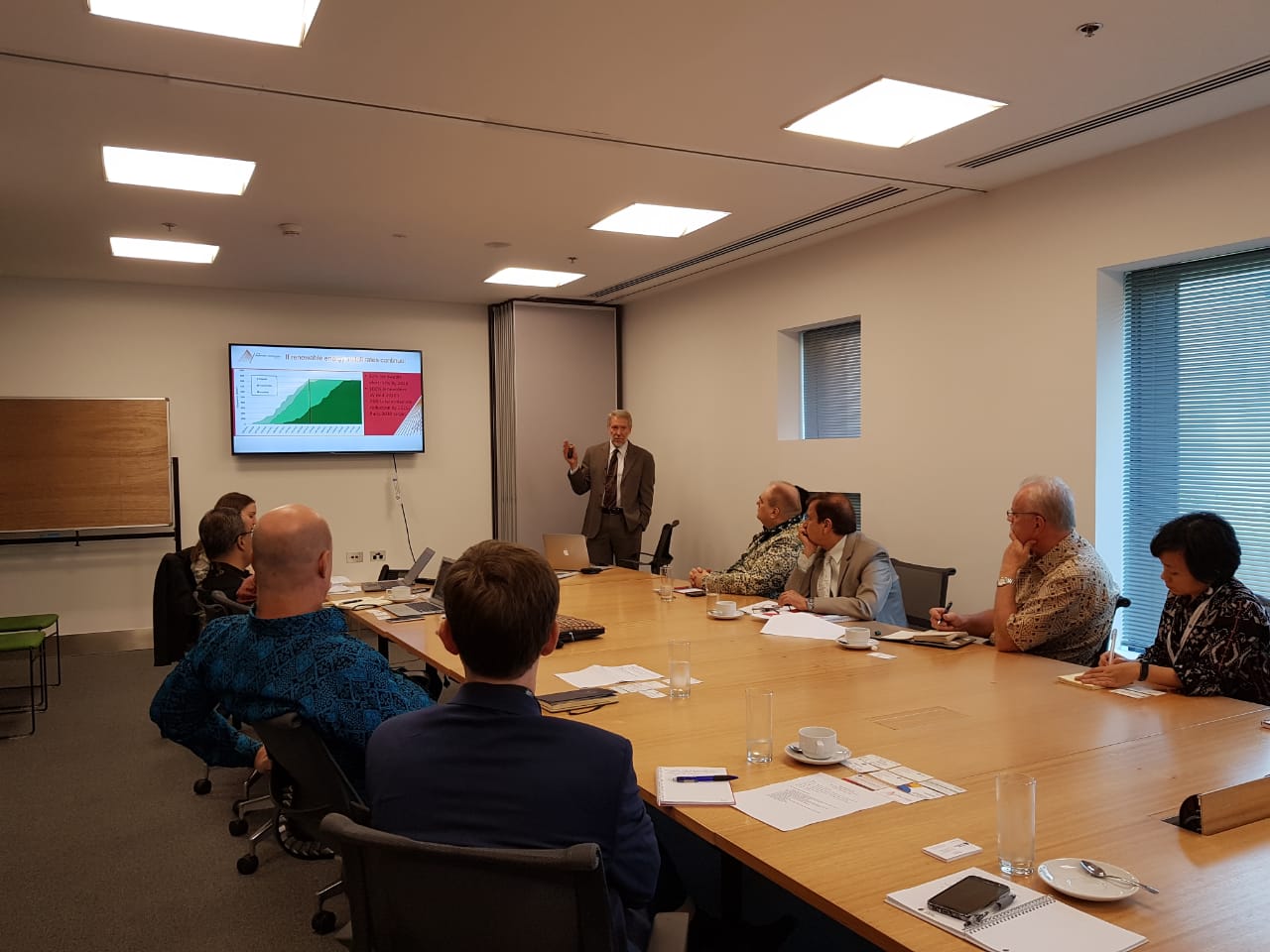 Baldwin, from the Australia National University (ANU), was one of three leading academics to present. He focused on the recently completed Indonesian Energy Technology Assessment (IETA), funded by The Australia-Indonesia Centre, which among other outputs has provided energy cost projections for new power generation developments in Indonesia, for 14 different generating technologies.

Local and international organisations and energy providers were invited by the Embassy to hear about findings and recommendations from the trio’s past few years of work on energy in Indonesia. Carly Main, second secretary at the Embassy, moderated the event.

“We were very interested to hear about the projects undertaken by researchers from the ANU, IPB and ITB,” Main said.

Professor Baldwin opened with an overview of the AIC Energy Cluster’s work, identifying a number of common energy issues faced by Australia and Indonesia, and then briefed the audience on the IETA project, and how it will prove useful.

“Indonesia has a thirst for energy,” Baldwin said, due to its expanding economy and rapid urbanization. The country’s energy expansion, he summarised, is projected to need an extra 35 GW of electricity generation by 2025, on top of its 55 GW capacity as of 2016.

“If planners and investors are to effectively manage this energy transformation, up-to-date and rigorous estimates of the cost of various electricity generation technologies will be required,” the IETA report states.

The Indonesian government is also aiming for 23 per cent of all energy to be from renewable sources come 2025. Good news here in the IETA report is a prediction that the cost of producing renewables should drop rapidly as global uptake of those technologies increases. Australia, by comparison, if the current rate of renewable energy installation continues, will reach 50 per cent renewable electricity by 2025.

Professor Baldwin ended his session looking ahead to the future prospects for energy research collaboration between Indonesia and Australia. Among them were applying various AIC Energy Cluster research in South Sulawesi, the region with the best prospects for wind energy production, and also more study of solar energy in Indonesia. Moreover, as the current IETA was conducted in Jakarta, he stressed the importance of extending the project to other areas in Indonesia.

Professor Tambunan then presented his AIC research project on biomass fuels in Indonesia. Biomass fuels (often waste and byproducts from agriculture and forestry work) are burned to produce steam or heat, which is used to generate electricity. Tambunan explained that Indonesia has abundant biomass resources in its forests, including palm oil forests, with the largest potential in Riau Province in Sumatra, followed by Central and East Kalimantan, and East Java. Those three islands, he said, account for 95 per cent of Indonesia’s total available bioenergy.

“Since Indonesia is currently a net fossil fuel importer, it is urgent and important to find optimum ways to utilize this biomass resource for modern bioenergy,” stresses Tambunan’s project report.

The third presentation, by Professor Pasek, was on the importance of a renewable energy-based power plan, with particular reference to certain zones. He said smart grids were the best way forward, as unlike conventional grids, which aggregate multiple networks, and in which most of the systems are manually controlled, a smart grid is the modernisation of a transmission and distribution grid. Smart grid integration of renewable energy sources is important to Indonesia due to the availability of significant biomass, solar, wind, and hydropower resources.

A question and answer session concluded the day. Question topics included the relationship between projected costings under IETA and actual project development costs, and pumped hydro electrical storage and the potential for connecting the water involved with other economic uses such as agriculture.