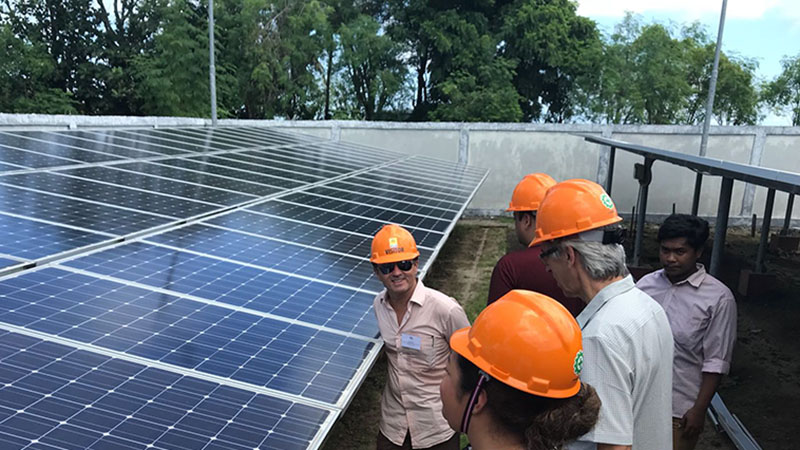 The three-day event in late March 2018 featured discussion and project visits with Indonesian and Australian leaders from energy businesses, national and district governments and universities, as well as local South Sulawesi communities.

“Collectively there is [now] greater knowledge of the scale of needs and opportunities in renewables in eastern Indonesia” reports AIC senior researcher Dr Max Richter, who coordinated the event alongside the Australian Consulate in Makassar.

A seminar and workshop on day one focused on how best to approach renewables in the region – researchers shared the social and regulatory challenges they had identified, and business representatives provided investment and technology expertise. Presenters included leaders from Indonesia’s state electricity company (PLN), Energy Ministry, and Chamber of Commerce; Western Australia’s Minister for Mines and Petroleum, Commerce and Industrial Relations, Electoral Affairs and Asian Engagement Bill Johnston MLA; and researcher practitioners including the AIC’s Dr Sebastian Thomas and Dr Ariel Liebman who lead the afternoon workshop.

Several district government heads attended, who, as Dr Richter notes, “are instrumental to the success of regional projects”. They are vital points of contact for foreign investors, who must win district government approval, and that of PLN, before any power investment in Indonesia.

Day two saw a visit to the largest renewable energy project by an ‘independent power producer’ in South-East Asia. The Equis Energy (now Vena Energy) wind power farm under construction in Jeneponto regency will eventually feature 20 turbines spread over 30 hectares feeding 65 megawatts into PLN’s Jeneponto substation. Indonesia aims to gain 35 gigawatts of power production nationally in the next few years, while tripling its overall renewable energy contribution by 2025. Notably, for renewable projects of over 10 megawatts, up to 95 per cent foreign ownership is allowed.

Day three began with a 30-minute boat trip to the tropical island of Salemo. Residents of many islands in this Spermonde Archipelago are among the 18 million Indonesians without electricity – mostly in remote environments where off-grid renewable power, as Salemo now has, is often the easiest solution. Salemo is therefore a valuable case study, and the visitors heard about supply challenges and the community’s needs, such as technology for drying seaweed and more ice production for fishing industries.

“The success of the program,” says Dr Richter “will ultimately be measured by the projects and collaborations that grow out of it”. Discussions are already underway for six project proposals, two multi-sectoral collaborations, and market testing for various products including solar-powered fish freezers.

The Australia-Indonesia Centre and the Australian Consulate in Makassar are both focused on facilitating Australian research and business engagement in renewable energy development in eastern Indonesia. To that end, the AIC Energy Cluster is very interested in exploring collaborative applied research ideas and prospects with all interested parties.