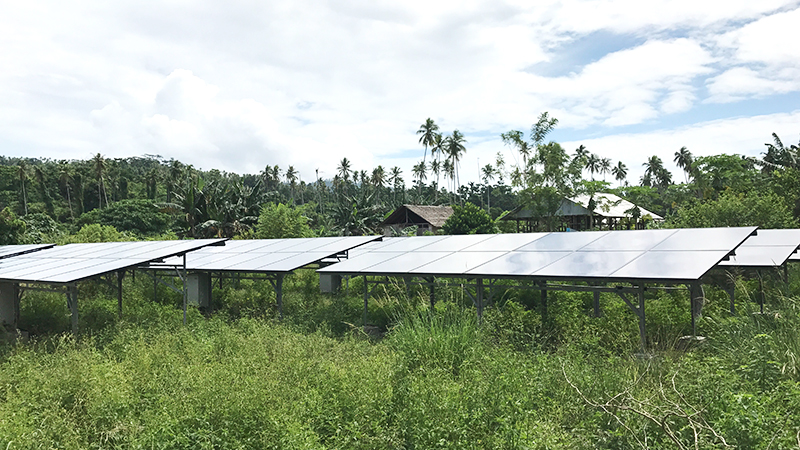 Electricity from photovoltaics and wind are likely the cheapest options for large-scale energy generation in both Australia and Indonesia, according to research from the Australian National University (ANU) and Institut Teknologi Bandung, supported by The Australia-Indonesia Centre.

“Reductions in the cost of photovoltaics and wind, coupled with developments in high-voltage direct current (HVDC) and off-river pumped hydro energy storage, allows photovoltaic and wind to strongly compete with all fossil, nuclear and renewable alternatives,” says Professor Andrew Blakers, who led the project along with Dr Rachmildha Tri Desmana.

“Indeed, photovoltaic and wind are the cheapest options for new large-scale generation capacity in both Australia and Indonesia.”

The team investigated the potential for renewable energy, principally photovoltaics, to provide most of the Indonesian and Australian electricity supply by 2040, through the development of a large-scale interconnected system for the generation, storage and transmission of the renewable energy.

“Indonesia’s potential is greater, in relative terms, than India or China because it is an equatorial country without a winter season.”

Andrew says only about 0.1 per cent of Indonesia’s land would be needed to meet all electricity requirements from photovoltaics and wind.

But the researchers point to swift price reductions over the past five years for the growth of photovoltaic and wind technologies, predicting they’re likely to grow into “enormous industries over the next decade.”

Currently around 65 million Indonesians are without power, many of whom are in remote communities. In order to provide electricity to these people, and accommodate the growing population and rising living standards, massive scale-up of the electrical system is required.

Most of the country’s energy is generated via a mix of coal, oil and gas, similar to Australia.

Following energy blackouts, the promise of intervention from American billionaire Elon Musk, and an announcement from the Federal Energy Minister Josh Frydenberg in September that it will cost consumers up to $50 million to “keep the lights on and the fridges running” this summer, Australia’s energy security continues to be a hot topic.

Pumped Hydro Energy Storage was the primary storage technology examined by the team (which makes up about 99 per cent of all energy storage because of its low cost relative to alternatives such as batteries). Storing energy using pumped hydro means the electricity doesn’t have to be sold as it’s being made, but can be saved for later.

“Indonesia is not short of mountains,” Andrew says.

“But only the very best, most favourable sites will be needed to stabilise an Indonesian grid that has very high levels of wind and photovoltaics. Almost everywhere people live there are large numbers of mountains; volcanos with very large heads—that’s the height difference between the upper and lower reservoir. And a big head for pumped hydro is a very favourable thing because it reduces costs.”

Connection of the two nations via an HVDC transmission line and also interconnection within Indonesia was also explored.

“High voltage DC cables operate at anywhere between 500 and 1,000 kilovolts, up around a megavolt,” Andrew says.

“Really big systems are now being built that can transmit 12 gigawatts over 3,000 kilometres, with a loss of 10 per cent. In other words, you could move power from one end of Indonesia to the other and only lose about 10 percent.

“That means that when the weather is poor, for example, in Java, but is favourable in the Eastern provinces, you could move solar and wind power from the east to the west. And when the weather moves from the west to the east, the power goes the other way.”

The installation of HVDC technology is already being explored by the main electric utility in Indonesia, and there are three existing HVDC installations in Australia as well as many others around the world. The team collected information on the electricity use of five to 10 typical Indonesian islands, and conducted a review of the recent literature for HVDC technology.

“There’s a lot of experience being gathered around the world,” Andrew says.

“It works extremely well. And the fact PV systems can be installed in 18 months from first concept to ready-to-go means that this experience can be rapidly implemented in Indonesia.”

Australia could store 1,000 times more renewable energy than it needs

If pumped hydro storage facilities were built at just a handful of these (spread out) sites, Australia could run on renewables alone, he says.

“Pumped hydro, high-voltage DC interconnectors between the states, solar photovoltaics, wind, batteries and demand management can do the whole job.

“Not just the whole job for electricity, but the whole job for energy—electrify land transport, electrify heating and cooling and you could make 75 per cent cuts in Australia’s greenhouse gas emissions. And I think this is going to happen over the next 15 or 20 years.”