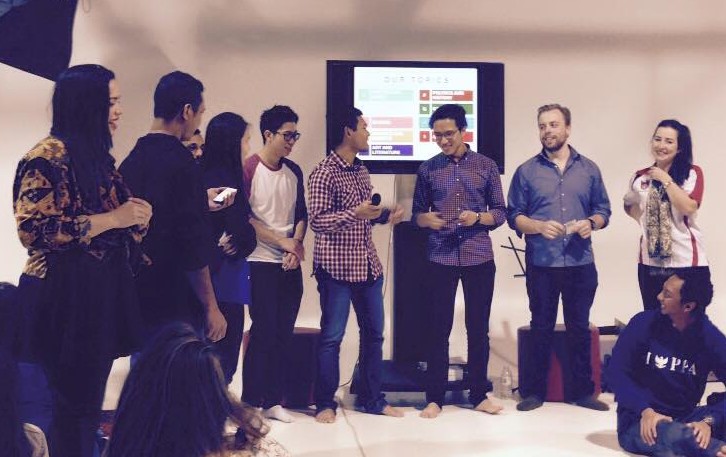 Having been involved in teaching Indonesian to Australians and others for more years than I care to recall, permit me to pass on a few of the insights I have gained. We can be proud of the achievements of all the teachers and students who ‘have a go’ and put their knowledge into practice, in the process of communicating in Indonesian, a language not related to English, and in fact subtly different from English in the way it works.

We’re lucky in some ways: Indonesian doesn’t have a complicated script like Japanese, or tones like Chinese, and its sounds aren’t too difficult to get your tongue around. But it does have plenty of grammar to remember, with forms that vary and make a big difference in meaning, for example me- and di-. You can’t afford to ignore them. Having taken all this into account, and learnt a lot of useful words, we can be pretty sure of getting the message across. It’s time to venture into real situations of communication for exchanges of information and opinions.

This is where it gets more problematical, because there are always two sides to the exchange that need to be taken into account. Feedback from some Indonesian friends suggests that from their angle it doesn’t always go without a hitch. Without a doubt they appreciate the fact that foreign visitors take the trouble to use their language, as it’s a compliment and implies a positive attitude toward Indonesians, their language and country. But what happens if the speaker gets it wrong? The effect is negative: it jars on the ear, and it may even cause offence. Why is this?

What needs to be understood in Australia is that the present generation of high-ranking Indonesians, and indeed Indonesian officials of many levels, now often have a good grasp of English, certainly compared with those of thirty years ago. For foreign visitors – however anxious they are to communicate effectively – to speak bad Indonesian to their hosts, from an Indonesian point of view may appear very condescending. Speaking in this way could be taken to imply that the Indonesian officials or other high-ranking people do not themselves understand English, and furthermore, cannot afford to pay a good interpreter to make up for ‘their deficiencies’.

For years we have stressed that language is part of culture. In other words, a verbal exchange (conversation) takes place within a social and cultural context. What does this mean? As soon as we meet someone, and start talking, we have entered into a relationship. We have a ‘feeling’ for who we’re talking to, and how we relate to them. This may not be immediately apparent to your average Aussie, who can say “G’ day” to almost everybody, even strangers, at any time. But when speaking Indonesian we need to develop social ‘antennae’ – sensitive feelers – and gauge the nature of the relationship we’re embarking on.

For example, if it’s a formal setting (and this is quite likely; in the early stages), then our speech-partner will possess some sort of official status. To acknowledge this status is a must. We show that we understand where they stand, and where we stand in relation to them.

Of course how in practice one ensures that one’s use of Indonesian is appropriate, and not likely to offend or cause concern, is a difficult matter. One approach would be for the Australian party to try to ascertain in advance how much Indonesian on the foreigners’ part would be required, and would be acceptable, and whether an Indonesian, or even an Australian-supplied interpreter might be desirable. This would certainly be the case in a fully professional situation. But then there are also many less formal situations that can arise. Here it is probably up to the visitor to be as discreet as possible in how they use Indonesian, making sure they do not inadvertently offend or amuse the hosts.

The first example illustrates the mistaken expectation that direct or overly literal translation will work. On one occasion when I was teaching Indonesian a young male student arrived very late for a class. Perhaps to make amends for his lateness and to create an impression for his teacher, he said to me: ‘”Hari baik, olah raga!” What he was trying to say to me was: “G’day, Sport!” The literal translation of the words he used is: Day Good Sport. But of course in Indonesian what that sentence means is not all clear. The proper way for saying good day is “Selamat Pagi” I “Selamat Siang” etc., not “Hari baik”. More importantly, in English or Australian, the use of sport in “G’day, Sport!” is idiomatic, meaning “You are a sporting (i.e. decent) guy”. This meaning is not there in the Indonesian at all.

Another amusing, but potentially quite offensive mistake, was made by one of my students on a group visit to a village near Jogjakarta some years ago. One of the villagers brought out her newly born (day-old) baby for the students to see. One of my female students was so taken with the baby that she asked to nurse it. Subsequently she said to the baby’s mother, as politely as possible: “Ibu, babimu cantik sekali”. The mother replied (in Indonesian): “This is not my pig, this is my baby”. (“Ini bukan babi saya, ini bayi saya.”) In Indonesian, ‘babi’ means ‘pig’, and the word for ‘baby’ is ‘bayi’. One should remember that potentially the mother could have been very offended, given that the majority of Javanese are Muslim, that Muslims are prohibited from eating pork and, generally, pigs are regarded as unclean. Nevertheless on this occasion the person concerned, the mother, did not feel insulted but took it as simply a linguistic error, which she corrected.

The third example comes from a more formal context. It occurred at a reception for a group of students I was taking on a tour of parts of Indonesia. Among the hosts of the reception was the governor of the province we were visiting. At the conclusion of the proceedings, one of my students took it upon himself to thank our hosts for their hospitality. Addressing the governor from the podium he said the following: “Atas nama rombongan mahasiswa ini, saya ingin mengucapkan terima kasih atas kebaikanmu”. (On behalf of this group of students, I wish to express our thanks at your hospitality). This was immediately followed by muffled laughter from the Indonesian members of the audience. In fact the student had made quite a good start, but the last syllable of his opening sentence was the problem: kebaikanmu. The mu is a contraction of kamu, a way of assuming a certain familiarity with a person. In speaking to the governor he should have said: “atas kebaikan Bapak” (The respectful word ‘Bapak’ meaning, in this context, you, ‘Sir’).

Let me add, as well, that sensitivity to a situation and to the person addressed is particularly relevant in sentences of requesting. Obviously, if you want to get a positive outcome, you have to get the speech-partner on side – make them feel good, and avoid injuring their feelings of self-esteem. A plain order is out of the question when speaking to the Sultan, the Minister, or the Head of Department. Instead, we make a polite invitation or a suggestion, and there are certain words to express this. In particular, in social contacts, the use of the correct pronoun to refer to your speech-partner is essential. (This may sound awfully elementary to our best students, but it’s worth repeating).

As it happens, Indonesian has a range of alternative pronouns, and the choice of the right one at the right time will show whether you have a ‘feeling’ for the language or not: Anyone who has learned French will be familiar with the difference between tu and vous – well, it’s like that. As indicated by the third example, the Indonesian pronoun kamu (and corresponding suffix -mu) is totally and utterly out of the question to use to an important person, because it implies a degree of familiarity appropriate only toward a younger or socially inferior person. If you don’t grasp this, you run the risk of being thought arrogant, or just plain stupid, and had better switch back to English – which they will probably understand moderately well anyway.

In contrast, the followings ways of speaking are impolite. My first example here is ‘Tutup pintu itu! ‘. This is quite rude because it is an order and too casual. But in Indonesia even the request ‘Tolong Anda tutup pintu itu’, is not really polite, if directed to a person you respect, even though it uses the word please (tolong). It is not polite because it is specifying you (Anda). What is required is an indirect request, along the lines: ‘Please I want to see that door closed, I am not ordering you to do that’ (i.e. ‘Tolong pintu itu ditutup’, as above).

So, grammar can’t be ignored after all. I have noticed that people who have studied Javanese seem to have a better understanding of social relations and appropriate language-use. Without doubt this is because they have been sensitised by the highly developed system of language levels and honorifics that Javanese is famous for. The language expresses the feeling we have for who we are talking to and how we relate. But the idea isn’t restricted to the Javanese by any means – it applies to all users of Indonesian as well.

We are a wonderful field of study here – a veritable playground for sociolinguists! So my point is that in order to be effective, speaking Indonesian has to take the socio-cultural setting of language-use into account. When this is done, just imagine the delight, the faces lighting up, when we not only get the bare message across, but at the same time make people feel happy and proud. Quite a challenge, but well worthwhile!