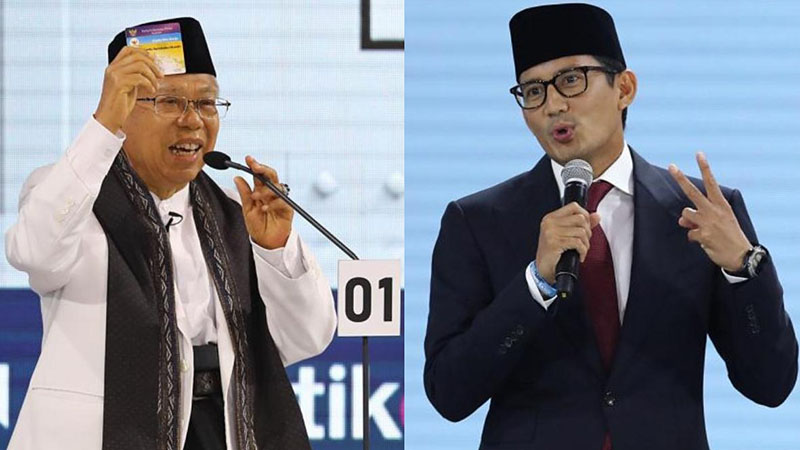 The debate between the vice-presidential candidates was conducted on Sunday 17 March. The debate featured KH Ma’ruf Amin, the 76-year-old running mate of incumbent President Joko Widodo, and Sandiaga Salahuddin Uno the youthful 49-year-old running mate of challenger Prabowo Subianto. Other differences between the two candidates are also clear. Sandi presents as the energetic and urbane entrepreneur with practical solutions related to down-to-earth experiences. Ma’ruf presents as a wise sage, rich in experience and seeking to rise above the fray and beyond the desires of ambition.

This is the third in a series of five debates and the only one to feature only the vice-presidential aspirants. The themes for the debate were education, health, manpower, and social and cultural affairs.

The tone throughout the debate was cautious and polite, lacking the sharp exchanges that other debates have produced. In particular Sandiaga sought to portray himself as very respectful of the religious leader Ma’ruf. Nonetheless there were some mutual criticisms, especially by Ma’ruf on some of the assertions made by Sandiaga.

On this issue candidates were asked what they would do with regard to research, education and innovation as part of efforts to help Indonesia become a major economic power by the centenary of independence in 2045. Sandiaga called for an increase in budget support for research and enhanced collaboration between government, academia and the private sector – to create better synergy between them for more effective research outcomes and application.

Ma’ruf proposed the establishment of a National Research Agency with access to a research endowment fund. In an early critique Sandiaga said he was concerned about establishing any such agency as doing so tends to add more bureaucracy and costs. Ma’ruf replied that the notion was not to add new agencies but to consolidate those already active in field, without naming them.

The debate reflects the growing realisation in Indonesia that, historically, investment in research has been extremely low, and well below levels in comparable nations. While both candidates expressed great enthusiasm for closer connection between the research world and the private sector, there were no incentives announced, for example in the form of tax exemptions or deductions, for companies investing in research activities.

Sandi offered two additional initiatives on education. The first was to abolish the national final-year school exam system and replace it with a more decentralised system focused on the skills and competencies more present and relevant at each school. The second initiative focused on support for honorary teachers (who are paid very little). There are many such teachers, and they are not fully recognised or regulated and are thus paid very little. Proposing better support for them is a common populist refrain, expressed during many election campaigns.

Sandi outlined the need to raise the teachers’ incomes to secure their commitment to the professional while Ma’ruf noted the value of training to increase effectiveness. Neither, however, outlined any specific programs to raise the quality of teaching through, for example, mastering subject material, improving curriculum delivery or encouraging critical thinking.

In an approach he used on several other occasions during the debate, Ma’ruf promoted his campaign’s health program as an extension of the current Jokowi-Jusuf Kalla Government, rather than as a break with the past. He noted that a Jokowi-Ma’ruf government would maintain a focus on reducing stunting. He proudly peppered his presentation here and elsewhere with facts and figures on the public’s uptake of the national healthcare system. Sandiaga noted that should they win, the Prabowo-Sandi team would not only maintain the national healthcare system, but improve it. Here he noted some well publicised complaints about the system such as late payments to health workers, lack of access for patients and long waiting times. He also noted his campaign’s commitment to promoting the distribution of milk or comparable nutritional products to kindergarten and primary school children.

In response, Ma’ruf leapt into attack mode noting that the window to prevent stunting was really from before birth up until 2 years of age. After that, he said, it was too late. This was arguably the most substantive critique launched during the evening.

This section provided an opportunity to connect with earlier issues, both education and heath, with regard to enhancing productivity. Ma’ruf promised to revitalise vocational high schools, polytechnics and academies and also to better connect them with business and industry. He also proposed improvements to worker training centres (BLK), smoother linking with state-owned enterprises and promoting the idea of upscaling the workforce to meet industry needs.

Sandi said his campaign had committed to reducing unemployment by 2 million people. He also made frequent references to an old Suharto-era program ‘link and match’, in discussing alignment of the skills being taught with those needed in the workforce. This effort, he stated, should include providing incentives to the business sector, state and private, to increase their intake of apprentices. He also promoted the Oke Oce Program, championed by himself when he was vice-governor of Jakarta, as a part of his commitment to meeting the aspirations of millennials, who, he said, wanted more than anything to be economically independent. This Oke Oce program is now part of the Prabowo-Sandi campaign agenda.

The discussion here was by far the least impressive, with both candidates’ visions of culture sounding like folk laureate museum material. This deeply conservative valuation of culture reflects the vision that has dominated elite thinking since the New Order era. Ma’ruf proposed both preserving Indonesian culture to prevent cultural disorientation but to also be part of global cultural developments. Both candidates proposed connecting culture with tourism and other aspects of the economy and Ma’ruf here referenced BEKRAF, the Creative Economy Agency, as an example of this taking place.

One interesting aspect of the debate that may emerge as a future policy priority area was discussion of proper management and administration for the growing range of social welfare programs in Indonesia. There are more and more cards that people have to carry for these welfare programs these days. Sandi committed to streamlining the administration of various programs so that people would need only one card, namely their personal identity card (KTP). This suggestion was well received by the audience. However, it is one fraught with challenges related to administration, technology, privacy and integrity, as has been seen in attempts to create the national electronic identity card system.

The free questioning component of the debate opened with Sandi returning to a key theme of the Prabowo-Sandi campaign, namely economic autarchy tinged with xenophobia. He noted that unemployment remained high and implied that a large number of foreign workers were taking jobs from Indonesians, although offered no data to support this assertion. He also called for all foreigners working in Indonesia to be required to be able to speak Indonesian. Ma’ruf, in reply, quoted data indicating that foreign workers made up only 0.01 percent of the workforce, implying these concerns were overblown.

In the discussion on manpower issues no reference was made to the 9 million Indonesians working overseas, nor to the value of labour mobility or to the welfare of workers and its links to productivity.

Sandi’s closing remarks were well focused and identified specific programs and targets the Prabowo-Sandi campaign has been promoting. At the end he suddenly broke into Arabic as if to demonstrate his mastery of the sacred language in the presence of his opponent whose mastery is unquestioned. It is not quite clear why he did this as conservative Islamic groups, most analysts say, are already committed to the Prabowo-Sandi ticket. Up to the Arabic part, his concluding comments would have resonated well with communities from many cultural and religious backgrounds.

Ma’ruf concluded with general comments before noting the importance of combatting hoaxes which divide society, highlighting as an example reports that Jokowi plans to ban religious studies and the call to prayer. There were no rousing tones to enthuse the voters but rather a gentle reminder that he can be seen as a safe pair of hands to ensure that the faithful are secure with Jokowi as President.

Despite the huge age difference between the two candidates and the fact that Ma’ruf Amin has decades of legislative experience at provincial and national level, it would be fair to say that Sandiaga Uno went into the debate with higher expectations of performing well. Perhaps this was caused by his performance in the first debate where he was seen as a particularly engaging and eloquent participant, while Ma’ruf Amin rarely spoke. In many respects, this time around, Ma’ruf had the advantage of low expectations.

In several of his comments Ma’ruf made reference to a ‘10 year challenge’. I had to google this term assuming it was part of the Jokowi-Ma’ruf campaign program. It turns out I am millennially challenged as the term refers to a recent internet sensation of people uploading two photos of themselves, 10 years apart. For Ma’ruf this may have been part of an effort to connect with younger voters, as with his frequent references to aspects of the digital economy during the debate.

On several occasions Sandi deployed folksy vignettes to humanise discussion of policy that of course ultimately impacts on people. Both candidates made frequent use of Arabic terms and phrases – akin to English speakers peppering their speeches with French to present as sophisticated, Indonesian politicians often pepper their language with Arabic to present as religious. Both did so, more so Sandi.

Given that the Prabowo-Sandi team needs to raise their base vote to overtake what Jokowi achieved in 2014, it is clear that they need to secure some knockout wins from opportunities such as the debates. In many respects the core task of Ma’ruf for the Jokowi-Ma’ruf ticket is to demonstrate to voters that team Jokowi is not ani-Islamic. Many, without this assurance, may be swung towards team Prabowo-Sandi by appeals to primordial religious sentiment.

While Sandi presented with eloquence, competence and coherence, and Ma’ruf Amin was surely a better presenter than had been expected, it would be fair to conclude that this debate did not provide a huge boost to team Prabowo-Sandi. With one month to go before polling day, their window to close the gap between themselves and team Jokowi-Ma’ruf is steadily closing. At this stage the strategy of playing a straight bat is one could work for Jokowi-Ma’ruf. The Prabowo-Sandi team will need to start hitting a few sixes to catch up.

Next debate is on Saturday 30 March, with just the two presidential candidates on stage again.