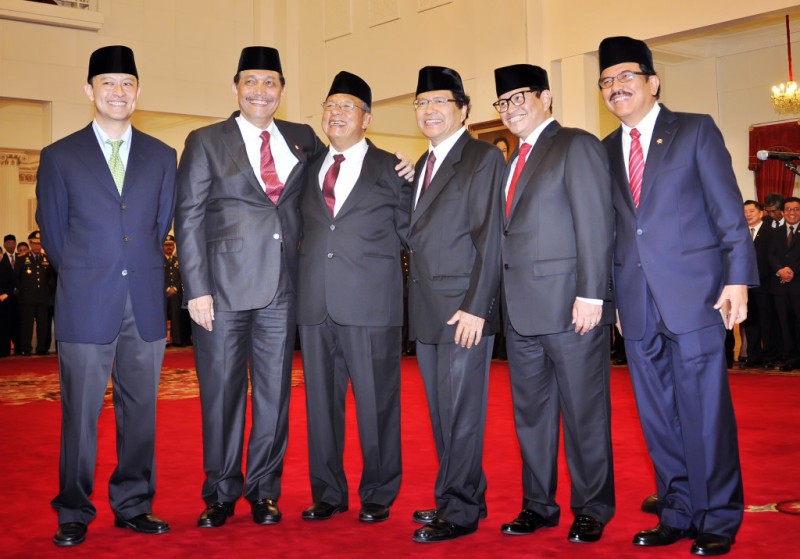 After months of speculation and political sand throwing within his own coalition, President Jokowi has made the first changes to his Working Cabinet (Kabinet Kerja). Given the heated criticisms and public attacks of the past few months, the actual changes have barely caused a ripple in either Jokowi’s minority coalition or the majority opposition.

Overall, the president went with age and bureaucratic experience, an obvious attempt to instill more discipline and analysis into policy formulation. In the first ten months of the administration poor planning and random bureaucratic actions led to numerous embarrassing headlines and rapid policy reversals on matters large and small including gas-pricing policy, food importation and luxury auto procurement for the ministers.

The reshuffle is a solid victory for the president in his struggle against the critics in his own party in that four of the five new faces are clearly beholden to him, not PDIP party chair, Megawati

Going into the reshuffle, the Mega camp had aggressively targeted Jokowi loyalist, Luhut Panjaitan, SOE Minister Rini Soemarno and Cabinet Secretary Andi Widjajanto for replacement. In the event, only Pramono was removed, while Luhut was given expanded responsibility and Rini remains in charge of the very important SOE portfolio.

The only clear win for the Mega faction is the placement of Widjajanto by Mega loyalist, Pramono Anung. Even here, however, Jokowi may benefit. Pramono comes over from parliament (DPR). He is a solid party professional worked his way up the PDIP ranks. His presence will facilitate communications not only with the DPR, but also between the president and Megawati.

Vice-president, Jusuf Kalla, also lost a little ground in the reshuffle with the shift of Sofyan Djalil from Economic Coordinator to the National Planning Board. Sudirman Said, however, kept his post as energy and mineral resources minister, assuring Kalla’s voice will still be heard in this important portfolio. The vice president is also doubtlessly pleased by Luhut’s move into a security post with no direct voice on economic policy where Kalla considered him a serious rival.

The Changes – Something old, something new

Trusted Jokowi advisor and presidential chief of staff Luhut Pandjaitan takes over the post of minister of security, legal and political affairs from Tedjo Edhy Purdijatno (Nasdem). Tedjo’s critical attacks on the Corruption Eradication Commission (KPK) during its bitter battle with the police earlier this year seriously damaged the president’s reformist credentials. His removal is a significant upgrade.

Former central bank governor (2010-2013) Darmin Nasution assumes the economic coordinating minister post from Sofjan Djalil. Sofjan has been moved over to the national development planning board Bappenas where he replaces Andrinof Chaniago. Bappenas is now considered a much less prestigious position, but the government is in desperate need of coordinated planning. Perhaps Sofjan can use his bureaucratic savvy and practical attitude to help the beleaguered institution regain some of the luster it had in the Soeharto era when no project made it into the budget without the Bappenas stamp of approval.

Rizal Ramli, former economics coordinating minister and briefly finance minister in the Abdurrahman Wahid (Gus Dur) government (1999-2001), becomes coordinating minister for maritime affairs, replacing the technocrat Indroyono Soesilo. Ramli is well-known for his strong nationalist views. The ministry of energy and mining is in his portfolio. This may not be good news for foreign investors in these troubled sectors.

Thomas Lembong is a fund manager and former VP at the Indonesian Bank Restructuring Agency (IBRA). While not from the PDIP leadership, Lembong has close ties to both the party and Jokowi. He replaces Rachmat Gobel at trade. Former deputy house speaker Pramono Anung (PDIP), meanwhile, will replace Andi Widjajanto as cabinet secretary.

The political message that can be derived from these changes is generally positive for the president inasmuch as they indicate he has been able to hold his ground vis a vis Megawati and the anti-Jokowi old lions surrounding her in his own party. He has also been able to resist pressures from other members of his coalition.

While Mega and the PDIP brass got what they wanted with the ouster of cabinet secretary Andi Widjajanto, Andi was increasingly seen as a barrier to Jokowi’s ties with the party elite. And he simply made too many mistakes. His embarrassing missteps included incorrectly incorporating the assertion the government still had debts to the IMF in a Jokowi keynote speech and not catching an error in the text of another major speech, with the result that Jokowi said Soekarno was born in Blitar instead of Surabaya – an unforgiveable show of ignorance in the eyes of many PDIP hardliners just waiting for Jokowi to slip. He will not be missed.

His replacement, Pramono Anung, is a seasoned politician who is unlikely to make these kinds of mistakes and should help improve Jokowi’s often-troubled ties with his party and parliament.

It is also worth noting that Mega attended the installment of these new ministers at the presidential palace. She was so angry about the composition of the initial Jokowi cabinet last October that she refused to attend their inauguration ceremony. This is another sign of easing tensions within the troubled party.

The economic message, on the other hand, is disappointing. The track records of the replacements give no indication that there will be any policy changes that might bolster the struggling economy. The reshuffle essentially confirms the government’s inward looking direction and signals the president is doubling down on the very inward looking economic policies that have caused the current downturn.

Darmin’s appointment is a mixed blessing. He is definitely a man of integrity. As a former tax director general he is known as a tough, disciplined manager, qualities in short supply in the Jokowi government to date. He has never, however, shown the breadth of economic policy understanding expected of a coordinating minister. His tenure as Bank Indonesia Governor saw significant restrictions on new investment in that badly underfunded sector. Many also saw him as being too accommodative to political lobbying while at the central bank. He will be little help to beleaguered finance minister Bambang Brodjonegoro.

Rizal Ramli is the most outspoken economic nationalist among the new appointees. He is also a person of integrity, but his views on foreign investment and state control over the economy echo the narrow statist views of the economically disastrous Soekarno era that increasingly appear to be the anchor of the president’s economic strategy.

Rizal’s position as coordinating minister for maritime affairs may not seem directly related to broader economic policy, but the energy and mining ministry, a magnet for nationalist sentiment and rent seeking, is in his portfolio and ports and harbors are major targets for infrastructure spending.

Perhaps the most positive aspect of this appointment, as with Nasution’s, is his outspoken bluntness and tough management style. He is a savvy old hand who knows the bureaucracy and is willing to ruffle feathers to get the job done.

At trade, Lembong is the only new member with a remotely international outlook is Lembong in the trade ministry where he is a significant upgrade.

The biggest challenge Lembong will face is the strong anti-import sentiment within the body politic and the demand of many of Indonesia’s outmoded, uncompetitive industries that cheaper, better imports be banned, saddling consumers and better-managed companies with high costs and shoddy goods. He may not have the experience and gravitas necessary to reverse Indonesia’s increasingly autarkic trade policies.

The reshuffle shows the president’s growing political strength. This is very important for overall stability given his coalition is still a minority in parliament.

Unfortunately, however, the changes do not indicate the government has any strategies to reverse five years of slowing growth or to better prepare the economy to face the twin challenges of China’s slowdown and the inevitable tightening of the US economy.

Many say that in Indonesia, bad times make good policy. Unfortunately, we will soon find out whether or not this is still true.

James Castle is the Chairman of CastleAsia and a member of the AIC’s Board. The views expressed are his own.