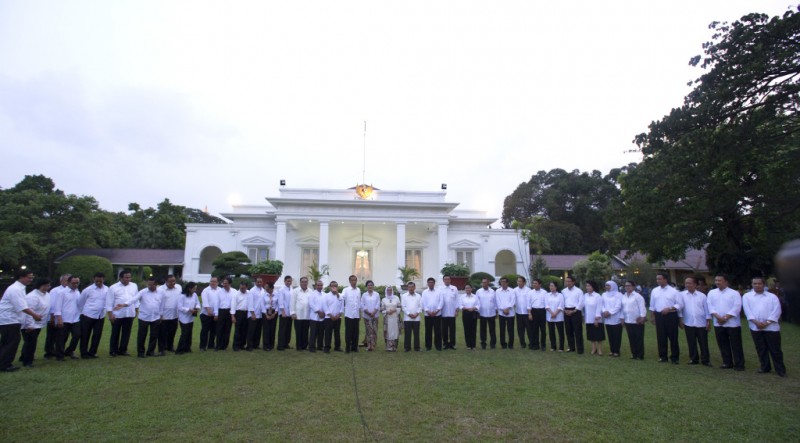 Ministers in the newly-announced Indonesian cabinet will face not only the challenge of managing their portfolios; they will also have to face Indonesian civil society and media which are now highly empowered and have found many channels to voice their opinions and demands.

Here, you will be able to read a selection of what people are saying about the new cabinet from traditional and social media. We will update this page throughout the day to keep you updated.

The Jakarta Globe has published the list of ministers with short profiles, which is a good first article to read:

Indonesia’s New Ministers: Who Are They?

And @selasarcom did a nice mapping (in Indonesian) of the cabinet:

There is already a level of disappointment with what some see as political compromises.

Meanwhile, Professor Ed Aspinall says that Jokowi has gone for ‘realpolitik over reform’, although he has still some hope.

Overall, this is a cabinet that continues rather than breaks with Indonesia’s emerging political traditions. To be sure, it is possible that some of the ministers will emerge as strong reformers. But at first glance, this cabinet is far from being the fresh start that Jokowi promised.

Aaron Connelly from the Lowy institute offers a subtle perspective on the issue of compromise, saying that ‘there are signs both of principle and compromise’

Jokowi is spreading the patronage around among his coalition, giving the Ministry of State-Owned Enterprises to former trade and industry minister Rini Soemarno, a Megawati confidante; the Ministry of Agriculture went to a young businessman and acolyte of Vice President Jusuf Kalla. On the other hand, the Ministry of Energy and Natural Resources, the wettest of them all, went to a former state oil company official who was reportedly forced out in retaliation for his efforts to clean it up.  There are signs both of principle and compromise.

With President Joko Widodo’s promise that it is now time to ‘work, work and work’, he has aptly named the new cabinet ‘Kabinet Kerja’ (‘Working Cabinet’). On Twitter, the influential film director Joko Anwar’s simple tweet below has been retweeted more than 400 times:

One minister who went straight to work was the Communications and Information Technology Minister, Rudiantara, who sent out his first ever tweet this morning (translation below)

“Good morning, this is my first tweet. I’m asking for your support in carrying this mandate for nation and country as the minister for Communications and Information Technology”

AIC Director Paul Ramadge says that the appointment of two education ministers is an important step to open up further opportunities for collaborations between Indonesian and Australian researchers.

The recognition of the importance of research, technology and higher education is exciting, and reinforces the AIC’s efforts to introduce much higher levels of collaborative research between leading academics in both nations. We are looking forward to working closely with the Minister of Research and Technology and Higher Education, Professor Dr Pak M. Nasir.

President Widodo showed his appreciation of academic leadership, including creating a new post specifically for Higher Education and appointing academic leaders, including some from Australia-Indonesia Centre’s partner institutions.

Anies Baswedan, the country’s youngest rector (of Paramadina University) was, as expected, appointed as the Minister of Primary and Secondary Education. He founded Indonesia Mengajar, a foundation that sends young Indonesians to teach in remote areas, and followed the footsteps of his grandfather, Abdurrahman Baswedan, who was a Deputy Minister for Information under Indonesia’s first president, Soekarno.

In a widely praised move, Joko Widodo has appointed eight female ministers -the highest number ever. This includes the appointment of the first female foreign minister in Indonesia, career diplomat Retno Marsudi, whom Michael Bachelard from The Age says was ‘a surprise choice over some more highly fancied rivals’. (Although Aaron Connelly says that the appointment was a ‘fairly orthodox selection‘.

If Professor Yohana has an impressive academic background, another female appointee,  Susi Pudjiastuti left school when she was in her second year of Senior High School to start her own business. Since then, she has become one of the most successful business leaders in Indonesia (in aviation and fisheries), and will play an important role in Jokowi’s maritime focus as the Maritime and Fisheries Minister.

The new Foreign Minister, Retno Marsudi, knows Australia well: her first overseas posting was as the information secretary in Canberra between 1990 and 1994. But her introduction to Australia was not easy: in 1991, there were furious demonstrations by Australian unions and civil society after the death of protesters at the Santa Cruz cemetery in East Timor. During this time, she said her car ‘had been dented…and doused in milk when she was shopping’.

As Amitav Acharya recently wrote in New Mandala, there are ‘growing challenges to Indonesia’s foreign policy and international role’.

Jokowi has already shown that he has a clear interest and priority in foreign policy issues. He has made it known that he intends to focus on maritime issues, by both advancing Indonesia’s naval modernization (already started under SBY) and playing the role of mediator in the South China Sea conflict. But much depends on Jakarta’s ability to secure a code of conduct on the South China Sea, which is by no means assured.

And he also writes that ‘Jokowi is likely to continue with Indonesia’s strong engagement with ASEAN, but some of his foreign policy advisors want Indonesia to look beyond ASEAN’.