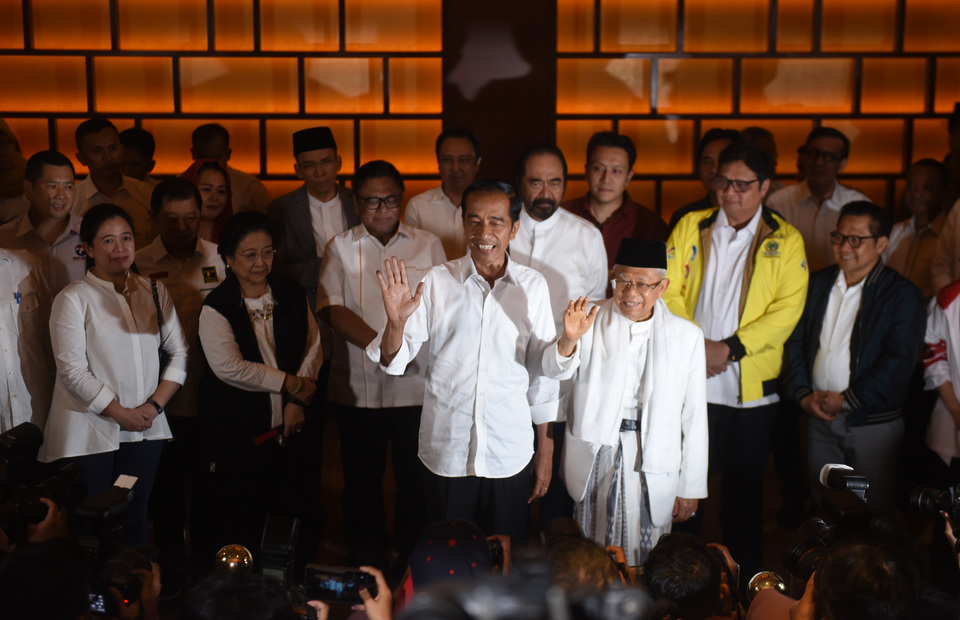 The first point of note is that all of the respected polls indicate that the President has been returned with a slight increase in support. Across the regions, results vary. Across Sumatra, especially in the plantation provinces of South Sumatra, Riau and Jambi, the President lost considerable support. Sumatra has again been the key regional base of support for Prabowo.

The western part of Java showed little change from 2014 with Mr Prabowo again enjoying a comfortable win, although it does seem that Jokowi managed to retain a modest majority in Jakarta. Across the central and eastern two thirds of the island it is a different story with the President picking up significant positive swings. His re-election was won here in the Javanese heartland.

In Kalimantan there was a slight increase in support for Prabowo. In Sulawesi, the loss of Jusuf Kalla from the Jokowi ticket has had a big impact with Prabowo taking victory in the southern half of the island. In many respects Jokowi’s victory here was an anomaly in 2014, brought about specifically because of the inclusion of leading South Sulawesi figure Jusuf Kalla on his presidential ticket. Meanwhile appeals by Prabowo that his mother was a Christian from North Sulawesi did nothing to stop a major swing to Jokowi in that province.

Finally, from Bali to Timor and in the Moluccas and Papua, where approximately 60 per cent of the population are non-Muslim, Jokowi enjoyed a significant positive boost in support.

The elections demonstrate again that Indonesia is and remains the most advanced and secure democracy in Southeast Asia and in the Muslim world more generally. These results, especially for the presidential election, indicate that Indonesian voters have again turned their backs on the growing appeal in so many democracies to the tough guy leader with their common appeals to nativist chauvinism, isolationism and/or resolute uncompromising national leadership to save the country. The past two presidential elections in Indonesia have both offered such a leader. On both occasions Indonesians have politely said thanks but we’ll take the other guy.

Part of the reason for this, and I admit very speculatively, is that Indonesians are by-and-large very optimistic. Many regional comparative surveys and studies, such as the one conducted by the AIC, indicate that Indonesia are almost wildly positive and optimistic. Attempts to convince the citizenry they are facing some kind of ‘American carnage’, as used by the incumbent US President, just does not find fertile ground in Indonesia from which to fashion an electorally winning campaign as seen in other countries.

Identifying the winners and losers of the parliamentary elections is more complex than the two-horse race of the presidency. Quick count results too are less uniform than those of the presidential race. Even so a few points of commonality can be seen.

Polls indicate that PDIP, the President’s party, will retain its position as the largest party in Parliament. It appears to have secured a modest boost in support. The tussle for 2nd and 3rd place is between Gerindra, Prabowo’s party, and Golkar. The results, however, indicate an improvement in vote for Gerindra and a loss of support for Golkar.

Of particular note is that the much vaunted ‘coat tails’ effect of combining presidential and legislative elections (which presumes great benefits for parties that put forward a presidential aspirant) simply did not materialise. Almost two thirds of voters have chosen a party outside PDIP (Jokowi’s party) and Gerindra (Prabowo’s party) for their legislative candidate.

Among other mid-level parties, almost every party with seats in the current DPR has passed the four per cent threshold to enter the new Parliament. The only exception is Hanura, led by outgoing DPD Speaker, Senator Oesman Sapta, which has lost 75 per cent of its support base.

PKB has enjoyed a modest boost in vote, perhaps reflecting the close support by its leaders for Jokowi and its more upfront opposition to the strident and globalist forms of puritan Islam that have been on display in Indonesia in recent years. The NasDem Party, led by media tycoon Surya Paloh, has made some positive gains. The Islamist PKS may have secured its best result yet.

The Democratic Party, the party of former President Yudhoyono, appears to have suffered some further loss of support as has PAN, the party affiliated loosely with the second major Muslim group in the country, Muhammadiyah. Finally, the old Islamist party, PPP, appears to have survived a near death experience by just passing the four per cent threshold.

None of the four new parties reached the four per cent threshold. Among these include Perindo, the party led by media tycoon Hary Tanoesoedibjo. He has failed to translate free airtime on his TV stations into votes. Berkarya, led by Tommy Soeharto, the youngest son of former President Soeharto, has again demonstrated that Indonesians, while often as nostalgic for the ‘good ‘ol days’ as people elsewhere, do not vote that way. His party secured the same percentage of votes as the party established by his older sister Tutut when she competed in the 2004 elections.

The only new party worthy of close attention is the Indonesian Solidarity Party, PSI, which, while failing to pass the four per cent threshold, has clearly established a significant beachhead among first-time and other young voters and most importantly among voters in Jakarta.

It is important to note here that, historically, political parties which have gone on to become important players have all demonstrated an above-average level of support in Jakarta in the first election they took part in. Examples include PDIP, PAN, PKS, Demokrat and Gerindra.

PSI, it appears may have secured up to eight per cent of the vote across Jakarta. This is way above the two per cent it appears to have secured across the nation suggesting this is a party to watch into the future.

In many respects, the second term of President SBY was affected significantly by the fall-out from corruption concerns around the government’s bail-out of a failed bank during the GFC. This seemed to haunt the second SBY administration into greater caution than would be expected. In contrast, President Jokowi has declared on numerous occasions during the campaign that he carries no baggage.

One of the perhaps ironic dynamics that he will enjoy is that his own party will not be as dominant in the likely governing coalition as had been projected. This will encourage, indeed enable, him to work with a number of parties on particular issues of interest. This may also include parties from ‘across the aisle’.

In addition, while he is not reckless, President Jokowi is certainly not as excessively cautious as was President SBY in his approach to governing. Given that he has set front and centre of his campaign a desire to focus on education and training over the next five years, I would expect him to do just so with the same single minded determination that he showed in forcing the pace on infrastructure development over the past five years.

It was widely speculated that a key value-add of including Ma’ruf Amin was to boost support for the Jokowi ticket in western Java. Initial results suggest this has not actually taken place. In many respects, the stronger results for PKB (with its core electoral support base in the central and eastern two-thirds of Java), the key party supported by Nahdlatul Ulama, suggests the President may lean more towards them for support on key issues related to the politics of Islam.

In some important respects, the huge ‘Islamist’ demonstrations over the past couple of years have as much to do with a contest for the hearts and minds of Indonesian Muslims as it does for the Indonesian state. Pitted against one another are a purified vision of Islamic life and solidarity, liberated from the bounds of particular nation states, versus an authentically Indonesian vision of Islam.

While these competing visions do cut across traditional divides among Indonesian Muslims, it would be fair to state that Nahdlatul Ulama (NU), especially over the past two generations, has been a prosecutor of this second vision. Key to this vision is the acceptance of the inherent pluralism of Indonesian society and a recognition that denying or suppressing this pluralism represents an existential threat to the social fabric, cohesion and unity of the nation.

The re-election of Jokowi suggests a greater voice for this kind of respect for pluralism within the country may be found in policy making circles, as reflected by his huge wins in the NU heartlands across of central and eastern Java together with his huge victories in the non-Muslim regions of the country.

The President and his Government have been quite unsure about ways to respond intellectually and ideologically to this challenge to social cohesion over the past couple of years, other than by compromising and accommodation. Attempts at legal harassment of opponents harks too much back to the pre-democratic era and suggests an aura of a government that is fearful rather than confidence in managing these challenges.

The greater intellectual, philosophical and theological gravitas offered by NU and various minorities – that now represent key bases of support – suggest a pathway to reinvigoration and a more confident projection of authority by the national leadership.

During the long process of vote tabulation both campaigns will claim victory. The Prabowo camp has declared a victory by an even greater margin that they argued in 2014. Jokowi, while noting the results of the quick counts look positive, has indicated a need to await the official results.

Several members of the Prabowo team have already indicated they will begin a street campaign to prosecute their claims to victory – much as they did in 2014. They will seek to use the ‘212’ coalition as the basis for mobilisation. Problematic for them is that, unlike in 2014, there is no key media group that is expected to favour their cause, leaving them isolated and relying only on the echo chambers of their social media networks to rally for the cause.

Official results will be announced on May 22nd. I would be most surprised if the losing candidate does not lodge an appeal to the Constitutional Court and equally surprised if the Constitutional Court upheld such an appeal. Once the appeals have been heard and adjudicated the country will wait until 1 October when the new Parliament is convened and speakership is elected a few days later.

On 20 October the duly elected president and vice-president will be sworn into office and the new cabinet announced the week after.