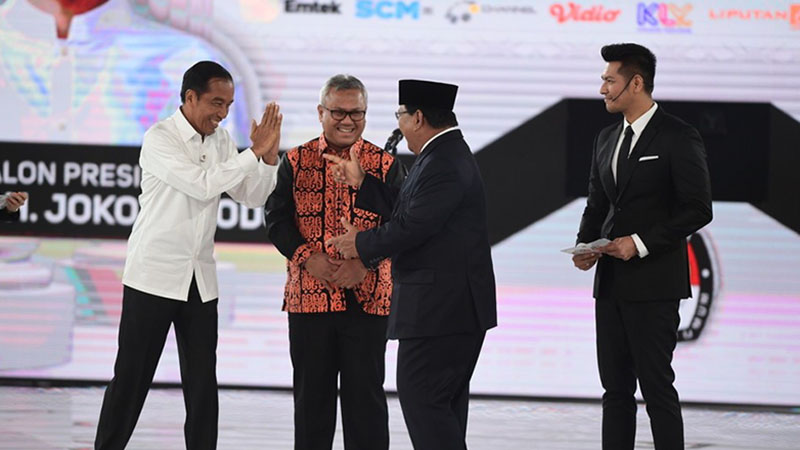 The themes for this fourth and second-last debate were national ideology, governance, defence and security, and foreign policy. The debate, on 30 March, featured only the two presidential candidates.

Candidates were asked how they would affirm the national philosophy of Pancasila without resorting to indoctrination.*

Prabowo began by noting that Pancasila was the ‘compromise’ struck at the founding of the nation by national leaders. The use of the word compromise (kompromi – this has a slightly negative connotation) is more in line with the language of the Islamists who have always argued that they were somehow outmanoeuvred, undermined or even cheated at the end of the negotiations on the 1945 Constitution. The egalitarian nature of Pancasila has always been at odds with the Islamist view that Islam and its followers should be accorded a special place in the nation and the state.

Prabowo’s use of kompromi may have been accidental, but was notable against Jokowi’s use of the term agreement (kesepakatan) to describe Pancasila. Throughout the rest of the discussion both referred more to kesepakatan. Both also argued that Pancasila needed to be taught throughout each citizen’s education – Prabowo in a flourish arguing from kindergarten to postgraduate level, to which Jokowi, facetiously, suggested reaching further down to play group too.

Prabowo added little more than the need for an education approach. Jokowi noted that the values of Pancasila should be applied by all, especially leaders, in demonstrating pluralism and tolerance. Prabowo used this as an opening to discuss hoaxes and other forms of intolerance against himself, such as news claiming that he was a supporter of a caliphate. He began to plead that this was impossible given that his mother was a Christian from North Sulawesi. Jokowi responded that he too was a frequent victim of hoaxes – such as suggestions he was with the long banned Communist Party of Indonesia – but concluded by saying such critiques were normal and not worth complaining about.

In the end, considering that the nature and vision of the Indonesian nation is such a contested area, debate on this issue was surprisingly light weight and uninspiring.

Candidates were asked for their views on Industry 4.0 and their visions for implementing e-government and smart cities.

Jokowi demonstrated a comfort and familiarity with contemporary governance systems and technologies and identified how his government was using them. He also noted that his government was slashing the number of superfluous agencies and institutions in order to enhance efficiency. Jokowi argued that what Indonesia needed in this era was ‘dilan’ – an acronym of ‘digital’ and ‘melayani’ (to serve). The acronym also recalls the lead character of a recent Indonesian film, Dilan 1990 (2018). The use of such a popular character also served to demonstrate Jokowi’s ability to connect with millennials.

Prabowo offered a different view, noting that all the new technologies have their place, but that unless there was a clear vision of which communities were to benefit from their application, little would be gained. It was a strong point he had raised on a couple of other occasions. Indeed, he observed at one point that it was better to retain the use of existing systems and technologies in the absence of clarity on the proposed beneficiaries of new technologies. He also affirmed on several occasions that the core problem in the delivery of government services was corruption and that a strong state was needed to deal with it. In a well-placed dig at a recent corruption scandal involved a political ally of the President, Prabowo mentioned on a few occasions that buying and selling of jobs was a big problem across the government sector.

Prabowo opened by observing that the wealth of a nation cannot be protected if its military is weak. He quoted in English the ancient Greek proverb, ‘The strong do what they will; the weak suffer what they must,’ suggesting that the country’s defence and security decisions today will decide which of these fates lies ahead. He observed that Indonesia’s military was weak, receiving just a small portion of the national budget and a very small proportion of GDP. He said foreigners were laughing at Indonesia.

Jokowi noted that the country was now transferring defence efforts away from Java and focusing on national boundaries, including positioning radar technology to ensure full command of the frontier regions, together with air force and naval facilities. He noted that the defence budget was the second largest after public works, at about AUD 10 billion.

Prabowo contrasted Indonesia’s defence budget (around 5 percent of national budget) with Singapore’s (around 30 percent), and noted further that the country was being weakened by an exodus of capital. He suggested that the President was not being honesty briefed and was thus not in command of the real situation.

Jokowi replied that Prabowo did not seem to have much faith in the military. He explained that he was well aware of developments, having visited the frontier operations himself. The government, he noted, did not see the defence budget as a cost but rather as an investment connected to wider capability development such as armament development and manufacturing.

To the question of Indonesia’s greatest diplomatic strength and strategy, Jokowi noted that as the largest Muslim majority nation, the country was very well-placed to play a leading role. He noted a number of hot spots where Indonesia had been able to play a role. He also noted the progress of finalising a number of trade agreements.

Prabowo noted here, and later as well, that being an international ‘nice guy’ was okay, but did not mean that the country was respected or taken seriously. Diplomacy, he declared, had to be backed up by strength and power.

Jokowi responded that the country was able to protect its people, and make trade agreements to advance its interests. He noted in particular the comprehensive economic partnership agreement (CEPA) with Australia that will help Indonesian business enter the Australian market more competitively.

Prabowo noted that a country must defend its core interests. Referring back to the notion that Indonesia was weak, he asked rhetorically whether anyone really believed that the country could defend itself should some foreign armada enter its waters.

Jokowi said yes, the country could defend itself, and that his advisers had indicated that there was no military challenge expected. As the nation’s economy expanded further, he continued, so too would its ability to strengthen its military power and capability, noting that the country was on track to be on par with regional powers in 20 years. Prabowo replied that he recalled being told in the mid-1970s by his seniors in the military that in 20 years Indonesia would catch up and that there would be no wars in the region. Then came East Timor. He reiterated that the President was being briefed by people who just wanted to say nice things, not communicate the reality, and added that it could not be assumed that there would be no military challenge.

Jokowi noted that there were only projections around regional power and stability, not declarations, and that the country was also developing capacity in cyber security and modern armaments. He acknowledged Prabowo’s point about raising the defence budget but observed there were many competing priorities. The past five years, he explained, had been focused on infrastructure while the next five would be focused on developing human resources.

A this point, Prabowo raised the spectre of selling ports and airports to foreigners. Jokowi observed wryly that it seemed Prabowo was very scared of foreign countries. He explained investment was welcome but that he would not give an inch of sovereignty, noting the recent acquisition of majority shares in the Freeport gold mine in Papua. Prabowo noted that Freeport had done very well from the deal with the Indonesian Government, again suggesting the President was being poorly briefed by his officials.

In response to a question from Jokowi on the conflict in Rakhine State, Prabowo appeared to stumble, seeking confirmation that this referred to the Rakhine State in Myanmar.

The issue is important as the government is accused by the conservative Islamist lobbies of being weak on confronting Myanmar on the issue.

Prabowo noted that the Myanmar situation was concerning and that ASEAN policy of non-interference in each nation’s internal affairs had to be balanced against UN reports that the Rohingya were the victims of genocide or ethnic cleansing. In reply, Jokowi noted that the UN had asked Indonesia directly to support efforts to secure peace. He shared that he had visited the camps in Bangladesh, referring to the residents there as a fellow Muslim community, and said that everyone had to all work hard to support them.

Both candidates essentially forewent their concluding statements, simply making conciliatory remarks about each other and appealing for unity. For Prabowo in particular this time could have been used to make a solid and strong finish.

This debate did shine some clarity on campaign approaches.

A key element of the Prabowo campaign has been raising Trump-esque concerns about threats to the nation, be this the loss of sovereign control over national assets or the inability of the nation’s defence to preserve territorial integrity or, again, the threat of foreigners laughing at you. This armageddon narrative contrasts with the positive message that Jokowi and even Prabowo’s running mate, Sandiaga Uno, have been presenting.

In response to this nativist agenda, Jokowi’s has deployed politely sarcastic comments such as “Mr Prabowo seems to have no faith in the military”. This often works to dull the sting in Prabowo’s arguments, forcing him to pull back. Furthermore, Indonesians have a well-known tendency to be positive and this may be making it more difficult for Prabowo to gain the kind of campaign energy that he has been able to mobilise in earlier elections.

Jokowi presented as relaxed, perhaps even bored, at some points during the debate. He focused on presenting a positive campaign using data and performance. His promotion of ‘Islamic diplomacy’ appears to be part of a wider effort by his campaign to burnish Islamic credentials at every opportunity. For the most progressive voters in the electorate this has led to some disengagement with his campaign and threatens to lower rates of participation on polling day.

For Prabowo there is clearly a need to cut through and expand his voting base. This debate did not achieve this.

The effusive appeals for, and demonstrations of, unity between the two candidates at the end of the debate was also interesting, as was the fact that both decided to blow an opportunity for a strong final statement.

The fifth and final debate, with all four candidates on stage, will be on Saturday 13 April.

* (Background to Pancasila question) There has been a growing ‘born-again’ Islamic identity seen over the past three decades in Indonesia, in which religious identity and solidarity is elevated above national identity or perhaps, more accurately, seeks to blur the issue by presuming both identities to be the same. This has undermined a pre-existing pluralist national identity as reflected in the national philosophy of Pancasila.

During the Soeharto era, however, Pancasila was ‘force fed’ to the public through a doctrinaire approach that discouraged free thinking and interpretation. As a result, the end of the Soeharto era saw Pancasila effectively sidelined beyond lip service statements of support. In recent years it has begun to be resurrected as a bulwark against this creeping sectarianism. Contemporary promoters of Pancasila, however, do not want to see a return to indoctrination as the method for promoting the pluralist values that underscore Pancasila.