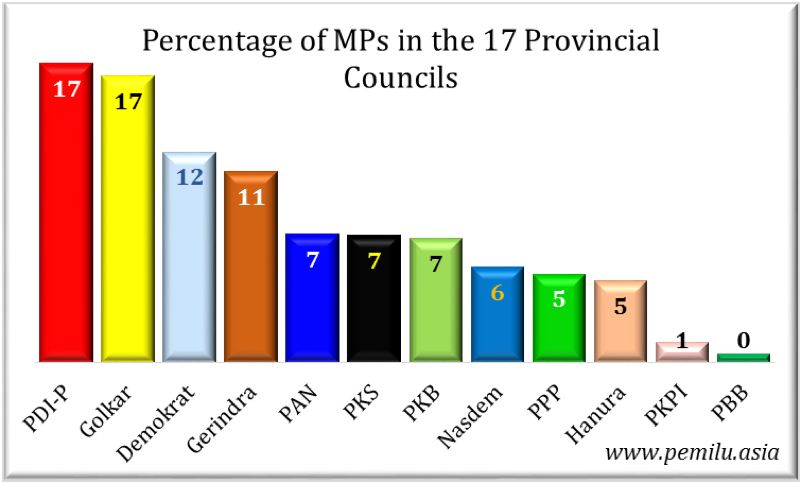 Voters in half of Indonesia’s 34 provinces, including the 4 largest provinces, as well as nearly 25% of cities and counties, went to the polls last week to elect their leaders.

Indonesia’s multiplicity of Indonesian parties and its rich tapestry of political splits and schisms make it difficult to extrapolate results to the national level. At the same time, the old proverb that all politics are local springs to mind. While final results are still being tabulated, the outcomes in most places are now reasonably clear.

With these caveats in mind there are a number of interesting pattern of results to emerge. Perhaps the most notable one is that attempts by 7 deputy governors to take over from their governor partners (who had already served their maximum 2 terms) all failed to win.

It was not a good result for incumbents in general with 5 of the 7 who contested the elections failing to be re-elected.

The most notable successful incumbent victory was in Central Java, where Governor Ganjar Pranowo was facing the Sword of Damocles over a possible corruption case from his days as an MP. When he was cleared of suspicions, his victory over former minister and long-time anti-corruption champion Sudirman Said was much more assured.

In Southeast Sulawesi, a former Governor from 10 years ago Ali Mazi was able to emerge victorious when a previous front runner was caught red handed in a KPK anti-corruption sting operation.

At the other end, mayors of cities or counties enjoyed greater success with some 7 moving up to lead the province in which their city or county is to be found.

Another group that failed badly were the sons, daughters, and siblings of ex-leaders who were seeking to take up the job of their senior relatives. At least 4 who tried failed while none succeeded.

Examples of these failures to succeed were found in South Sumatra (which with Jakarta is set to host the Asian Games next month), East Kalimantan and South Sulawesi.

The case of West Kalimantan was of particular interest where the daughter of outgoing Governor, who had won the highest ever number of personal votes in Indonesian history in her re-election to the DPR in 2014, failed to translate that support into victory.

Without any doubt the most stunning of all results was not at the provincial level. Rather it was the election for Mayor of the important City of Makassar, the anointed gateway to Eastern Indonesia.

It should be a salutary reminder to political leaders not to take the voters for granted. At the same time it is noteworthy that in addition to Makassar, voters in approximately 10% of other districts also only had a single candidate to accept or reject.

Voters in Sulawesi tend to be less accepting of being offered single candidates than those in other parts of the country. The most concentrated number of single candidate elections (3 out of the 4 elections conducted) was in Banten, the province neighbouring Jakarta to its west.

While it is possible for candidates to emerge without support from the parties, the vast majority of candidates are supported by parties.

This table indicates the percentage of MPs from each party across the 17 provinces in which elections for governor took place.

Meanwhile, the table below indicates how many times each of the parties that participated in the last elections (and thus were able to put forward candidates in these elections) were part of the winning team in elections for Governor.

Among the more interesting points to note is that the parties with less overall numbers of MPs have been more successful in joining winning coalitions for the governorships. Relative political newcomer, the National Democrat Party (NasDem), has been most successful being part of 10 of 17 winning coalitions.

A post-election article by Dr Philips Vermonte, Executive Director of CSIS in Jakarta, suggests that smaller parties have more flexibility in selecting coalitions while larger parties are almost duty bound by size to have to field one of their own candidates regardless of prospect of victory. The case of PDIP compelling itself to field its own candidate in West Java, despite foreseeably low prospects of victory, is a case in point.

While many partisan pundits may try to spin the results as good for their side or poor for other parties, the results, certainly at the provincial level, as demonstrating that voters are keen to endorse candidate seen as good performers at the local level and then take a chance on them for the provincial level.

In many respects, these are the kind of candidates that match well the background rise to power of the incumbent president.

Kevin Evans is the Indonesia Director of The Australia-Indonesia Centre.