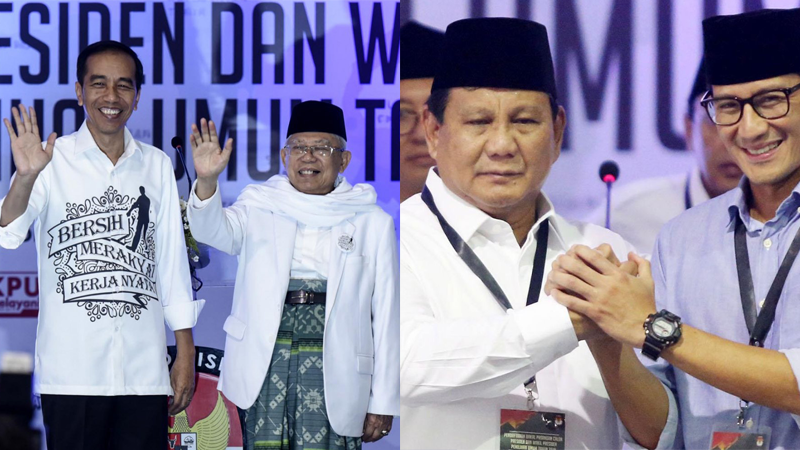 The Path To The Presidency

To win the election, a Presidential/Vice-presidential team must secure over 50% of the popular vote. If no candidate secures 50% of the vote in the first round then the top two candidate pairs face off in a second round.

The path to winning the election, however, consists of several stages. The process begins with nomination. While Indonesia today, like the USA, operates a presidential system of government, the DNA from the country’s various old parliamentary systems is often close to the surface. For example, candidacy is determined by demonstrating support from parties in the House of Representatives (DPR). A candidate team needs to show they have the support of parties commanding at least 20% of seats in the current DPR or 25% of the votes their parties secured in the last election.

Given that there are no large parties in the current Parliament (the largest party commands less than 20% of the seats and votes), candidate teams invariably form coalitions of support. Coalitions in Indonesia are much more fluid than in Australia as their prime functions are to ensure a party’s preferred presidential/ vice-presidential candidate is able to pass the nomination threshold and then later to participate in post-election cabinets should their candidate be successful.

In terms of ideological coherence, coalitions tend to be formed in order to reach out across Indonesia’s key political cleavages. This often includes efforts to bridge ethnic and regional/geographic divisions. Most significantly it includes a need to reach out to those who see the nation’s most populous religion, Islam, as central to their political thinking and yet also to ensure that concerns of minorities, as well as Muslims who reject appeals to sectarian solidarity are considered. Differences in economic policy do not tend to divide voters or parties. Most campaign teams tend to promote a welfarist approach with autarkist appeals to economic self-sufficiency and declarations to streamline the bureaucracy and reduce corruption.

Nominations closed on 10 August. In the weeks leading up to this deadline party leaders, spokespeople and would-be candidates engaged in a frenetic pace of meetings, counter meetings, balloon floating and popping with the media full of chat shows and panels, general reporting and lots of speculation on permutations of possible candidate pairings. On the final day of nomination, two pairs of candidates came forward. These comprised:

Collectively this coalition represents 60% of seats in the Parliament and 62% of all votes from the last elections.

Facing off against this coalition is Lt Gen (ret) Prabowo Subianto, who ran and lost to Pres. Jokowi in 2014. He also has a new vice-presidential running mate, Mr Sandiaga Solehuddin Uno, the current Deputy Governor of Jakarta and a high profile young entrepreneur prior to entering politics. This coalition is supported by Mr Prabowo’s party (Gerindra).

Collectively this coalition represents 40% of seats and 36% of all votes from the last elections.

Beyond these parties there are two other parties that have not been included in either coalition namely PBB and Garuda.

Setting aside the new parties, the main changes between the two pairs of coalitions that competed in 2014 and 2019 is that Golkar and PPP have switched from supporting the Prabowo candidacy in 2014 to supporting the Jokowi candidacy in 2019. The following chart outlines the breakdown of support for various presidential coalitions since the first such elections in 2004.

Looking at the relative strengths of the candidacies it may be tempting to conclude that the incumbent should enjoy a relatively easy win. This would be unwise. First voters are perfectly happy to “split” their votes. Many “old hands” have failed to get elected because they presumed creating a huge coalition of party support would guarantee a victory. Indeed in the presidential elections of 2014, it was Mr Prabowo’s coalition that enjoyed a majority of votes (especially considering the “neutral” party ultimately aligned with his coalition) from the just concluded parliamentary elections. In other examples Mr Jokowi won the governorship of Jakarta in 2012 with only 20% support in that region’s most recently concluded parliamentary elections. In June this year the Governor, who won the election in the important province of South Sulawesi, won 44% of the popular vote although only has 27% support in the provincial council. Most telling was the election results for mayor in the capital of South Sulawesi. In that election there was only one candidate and he enjoyed the support of 10 of the 11 parties in the council. Despite that a majority of voters chose to reject this candidate.