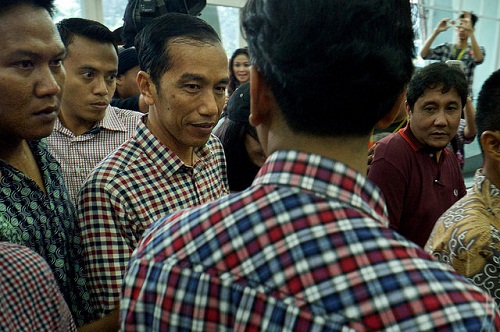 That Jokowi is a good man is not in dispute.  Even his rival Prabowo does not contest this point.  The question is whether Jokowi will be a good president.

As it was with his predecessor this turns on two axis: his personal capacity for top-level leadership and the composition of his cabinet team.  The first doesn’t only shape the second; it also shapes the dynamics of real-politik and coalition formation.

One month out from the inauguration of the Jokowi government we still have no clear details of the new president’s ministerial line-up or even of the broad parameters of the ministerial structure.  This is frustrating but it is to be expected. The deal-making and rebalancing will continue until the clock runs-out. As a result we will only begin to have a clear sense of what sort of president Jokowi will be, in terms of his team, after October 20.

Even so, we already have some clear indications of what style of leader Jokowi will be.  His approach to the presidential campaign tells us much about his character and capacity. The definitive analysis will be years in the making but five points already stand out.

First, it is clear that Jokowi is not a typical professional politician.  Not only does he come from outside of the Jakarta elite and from the generation of politicians who were a product of the New Order – his political career began in Solo after the fall of Suharto – but his approach to politics is unconventional. This is good and bad.

For example, his presidential campaign very nearly failed despite his initial popularity and the considerable baggage that his rival was carrying.  Civil society activism can be a source of refreshing change and dynamism but it can also bring with it a myopic and naive approach to practical politics that missteps tactically and falls down strategically. To maintain the social capital that it needs for a long program of complex reforms, Jokowi’s government must avoid the mistakes of his campaign team whilst giving substance to their idealism.

Second, Jokowi’s campaign speaks to the importance of political capital.  Not only did PDI-P fail to back him up, it itself failed to build the larger coalition that was required not just to win office but also to govern.  The upside is that Jokowi’s victory in the face of PDI-P’s failure empowers him to reach out and build a broad coalition in government.

Fortunately, he has so far shown himself to be a natural consensus building.  Despite being savaged by a relentless smear campaign he has not become embittered nor allowed himself to wallow in self-pity.

Critics might argue that this purist approach very nearly cost him the election but it does set him up well for government, giving him vital cultural capital to become the sort of reformist democrat that the Muslim world so desperately needs.

Third, the campaign made it clear that Jokowi is a man of considerable personal character and integrity.  Though sorely tested, he refused to return fire and engage in negative campaigning. He also refused to engage in the politics of using religion instrumentally.  Critics might argue that this purist approach very nearly cost him the election but it does set him up well for government, giving him vital cultural capital to become the sort of reformist democrat that the Muslim world so desperately needs.

Fourth, although his campaign was not well-organised, and he did not always effectively communicate his vision, Jokowi showed himself to have concrete plans for reform and development.

There is no question that he wants a cabinet comprised of strong professionals and proven technocrats, not party hacks and deal makers.  Needless to say, squaring this with the need to lock-in coalition support won’t be easy but it is immensely important that he is trying.  We should expect this government to be rich in human capital.

Finally, it is clear that Jokowi aspires to be a transformative leader.  Of course, no president wants to be seen as less than fully supportive of reform and development but Jokowi appears to be deeply committed to transforming Indonesia at every level.  There will certainly be disappointments ahead, but if the Jokowi government can consolidate social, political, cultural and human capital in reasonable measure then this will be Indonesia’s best government yet.