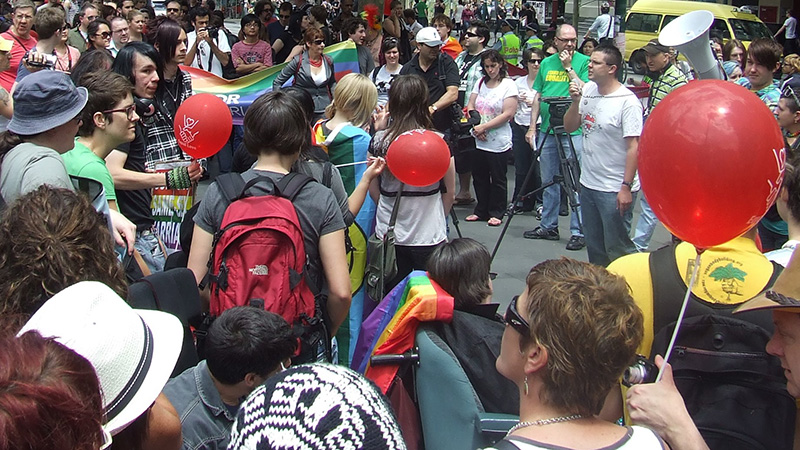 The Australian Bureau of Statistics (ABS) announced on 15 November 2017 that over 61% of Australians said yes to the question: “Should the law be changed to allow same sex couples to marry?” With almost 80% of eligible voters taking the time to participate in this voluntary postal survey, the response by the people was certainly very spirited.

Of note was the very high but negative correlation (-0.67) between the strength of vote for Christian advocacy parties and a No vote. This meant that the higher the vote for a Christian advocacy party in an electorate the last election, the lower the Yes vote in the ballot in that electorate. Of interest too was the quite strong positive correlation (0.52) between the strength of vote for the Greens and a Yes vote, namely the higher the vote for the Greens in an electorate, the higher the Yes vote in that electorate.

Having spent the past quarter century living outside Australia, the result of the Ballot gave me cause to reflect on the development of Australia. I grew up in a Queensland under the firm control of the rather evangelical state government of Sir Joh Bjelke-Petersen.

During this time our leaders animatedly raised the spectre of various moral panics. The threat of “socialism” from the southern states was presented as an existential threat to the Queensland way of life. Fears of pornography meant that all literature had to face special and more rigorous censorship before entering Queensland. No Playboy for us! There were major battles on allowing sex education at school, while biology text books deemed too explicit were banned. Condom vending machines, seen as encouraging pre-marital sex, were banned. Young pregnant, but unmarried, women were squirreled away to give birth in disgrace and have their newborns removed from their lives at birth. Sexual minorities were to be derided, ostracized, avoided and pretended out of existence.

But how times change. Almost 61% of my fellow Queenslanders said yes to this question, as did a clear majority of people in every region of the nation.

No doubt there is further to go on removing other vestiges of discrimination against these citizens. The revered Australian ethos of a ‘fair go for all’ has prevailed in the face of a spirited campaign by fellow citizens concerned about the erosion of traditional (religious) values and institutional arrangements.

To flesh out these results the study observed that “Australians are believed to have a great deal of freedom, not being constrained by traditional cultural and religious beliefs. This freedom is perceived to be enjoyed to the fullest…”. While Australians may take pride in such a finding the study adds the cautionary caveat “but it [this freedom] is viewed as both a positive and a negative (i.e too hedonistic)”.  As such, this view of ‘progressive’ may be seen as a backhanded compliment.

On the other side, Indonesians may take pride in being seen by their southern neighbours as ‘religious’. However from an Australian perspective this may be a return back handed compliment. The study went on to explain the “concern that some Australians have towards Islam and a lack of understanding of the moderate nature of Islam in Indonesia means that associations with ‘religion’ can be framed negatively.…”.

The results of the Australian ballot are likely to re-enforce the ‘progressive’ views that Indonesians have of Australia.

These developments take place at the time when Indonesia itself is facing a number of moral panics. The issue of ‘communism’ as a threat to the constitutional order has suddenly re-emerged in public discourse. Fears of illicit narcotics, pornography and prostitution have become popular themes for moral and political mobilization. Sexual minorities, long tolerated (at least in the wider public domain), are being increasingly marginalized and even criminalized.

Indeed the issue of religious interpretation has become an increasingly constrained field of public discourse with the potential for accusation and charges of blasphemy awaiting those willing to enter the fray. These developments would appear to re-enforce the ‘religious’ view that Australians have of Indonesians.

Into these developments, however, comes a recent verdict by the Indonesian Constitutional Court. A group of citizens who embrace some of Indonesia’s indigenous faiths petitioned the Court to declare parts of the Civil Administration Law to be unconstitutional. These citizens argued that they face much discrimination because they do not subscribe to any of the country’s six “official” religions. They also argued that this law contributed to this discrimination through administrative disenfranchisement. These six “official” religions consist of Islam, Protestantism, Catholicism, Hinduism, Buddhism and most recently Confucianism.

To the surprise of many, the Court accepted fully the petition declaring these articles of the law were unconstitutional and thus legally invalidated. This represents an important victory for those citizens and a boost for freedom of religion in general. The history of the struggle for indigenous faith against the pressure for all citizens to embrace one of these six official faiths has a long and often sad history in Indonesia.

In a telling statement the Chief Justice of the Court stated that “Presidential Decree 1 of 1965 on the Prevention of the Misuse and/or Insulting of Religion does recognise official religions. Even so there are some among adherents of indigenous beliefs who state ‘How can it be that it is the foreign ones that are recognized?’. We all know, if we wish to be honest, that the six faiths or religions are actually foreign. So the foreign ones are recognised, but the religions of the forefathers that are genuine to Indonesia – why are they not recognised?”. By the standards of contemporary discourse on matters of faith, these words will resonate.

This verdict, in many ways, complements and pushes further with efforts by customary community rights advocates to argue for the land and wider rights of customary communities. These groups won a landmark Indonesian ‘Mabo Decision’ through Constitutional Court Verdict 35 of 2012 that declared as unconstitutional provisions of the Forestry Law defining Customary Community Forests (CCF) as being part of national forests. The decision should see several million hectares of CCFs returned to their historical and rightful custodians, namely the customary communities (a term that may best be understood to be like indigenous communities in Settler Societies like Australia).

Indonesia’s Reformasi at the turn of the century liberated many groups and communities that had been hidden or suppressed during the previous authoritarian eras. The compelled and quite uniformed identity citizens had to adopt during the rule of President Soeharto soon broke down with Reformasi.

At the time, a plethora of communities and groups ‘suddenly’ appeared and all sought their place under Indonesia’s new democratic sun. Yes, this did include vigilante religious sectarians, but it also included those such as religious, sexual and racial minorities. Politically it also saw an explosion of political activism as the old 3 parties were joined by many new ones.

For some this new public pluralism was perceived as a scary threat to national unity. To others it actually represented a breakdown in the moral order of society. For a society like Indonesia, where issues of religion remain matters of prime identity, it is not surprising that moral panics can garner easily a clear political legitimacy.

The initial liberation of the private domain of citizens (expanded civil liberties) at the start of Reformasi has been steadily constricted by demands for a new moral religious order. Lacking has been a coherent ideology that upholds the pluralist roots of the Republic.

One key reservoir of pluralist legitimacy had been the nation’s founding philosophy, the Pancasila (Five Principles). Sadly, Pancasila fell out of favour due to the way it was exploited by the government of the pre-democratic era as a blunt instrument to silence alternative views and interests.

In late 2016, the sight of hundreds of thousands of demonstrators draped in pseudo-Arabic attire demanding the jailing of an effective local government leader, but hailing from a religious and racial minority, seemed to awaken a realisation that Indonesia’s pluralist roots were being undermined.

This creeping compulsion of a conservative kind of revivalist Islam was now an issue that was affecting the polite citizenry and not just the ‘other’; people from some or other ‘fringe’ minority.

One response to those demonstrations has been to see a re-awakened look at Pancasila. Another response has been for state authorities to begin to take a stand against religious bullying. As with the follow up action to the outcome of the ballot in Australia there is much to be done in Indonesia to provide recognition and support and a sense of security to the various minorities within the country. It will be a long term effort.

These developments in both nations reminds that there is no end to history, no linear trajectory and that societies continue to develop and evolve. How to measure whether any development in a society is good or otherwise is a profoundly ideological issue.

For my part expanding the capacity for citizens to live in security and be enabled to live their lives without unfair imposition on, or from, others is a good thing. In this regards I would have to say that the Ballot in Australia and the Constitutional Court verdict in Indonesia both represented good things. They have advanced the interests of citizens who have long been marginalized and faced discrimination.