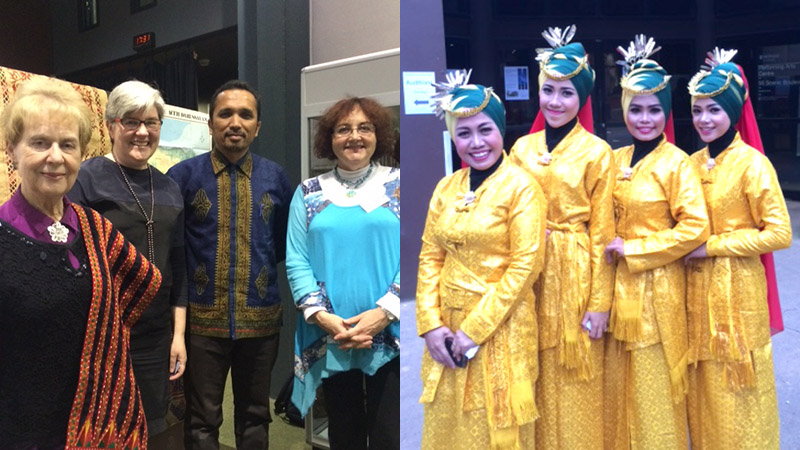 On September 26, Dr Megan Power of the Australia-Indonesia Centre opened a new exhibition of the Material Arts of Aceh, titled Keuneubah Indatu (“Aceh’s Cultural Heritage”), as part of the 15-day International Conference and Cultural Event of Aceh.

The exhibition comprises musical instruments, textiles, embroidered cushion covers, jewellery, wedding ornaments, traditional costumes, rare books, and books on the arts of Aceh from various ethno-lingual groups living in the province for centuries, including the Acehnese, the Gayo, the Banyak Islanders and the Tamiang Malay.

Some of the objects on display will be used in a performance of select music and dance from the Acehnese, Gayo, Banyak Islander, and Malay-Tamiang ethno-lingual groups in Aceh at a concert on the last night of the conference – Wednesday 28 September at 7pm – titled Piyasan Aceh (“Rejoicing in the Arts of Aceh”).

The full-length concert will feature such music and dance items as the famous saman Gayo song-dance that recently received international recognition as an item of Intangible Cultural Heritage by UNESCO.

The master performers from Aceh who will perform the various items will include the seudati song-dance leader Hasan Basri from Aceh’s west coast, the sikambang legend singer Anhar Sitanggang from Aceh’s offshore Banyak Archipelago, and the Gayo guel and didong dances from mountainous Gayo-speaking area of the province.

The final day also features the last screening of Acehnese films, which have been hosted by MADA Gallery Theatre in Monash University’s Caulfield Campus throughout the conference. The final screening will be from Wednesday 28 September 3-5pm, and includes a discussion panel.

The ICCE Aceh conference is co-convened by Monash University’s Professor Margaret J. Kartomi, a renowned ethno-musicologist who earlier this month was one of only three foreign recipients to be honoured with a prestigious award for outstanding contributions to the promotion of arts and culture from Indonesia’s Education and Culture Ministry.

For more information about the ICCE Aceh, visit the portal here.