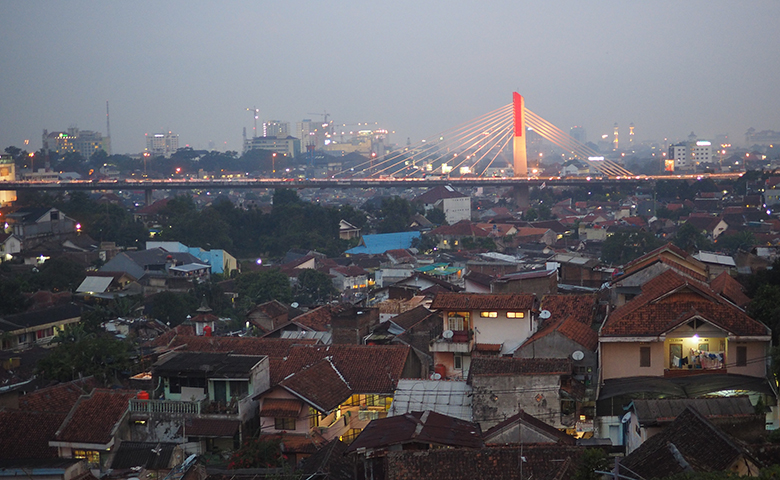 My memories of my latest trip to Indonesia (April 2016) were shaped as much by the hours spent in traffic and twisting ankles traversing uneven and decaying pathways as they were by the time I spent with some truly inspiring intellectuals (both in academia and government), innovators and creative artists.

Which pretty much sums up my memories of the past twenty or so visits to this wondrous country.

In a country that is rapidly transitioning from developing nation status to newly developed nation status, with a global GDP rank currently standing at 16th, and a projected rank of 4th by the middle of this century, it is hardly surprising then that infrastructure is the number one priority of the Indonesian government.

As it was for China and Taiwan, South Korea, Singapore and Japan sequentially before that.

Indeed my time spent in Jakarta, or Surabaya, or Bandung or pretty much everywhere in this rapidly modernising economy always induces a strong sense of déjà vu, specifically of my time living in Shanghai a decade or so ago, Japan in the 1980s and Hong Kong in the 1970s. Awesome but superficial modernity on one side of a street; crumbling infrastructure yet rich culture on the other side.

So back to the dichotomy of the demand for innovation and the demand for maintenance. What we see on one side of the street is an erosion of the notion of what is innovation i.e. if it is new and represents the iconography of a modern society, then seemingly it is ‘innovative’. And innovation is good, isn’t it? Does it really matter that those beautiful marble pavers are only one centimetre thick? On the other side of the street we see enormous challenges that can be put aside until innovation some time down the road comes to the rescue. Do we really need to spend money on maintenance of something that surely will be replaced… one day… surely?

I ask myself this: Given the discourse around innovation, emanating as enthusiastically from Jakarta as from most global capitals, with disruptive technology, creative leaps and idea revolutions among terms that are now a regular part of the lexicon, are we building a culture of technological determinism that not only threatens to usurp preservation and maintenance (and human safety) but also threatens to undermine the value of innovation itself?

In a recent article, Innovation is Overrated, Laura Bliss warns that in our adulation of the gods of innovation we can overlook the value of the care-givers, protectors and maintainers of society who may prevent the problems arising for which innovation is expected to overcome. Moreover, Bliss points to the work of Lee Vinsel at the Stevens Institute of Technology, which suggests the term “innovation” is overused to the point of meaninglessness.

While innovation doesn’t simply come from the codified methods of science, or the rigour of research and development, or the analyses of social and economic study, or the constant inquiry and inspiration of creative arts and design, the lessons from these pursuits should be heeded in investment in innovation.

The most resonant of lessons is that not all artefacts of science, research and development result in what the lay person, a politician or an industrialist might consider a success. The very nature of these pursuits is done so bearing a risk that they are more likely to result in lessons of value for further enquiry than in value that can be measured in terms of revenue streams, problems solved or returns on investment. Indeed, only a very small proportion of the overall portfolio of investment will produce the ‘winner’ so keenly sought.

But, as Vinsel argues, “the vast majority of technologies that surround us and underpin our lives are not innovations. And the vast majority of labour in our culture is not focused on introducing or adopting new things, but on keeping things going.”

There will always be a place for innovation and for innovators, but in the meantime the legacies of the past remain with us; for example crumbling, dysfunctional, and dangerous infrastructure. Surely here there is a place for those who fix, care for, preserve and expand the life of past investments so that while the innovators suffer for their art and vision, the rest of society doesn’t suffer in the interim.