Home » Knowledge Bank » Indigenous » Working towards a culture of respect 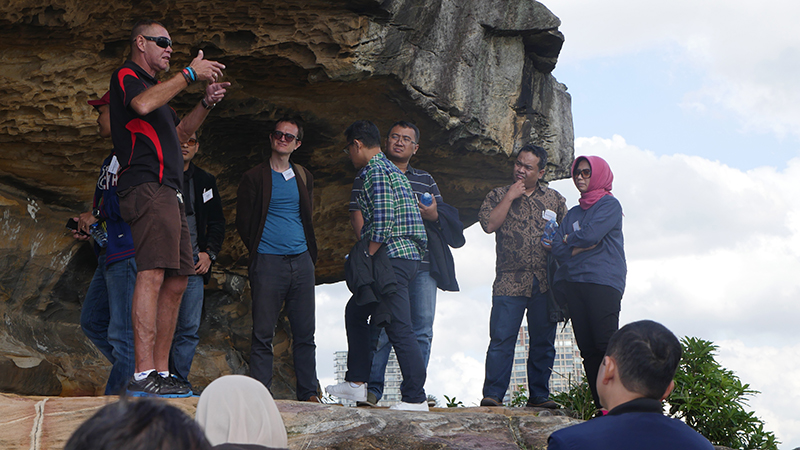 Australia could learn a great deal from its populous neighbour. As Indonesia continues its transformation into a consolidated and certainly at times rambunctious democracy while maintaining brisk rates of economic development, it has achieved this whilst recognising, preserving and celebrating its ancient and diverse cultural roots and traditions.

As I drove to work earlier this week I was listening to community radio, the breakfast host announced a prize, “…a trip to Flores in Indonesia to hang out with komodo dragons…”. My mind returned to an experience I’d had on one of my first trips to Indonesia in the early 1990s.

I was on a Qantas flight heading for a conference on maritime security in Nusa Dua in Bali. I was surrounded by Australians whose behaviour suggested they were on holiday. The captain announced that we were commencing our descent into Denpasar. “Denpasar?” shrieked the woman next to me. “We’re not going to Denpasar; we’re going to Bali.” Others around her joined the anxious discussion convinced they’d boarded the wrong flight. “Denpasar is the capital of Bali”, calmly explained the flight attendant, who I suspect had heard this before. Sadly, I don’t think my fellow travellers knew that they were landing in Indonesia either – Bali was the brand – there was no room for Indonesia or Denpasar in the minds of these holidaymakers.

I was shocked at the time, that one might travel to another country without having done even the most basic research about the destination. But I am optimistic that much has changed since then (well, a bit), and listening to the radio this week I felt hopeful that with the Indonesian Government’s current plans to create ten new Balis – one of which is on the island of Flores – many more Australian travellers will experience not only the extraordinary beauty, but also the cultural, religious and linguistic diversity of our near neighbour by visiting different parts of this amazing country.

Earlier this year I dined with a group of young emerging Indonesian leaders. They were naturally curious about Australia’s Indigenous peoples and cultures. In conversation with one young Indonesian woman, she said she had found most of the Australians she’d asked, unable to say much about Indigenous Australian cultures and peoples.  She naturally wondered why. The reasons, I said, are tragic, and unlikely to change until we find a way, as a nation, to heal the wounds of the past. I suggested she listen to Paul Keating’s Redfern speech (I still think it’s one of the best articulations by a white leader of the reality of this country’s tragic recent past).

This brings me to my point.

Can we learn from our Indonesian neighbours about the value of preserving, celebrating and integrating the many and diverse Indigenous cultural, religious and linguistic traditions of our country into our common future as a nation?

Can we see the possibility of a unified national polity which respects and celebrates its cultural history, diversity and traditions?

My hope is, that as more Australians travel to the ten new Balis, and learn more about the richly diverse nation to our near North, they will begin to see how things could be different at home, and perhaps find new ways to embrace and celebrate our own long, magnificent culturally diverse history.