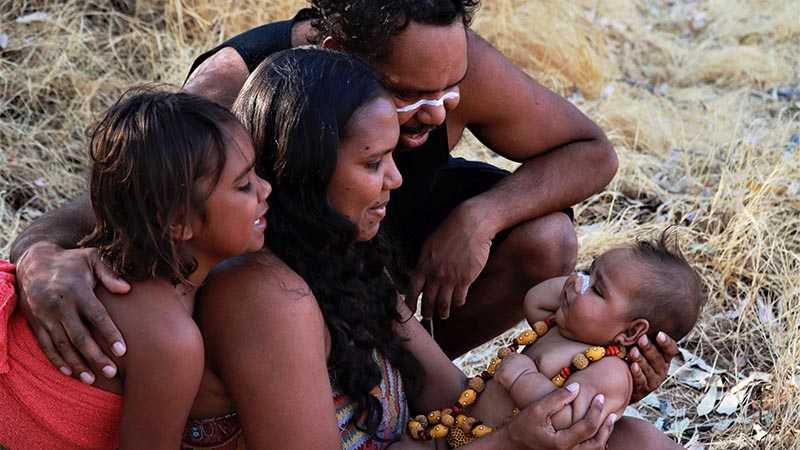 Indigenous infants in Australia and Indonesia will benefit from early life health and wellbeing strategies that are culturally protective, place-based and community driven.

Approaches that start from the parents’ adolescence and that support and build the roles of both male and female carers, especially in terms of mothers’ mental health, will strengthen foundations for Indigenous children so that they are able to grow and thrive.

These and other findings have just been published based on an Australia-Indonesia Centre funded study that took the form of two roundtable discussions about the holistic prevention of non-communicable diseases (NCDs). The study focused particularly on a child’s first 1000 days of life – from conception to age two – and on families in the Indigenous communities of Australia and Indonesia.

“Risk factors for non-communicable diseases are increasingly shown to be caused or exacerbated during a child’s first 1000 days,” says Elizabeth McLachlan from the Indigenous Health Equity Unit at the University of Melbourne.

“However” she explains, “through equipping families with the self-determination and social and economic resources to be the best parents for their children, the first 1000 days provides a unique opportunity to minimise risk factors and break cycles of disadvantage in health and wellbeing”.

The University of Melbourne, First 1000 Days Australia, Universitas Indonesia (UI) and Universitas Pertanian Bogor (IPB) were key partners in the study, which brought together fifty health workers, policy makers and government and NGO representatives over the two roundtables – one in Indonesia, one in Australia.

Both Indonesia and Australia are home to many different Indigenous groups, who speak hundreds of different languages and value a diversity of cultures and histories. Both are united in their experience of Indigeneity in the region. In Indonesia, however, unlike in Australia, the definition of ‘Indigenous’ is still contested; it remains difficult to define ‘Indigenous’ and simultaneously accept the ethnic and cultural diversity within the different groups and cultures.

Of primary importance within Indigenous communities in both Australia and Indonesia are the strengths of community and family. If community and family are valued and strengthened and economically empowered, families will have what they need to bring up strong healthy children.

Dozens of recommendations are put forward in the report, titled ‘Regional Initiatives: Building Health and Wellbeing in the First 1000 Days’. These recommendations are spread across eight themes, ranging from ‘preparation for parenthood’ and ‘community and culture’, to gender and policy.

Overall, participants concluded that the most important factors in a child’s health and wellbeing are a strong foundation in the parents’ health and family planning, quality learning opportunities, and empowered families and communities. The recommendations reinforce the message that if policy, training and service provision related to Indigenous infant health take into account the different cultural, linguistic, and socioeconomic contexts at play in their communities, the health and wellbeing of future generations will benefit substantially.

The report calls for greater understanding of communal living scenarios. ‘A broad, non-biological definition of family is crucial,’ it states, ‘inclusive of any and all immediate carers of a child’. Also under this theme, the report highlights a need to ‘build leadership and capacity, and economically strengthen families so they are able to enact their own agency’.

The roles of mothers, fathers and carers

More focus is called for on the mental health conditions faced by mothers before, during and after pregnancy. Also predominantly affecting women, and pregnant women even more so, is domestic violence. These two factors, the report states, ‘have a substantial influence during and after pregnancy, and need to be considered in any approach to combatting NCDs’. It is stressed, however, that the First 1000 Days model should emphasise the positive impacts that ‘valuing men as fathers, care givers and role models’ has on the health and wellbeing of the child. KASIH, a program for supporting soon-to-be fathers in Jakarta, is already showing signs of popularity and success.

The report states that ‘programs for children prior to school and kindergarten have been shown to have immeasurable benefits’, and thus calls for universal access to appropriate early learning resources. One recommendation is for the development of culturally relevant assessment tools to ensure that developmental delays and other conditions are being noticed and responded to. (Another AIC funded study is currently working to translate – culturally and linguistically – the American psychiatric assessment tool ‘CES Depression Scale’, for more accurate use with young people in Indonesia.)

According to the report, ‘Adolescence provides a window of opportunity… to empower youth to improve their own health… and, in doing so, that of any children they may have’. It recommends increased adolescent education on the requirements for a healthy pregnancy, infancy and childhood alongside skills, leadership and capacity building. The report also calls for exploration of the various reasons (cultural, social and economic) for early marriage and sexual debut.

The report recommends that solutions must be place-based and should strengthen the community through their process. This is, in part, to combat the separation from culture and identity caused by ongoing colonisation and dispossession of Indigenous communities. This includes exploring traditional practices that could help promote healthy practices and prevent NCDs, and employing innovative communication methods for reaching families who struggle with literacy or who live in remote areas.

The full report is below. It includes further discussion and additional recommendations on workforce and education, policy, and research.

The First 1000 Days Australia initiative is being developed by staff at the Indigenous Health Equity Unit at The University of Melbourne, under the directorship of Professor Kerry Arabena.

The First 1000 Days movement also exists in Indonesia, where it shares the nutrition focus of the original movement. However, because this study looked specifically at Indigenous contexts, it used the well-developed, Indigenous-conceived and -led Australia model to explore NCD prevention among Indigenous communities in both countries.