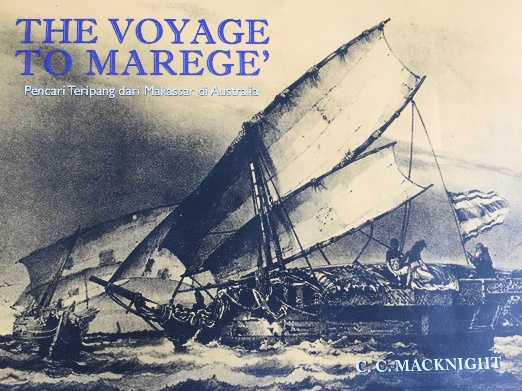 On the front page of the local newspaper, Tribun Timur I read a headline, “Diplomasi Teripang Indonesia-Australia” (Indonesia-Australia Sea-cucumber Diplomacy), heading a long article about our event the previous day: the launch of the Indonesian translation of Professor Campbell Macknight’s book, The Voyage to Marege’. This, classic academic work was originally published in 1976 by Melbourne University Press. It contributed to greater understanding of the extent, nature and history of the teripang (sea-cucumber) industry that took place between Makassar and northern Australia from the middle of the 18th century until the early 20th century. Sea-cucumber diplomacy? It was perhaps too quaint a term, although we already have sports diplomacy, fashion diplomacy, film diplomacy and so on.

But in the teripang industry’s origins there was no diplomacy. There was however, plenty of people-to-people contact. Beginning from around 1750 – 80, according to Prof Macknight, every year up to a thousand sailors from Makassar would undertake the long and dangerous voyage to Marege’, a Makassar term for present day northern Australia. Around Arnhem Land in shallow coastal waters in particular, they found rich stocks of high quality sea-cucumber which they harvested during the December – March monsoon period. After a few months of collecting these holothuria, boiling them and drying them to preserve them, the sailors from Makassar would return and sell their harvest at very attractive prices to Chinese traders, who would then sail to Hong Kong, Xiamen and other ports to on-sell to the restaurants and inns of the Qing dynasty. In present day northern Australia the sailors from Makassar got to know the local Aboriginal tribes well. We know this because there are many words from Makassarese still used in local Yolngu and other Aboriginal languages. And both Aboriginal and Makassarese people still remember through stories and art the heyday of contact during the teripanging years.

We held Prof Macknight’s book launch in the old chapel at Fort Rotterdam (Benteng Ujung Pandang), in Makassar just north of Pantai Losari. The chapel had high ceilings, old shuttered windows and no air-conditioning, but a lovely atmosphere. From this fort for centuries, Bugis, Chinese, Dutch, Makassarese and other traders would carry goods from eastern Indonesia to the world. Fort Rotterdam used to be on the sea front, where ships could tie up. Now on reclaimed land in front of the fort is a busy road, food stalls, a jetty and a hotel.

The Makassar publisher Ininnawa had books on sale and Pak Anwar Jimpe Rachman, one of the translators, gave a brief talk about how long it had taken to translate the book and the problems he had faced. Being a former interpreter/translator myself, I understood the challenges, especially with a technical although very readable account of a trade (no – an industry, according to Prof Macknight) that ended over 100 years ago.

And the end of that industry is where the diplomacy comes in. The end began gradually as the Australian colonies[1] began to assert sovereignty over their borders, and as the Dutch East Indies government likewise began to accept the rules and practices of international trade. From the early 1870s the Government of South Australia (which administered the Northern Territory) had begun thinking about licensing trepangers from Makassar in north Australian waters; but the first moneys extracted from the Makassans was in 1882, and was duty on imported goods such as rice, sprits and tobacco. A year later the Dutch Consul in Adelaide complained to the South Australian government on behalf of the Makassan sailors, saying it was not right to tax them on goods used as rations. He said the trepangers felt unfairly treated because they had been undertaking this trade long before the existence of the new Australian colonies. This was perhaps one of the earliest recorded “diplomatic representations” received in Australia’s history: from a Dutch official on behalf of sailors from Makassar. Not surprisingly, the South Australian government did not respond, and by 1906 increasing fees, costs and the difficulty of obtaining licences made it no longer possible for sailors from Makassar to continue collecting trepang from northern Australia.

The day after the book launch, Prof Macknight gave a lecture at Hasanuddin University titled “One Thousand Years of Coming and Going in South Sulawesi: Taripang, Lontara’ and Ceramics”. This was part of our Consul-General’s Guest Lecture Series, and I introduced Prof Macknight to around 100 enthusiastic lecturers, historians, writers, Australian alumni and university students.  I emphasised the importance of knowing history, especially stories about your origins, and the facts about those who have gone before: as Winston Churchill and many great leaders have said “those that fail to learn from history, are doomed to repeat it”. Knowing the truth about the past is increasingly important, especially in a world of “alternative facts” and “fake news”.

The professor’s talk tied a lot of threads together about Sulawesi and Australia. While most Australians know very little about eastern Indonesia, and especially Sulawesi, in fact for nearly 100 years a small number of Australians have been at the forefront of research about Sulawesi’s history and prehistory, always working with local colleagues. Australians have also been pioneers in modern trade with the people of eastern Indonesia; and our troops played a vital role at the end of WWII in bringing peace back to the region.

Prof Macknight also presented evidence for a rich culture and history of expanding settlement in South Sulawesi from at least 1000 AD. He also pointed to recent archaeological discoveries which show that humans lived in South Sulawesi at least 50,000 years ago. In the Leang-Leang caves in Maros, Australian and Indonesian archaeologists have found evidence of the oldest known art in the world (see the Nature article here). Budianto Hakim, one of the researchers, was present at Prof Macknight’s lecture.

Prof Macknight said it was important for Indonesians to read and write more of their own history, and to read and write more about eastern Indonesia: most histories of Indonesia focus mainly on Java, Sumatra and Bali. Modern historical research can draw on the tools of archaeology, anthropology, philology and sociology, even geographic information systems and other scientific techniques, to help unravel the truth of local history.

The questions that followed Prof Macknight’s talk were illuminating, and were evidence of a deep interest in learning more about Sulawesi’s fascinating history, and prehistory. Now it is over to the younger Indonesian historians of the future to delve even deeper into the past. Own the past and you will own your future!

[1] Australia only became an independent state from 1 Jan 1901. Prior to that it consisted of six self-governing colonies which were part of the British Empire, and for over 40,000 years prior to British arrival was inhabited by several hundred Aboriginal nations.