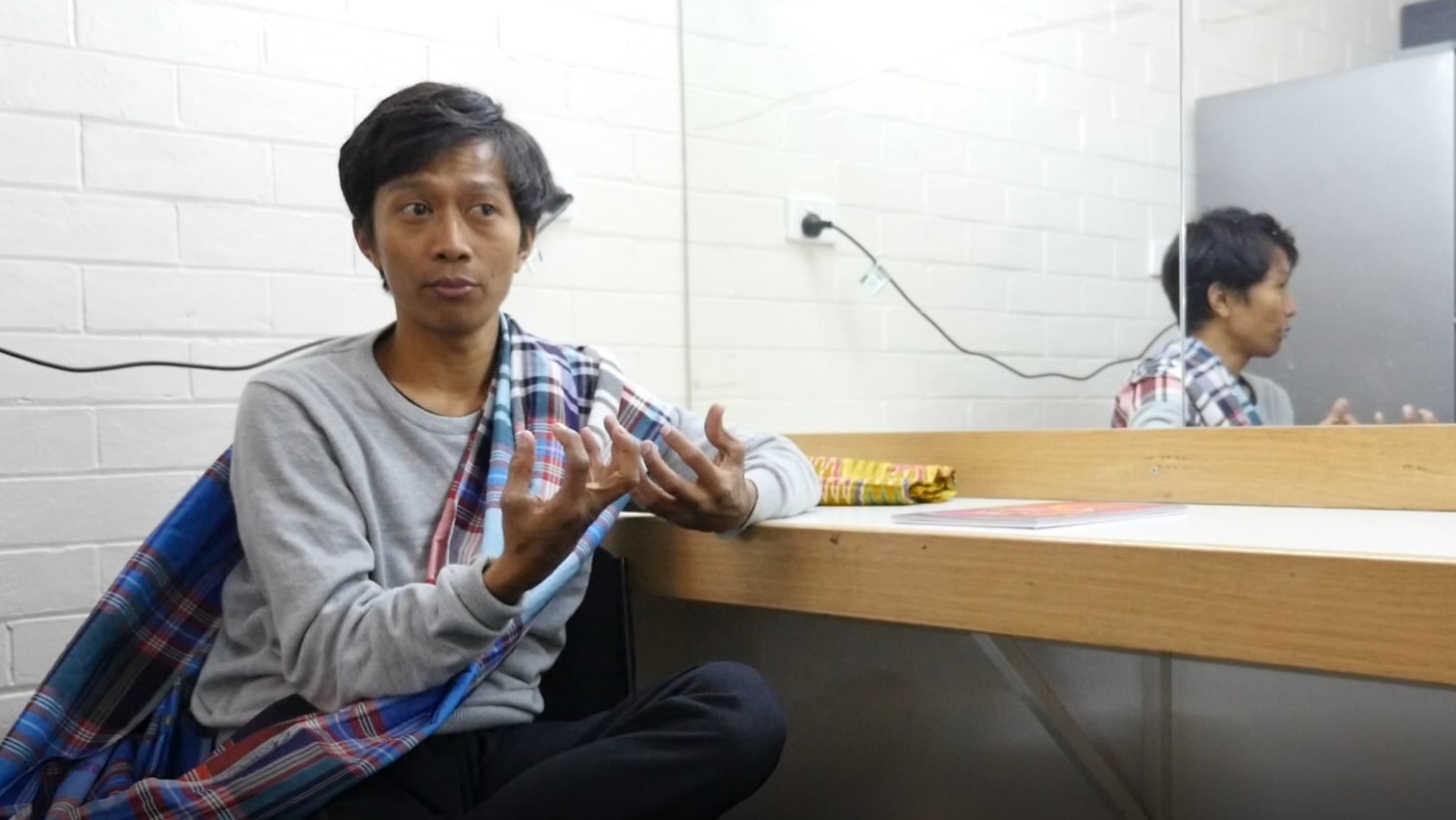 “Questions are the reasons why we get connected. The reason why we would like to know each other… to know anyone.”

Connecting people drives much of Abdi’s art: connecting others with his Bugis ancestors; connecting Indonesians with Australians; connecting Makassans with Yolngu people of northern Territory – and connecting himself with his past self:

“When I was formally introduced to the arts in university… I realised arts connect me to my childhood.”

Touring his show Story of a Wanderer at the Castlemaine State Festival in March 2019, Abdi Karya paused to share his views on various subjects, but when asked how Australian audiences might interpret his show differently to Indonesians, he preferred not to speculate.

“What I like is not only interpretation, but also misinterpretation. That develops – that puts us forward into questions.”

The show presents stories of his life and influences, mostly in the abstract, as he moves amongst a seemingly endless array of sarongs, with no two the same. The sarongs are central to his movements, as he shuffles, ties, studies, wears and feels them – interpreting and performing memories.

He also approaches a microphone to make music using his voice and looping pedals, and to share anecdotes verbally, such as of his marriage proposal to his wife, where the gifting of a certain relative’s sarong symbolised the question.

“[Art] stays in our memories… and it later becomes a story to be delivered by generation to generation, like Yolngu people in the Northern Territory [talking] about their stories of creation… of their ancestors, of the land.”

Abdi sees sharing stories and posing questions as key to developing better mutual understanding between people of different cultures. (Something he suggested may happen more often if people spent less time on their phones.)

When an Australian friend of his found some broken centuries-old pots from Makassar in the shifting sands of Arnhem Land’s beaches, he took the opportunity to explore this ancient trade of art and stories. He sent the same style pots from the same South Sulawesi coast to Arnhem Land to be painted with local Yolngu stories. They were then returned and Abdi curated a Makassar-Yirrkala pot exhibition at Rumata Artspace where he worked at the time.

He is now based in Yogyakarta with his wife and two children, but Rumata Artspace continues to maintain ancient connections with the Indigenous people of northern Australia, most recently by hosting the Makassar leg of the Australia-Indonesia Centre’s ‘Makassar-Yirrkala Artist Exchange Program’.

The resulting exhibition from that program opens at Rumata this weekend, on 30 June 2019, on the sidelines of the Makassar International Writers Festival, at which the artists will speak.

Read about Abdi Karya’s show Story of a Wanderer from its original outing as Memakai-Dipakai at Jakarta Biennale 2017.