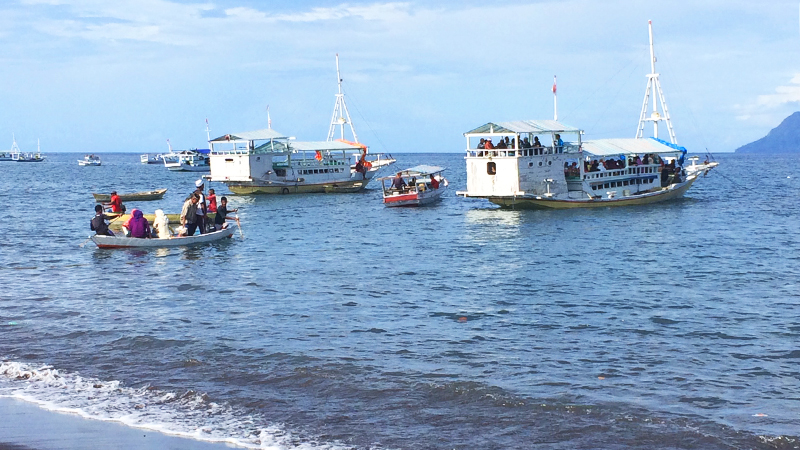 Is it possible that anyone who has flown to Bali would not notice the glaring contrast between the images used to promote this “island paradise” and what one sees on the ground? Nearly everyone must wonder for a moment if places like Kuta Beach and Ubud have become textbook examples of killing the goose that laid the golden eggs.

No wonder, then, that tourism consultants are thinking of better ways to offer a more nuanced and less mobbed experience of this remarkable country. There will always be people who make a beeline for the Gold Coast or Kings Cross in Sydney, but what about the large number of travellers who hope to visit a place that’s interesting and enjoyable precisely because it is so different from where they have come from?

Given the importance of tourism to Indonesia’s economy, a lot hinges on how well or badly these challenges are addressed. This won’t be easy, but one new part of this equation is now a given. For the first time in countries like Indonesia there are now reliable, inexpensive airlines like Lion and Wing Air that offer low cost flights to places like Sulawesi and Kalimantan, Sumba and Maluku that previously would have taken days (or even longer) to reach on the Pelni ferries.

On a recent trip to Indonesia, my third, I flew to Ende on the eastern side of Flores on a very new 50-seat prop plane at a cost of $35, and came back overland about 400 kilometers overland to the western edge of this long narrow island, before returning to Denpasar from Labuan Bajo.

Traveling by bus around Flores is not at all difficult, yet during my January visit, I saw very few other westerners on any given day, even though Ende or Maumere are the jumping off points for a visit to Kelimutu National Park, where brightly colored lakes in dormant volcanoes at 1,600 metres are always listed among the ‘seven wonders’ of this sprawling island nation.

Kelimutu is one of many popular destinations for well-off Indonesian travellers who avoid overpriced resort areas popular with westerners. And one can travel to many interesting places around Indonesia for something like a fifth or a quarter of what it would cost to stay in more populous beachside resorts.

It’s also much easier to meet, talk to and at times travel with other Indonesian people who are also on the road. They often speak English, and are as interested in talking with international travelers as we are in meeting people who aren’t paid to interact with us.

One experience among many stands out. While in the national park, a young Swedish traveler and I met an Indonesian journalist who writes, photographs and blogs about interesting places around the country with funding from a governmental agency that’s involved with tourism.

South of Ende there’s a smallish and mostly empty-looking island, where on its north shore about 5,000 people live. There is no mention at all of this island or its peoples in guidebooks or even online.

With the young Indonesian writer, who also had never been there, we went for an overnight stay with the principal of a school in a substantial town that sprawls in a shallow line along ten kilometres of shoreline.

The principal told us that the populations on the island and the mainland have retained their unique identities for more than 1,000 years. In the period of 900 AD, Islamic traders had used this offshore island setting as a hub for trading and transporting slaves through the entire eastern half of today’s country. On the mainland, the populations are Christian from one end of the island to the other. On the island, they are Muslim.

Visiting a farm with an Indonesian exporter from Surabaya, I learned and saw with my own eyes that the area around Maumere is justly famous throughout Asia for the size and quality of the avocados. At another point in our travels, nearer the eastern tip of Flores, there were spectacular beaches with house-sized boulders and no development at all. The setting gave one the impression of having been transported magically to the Seychelles or Virgin Islands, where idyllic scenes like this have been used for decades to promote tourism.

And while traveling the length of Flores on local buses, the large number of children under 10 compelled one to recognise that, while in the West we feel concerned when talking about the need for population control, it’s in Christian places where birth control is not available that population pressures are sometimes worst.

Wouldn’t other visitors be as curious about such things as I was, I kept thinking? Why aren’t more people making the tiny effort to fly to dozens of other places around the country, given the flights that are easily booked, so inexpensive and much safer now than 20 or 30 years ago?

My own tentative answer to these questions is that guidebooks and promotion generally compete in the marketplace to cover the same places. If settings further away were also covered, these guidebooks would become even larger and more expensive than they already are.

To encourage at least a sliver of this tidal wave of international visitors to go to different parts of Indonesia, it is the government and universities that could be in the best position to explain to people what the choices are. Guidebooks already do a good enough job of covering hotels, restaurants and major tourism attractions in brief chapters that touch on most the places one can fly to, but there’s little to nothing on the history, the nature, culture, settlement patterns and politics of most places.

Substantial booklets that delve into these topics, based on places to which people can fly, would be of immense value to travellers in ways that mass market guidebooks never can or will be.

The point is not to ‘resortify’ more parts of the country. But for the ever growing number of people who’ve already been to Bali, or upon arrival don’t want to be there in the first place, visitors can be offered the resources they need to better understand what life is like for people who live in different parts of this amazing country.

Ben Read is a US-based freelance writer and adventure traveller