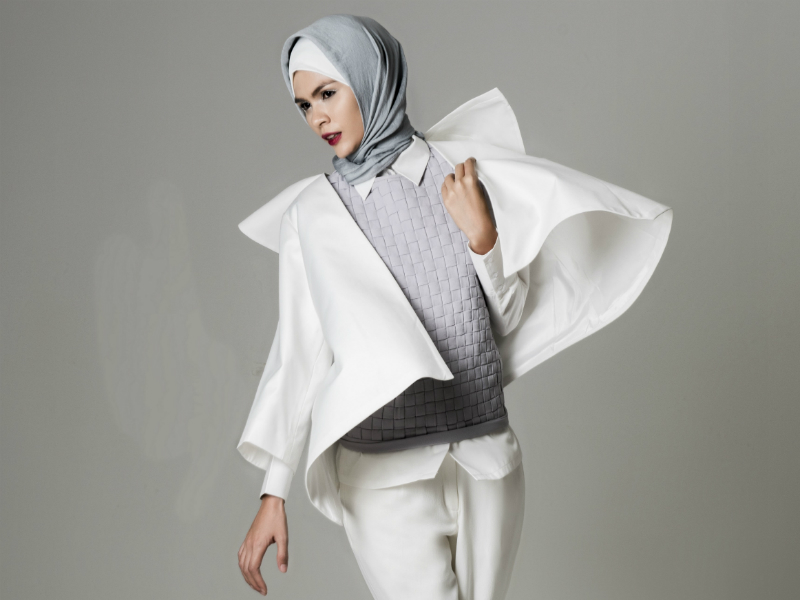 ETU, designed by Restu Anggraini, will make its Australian debut on the runway at the Virgin Australia Melbourne Fashion Festival (VAMFF) on Thursday 10th March 2016.

As the winner of the ANZ Australia-Indonesia Young Fashion Designer Award, ETU was selected to represent Indonesia at VAMFF 2016. This award is the result of a cooperative partnership between the Australian Global Fashion Alliance (AGFA), the Australia-Indonesia Centre (AIC), Jakarta Fashion Week (JFW), VAMFF and Femina Group. It provides a great platform for ETU to further position itself as a key player in the global fashion market after participation in London, Jakarta and Tokyo Fashion Weeks.

The ETU philosophy is centred on sophisticated and contemporary clothing that still retains the modesty required of Islamic fashion. In ETU’s Spring Summer collection, The Rationalist, Restu has been inspired by the shape of traditional men’s clothing, translating these masculine, boxy and oversized silhouettes into womenswear. Restu feels that clothing should be neutral and that the gender of the wearer shouldn’t affect the garment.

Coming from an Islamic background, Restu has noted that following the rules of Islamic fashion have traditionally meant a body covered, with looseness and thickness of clothing. Her collection aims to offer something unique with much more fluidity and lightness, whilst retaining the modesty required of the religion.

“We have a vision for ETU to be a global brand that emphasises innovation through the use of technology and materials science. We believe that a sustainable future can only be achieved by innovation,” said Restu.

AIC Director, Paul Ramadge, expressed his gratitude to those who support the vision of AIC to strengthen relations between Indonesia and Australia through the ANZ Australia-Indonesia Young Fashion Designer Award program.

“Through fashion we can establish global and mutually beneficial partnerships. Fashion can also facilitate and showcase innovation in an international market”.

Laura Anderson, Chairman of the Virgin Australia Melbourne Fashion Festival and AGFA, celebrates the designers and acknowledges the strategic significance of this relationship.

“We are thrilled to welcome and celebrate ETU at VAMFF 2016. I have loved their design aesthetic since I first encountered their label in 2014. The collaboration with the AIC and Jakarta Fashion Week has been a very important enabler of a strategic program to showcase and develop exceptional talent in a global market place, stimulate trade and investment, and foster cross cultural relationships. Together, Australia and Indonesia are creating an inspiring environment for creativity to flourish and trade to be maximised.’

“This partnership furthers the reach and contribution of VAMFF on an international scale. The Festival, in its 20th year in 2016, continues to reach new heights through its global collaborations. We look forward to welcoming our friends from Indonesia to Melbourne in March.”

The ETU Runway event will take place on Thursday 10th March 2016 at 5pm at Treetops at Melbourne Museum.

If you would like more information or to request an interview, contact Andrew Tijs on andrew.tijs@monash.edu or (+61) 3 9903 2727
Full Media Kit (Dropbox) featuring: