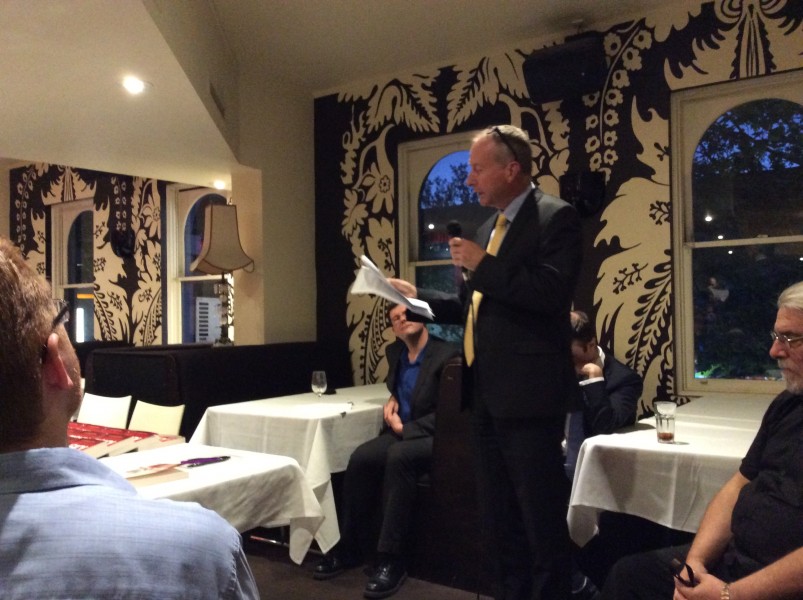 The book is a reminder that contemporary Indonesia is full of paradoxes, sometimes moving painfully slowly, at other times moving with almost terrifying speed. Some Indonesian entrepreneurs – the ones who build cities – like saying “We build the boat while we sail”

It is an honour to be invited to speak tonight.

Ari Sharp – a former colleague of mine at The Age and a young Australian who ventured to Indonesia to learn more about our near-neighbour’s way of life – deserves our thanks for producing a book that adds considerable value to the private, public and political debates about Australia-Indonesia relations.

On a personal level, it is so pleasing to see Ari’s emergence as an author via a University of Melbourne degree, a journalism traineeship at The Age, and a highly productive stint as a business and political reporter on major newspapers. As Ari’s former editor at The Age, I am proud of his achievements.

“Risky Business” is the work of a journalist with an inquisitive and investigative sensibility and with genuine story-telling skills.

It uncovers real stories, real facts, questions motives, lists vested interests and – in presenting its thesis that doing business in Indonesia is fraught because power rests in the hands of too few – ultimately lays out a case for change.

My experience tells me that some Australian companies – notably in the mining and resources sector – will be sympathetic to the line that Indonesia can be at times a tough place to do business.

Resources companies know about Indonesia’s growing pains – the challenges of weak rule of law, a constantly changing legal, regulatory and legislative environment, and the increasing power of state-owned enterprises.

They know, more than most, that doing business in Indonesia requires a straight back, a willingness to slash through the many barriers, machete-like, and genuine acceptance that things take time.

Not everyone, however, will agree with everything laid out in “Risky Business”. There are some uncompromising views expressed by those interviewed and by the author.

It is worth remembering that some Australian companies have performed extremely well in Indonesia – for example, Coca-Cola Amatil and ANZ. And Indonesia is not the only nation with muscle-flexing conglomerates, aggressive multinationals, political mates and closed-shop sectors.

In this context, this morning’s report in The Age – about how some of Australia’s largest companies avoid paying tax – is a timely reminder of the issues at play.

Business is business – and ego-bruising big business is not for the faint-hearted.

To his credit, after detailing what he summarises as the woes of foreign companies struck down by nationalism, suspected cronies, inept legislators or soul-destroying legal tussles, Ari puts forward suggestions for the incoming Jokowi Administration and for foreigners looking to invest. He also lists several reasons why things should improve.

This contest of ideas is, however, the reason why “Risky Business” matters – it reopens a debate in Indonesia and in other parts of the world that should be welcomed by progressive, internationalist thinkers and free-market advocates.

“Risky Business” ought to appeal to anyone keen to understand the complexities of life in Indonesia – from the scars of history to the peculiarities of community-based decision-making and the muddiness of national bureaucracy.

Ari takes us on a whirlwind tour of Indonesia, from Jakarta’s ubiquitous motorbikes, flash cars and glitzy skyscrapers to the back blocks of forested Sumatra and central Java.

The book is a reminder that contemporary Indonesia is full of paradoxes, sometimes moving painfully slowly, at other times moving with almost terrifying speed. Some Indonesian entrepreneurs – the ones who build cities – like saying “We build the boat while we sail”.

The timing for a debate about foreign investment in Indonesia could not be better.

The country has a new President – a populist commoner. Expectations are high that Indonesia will step higher on to the world stage.  It is a key player in G20 and ASEAN. And globalisation and the accompanying forces of technology, 24/7 travel and instant communication are forcing emerging nations like Indonesia to grow up quickly.

Some emerging nations – and I count Indonesia in this group – have the chance to leap-frog traditional growth phases if they embrace world-best systems of innovation.

I have been a frequent visitor to Indonesia since October 2012. Since January this year, I have been leading the Australia-Indonesia Centre, an institute based at Monash University that brings together leading research centres in both nations to tackle shared national challenges in areas like infrastructure, energy, health and medicine, and food and agriculture.
The centre is also working to improve bilateral relationships and Australians’ understanding of contemporary Indonesia.
My role has given me a seat at the table in some of the most influential government, business, academic and lobbying circles.

Is there legitimate concern about the barriers faced by foreign investors in Indonesia? Yes.

Are effective steps being taken to overcome or lessen these barriers? In some cases.

For example, the Red Meat and Cattle Forum, with representatives from Indonesia and Australia, is working to step up collaboration, joint ventures and shared benefits.

Talks are expected to resume soon on an Indonesia-Australia Closer Economic Partnership Agreement. Will enough business barriers be removed to make Indonesia a much more attractive place to invest for Australians? Will Jokowi be the leader who opens Indonesia to the world?

Indonesia is likely to remain a complex environment for investors, based on the current findings of global agencies. Pressing issues include improving governance, public policy-settings and the justice system – and that can’t happen overnight. That said, Indonesia may be an attractive place to invest for individuals and companies with tenacity, patience and cross-cultural capabilities.

I think it is reasonable to believe that Jokowi, just like other world leaders, will make decisions that – first and foremost – benefit his citizens.

Such topics are a reminder of the importance of understanding bilateral issues from different perspectives. At a basic level, there are the perspectives of outsiders looking in, and there are the perspectives of insiders looking out. At times, when Australians have looked out to the world, they have worried about Japanese or Chinese economic domination; they have campaigned for foreign-investment caps. At times, when outsiders have looked in to Australia, they have baulked at the foreign-investment rules. It is little surprise, given the history of exploitation by foreigners in Indonesia, that many Indonesians fear losing out to the next generation of foreign raiders.

This point crops up repeatedly in “Risky Business”.

In the case study on the Martabe mine in North Sumatra it is noted that “…there was a sense among some local people that others were getting rich off the resources right under their feet while they were missing out on a fair share”.

In his conclusion, the author writes that “One of the legacies of colonialism is that many ordinary Indonesians are deeply cynical about foreign intentions towards their country . . . many Indonesians are instinctively suspicious of foreign companies.”

This anxiety about fairness and equity runs deep in Indonesia.

Jakarta elites often talk about the need for ongoing poverty alleviation, mainly in the east.

After Ramadan – and indeed throughout the year – Indonesian Muslims can be extremely generous to those less fortunate. No one in Indonesia escapes the burden of poverty. This needs to be understood when thinking about business.

“Risky Business” reminds us that Indonesia is . . .

These facts make Indonesia a fast-paced, exciting place – a land of opportunity.

What is less apparent is that there are many Indonesias in Indonesia. The archipelago ranges from the daily Hindu rituals practised in Bali to the prevalence of Islamic sharia law in Aceh and the semi-nomadic hunter-gatherer lifestyles of the Mentawai people. It is a nation with hundreds of languages. More than 200 million people speak the national language, Bahasa Indonesia, but other languages, like Javanese, Sudanese, Madurese, Bugis, Banjarese, Batak and Betawi, are still powerful.

It follows that getting to know the locals is critical to business success. What is their religion? What are the most important customs and rituals? How well do they engage with outsiders?

For businesses that operate across the archipelago, cross-cultural capabilities can make or bust a business strategy. In part, “Risky Business” shows the pitfalls of misinterpreting or underplaying the needs of local communities.

But Ari Sharp’s much bigger theme is that local communities in Java, Sumatra, Kalimantan, Sulawesi and beyond – while supported by decentralisation strategies – actually suffer because central policies benefit local conglomerates and local governments.  Ari puts a strong case that the way power is distributed in Indonesia results in the rich getting richer to the detriment of those most in need.

In one of his damning assessments, the author says “Some local conglomerates appear keen to reserve the spoils of Indonesia’s middle class for themselves.”

To his credit, after detailing what he summarises as the woes of foreign companies struck down by nationalism, suspected cronies, inept legislators or soul-destroying legal tussles, Ari puts forward suggestions for the incoming Jokowi Administration and for foreigners looking to invest. He also lists several reasons why things should improve.

“Risky Business” is both hard-hitting and forward-looking.

Paul Ramadge (@paularamadge) was the Founding Director of The Australia-Indonesia Centre and made the speech at the book launch in Melbourne on Monday 29th September. Ari Sharp’s new book “Risky Business” is now available in bookshops. You can also follow Ari on twitter (@arisharp)