Home » Knowledge Bank » Attitudes » In Memoriam: Founder of the Monash Centre of Sou… 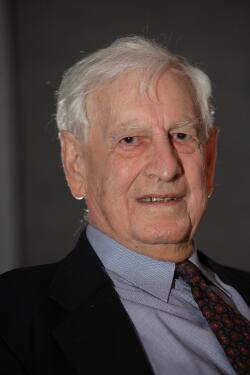 A founding father of Southeast Asian studies in Australia, Professor John David Legge, passed away today at the age of 94.

On 24 November 2015, staff and students in the Faculty of Arts at Monash University came together to celebrate the official opening of the John Legge Study Space in the Menzies Building at the Clayton campus. Such a tribute was entirely fitting given the many decades years John had spent in that very building teaching and mentoring students and academic staff. With Herb Feith and Jamie Mackie, in the 1960s John Legge formed part of a formidable team responsible for establishing Monash University as a world leading centre for the study of Southeast Asia and Indonesia in particular.

John first attended Warrnambool State School and then Geelong College, graduating as School Dux in 1939. After enlisting for war service on 20 October, 1944, John first worked with the Directorate of Research LHQ but then embarked for New Guinea on 29 October, 1944 with the ‘policy advice bureau’ HQ AMF School of Civil Affairs on detachment to Australian New Guinea Administrative Unit. He was subsequently promoted to lieutenant on 8 March, 1945 and discharged on 13 December that year. John is a graduate (BA) of Melbourne University and an Oxford PhD. He was a Reader at Melbourne University in 1959 and published the monograph, Britain in Fiji, 1858-1880, (1958).

John was appointed the foundation Chair of History at Monash University in 1960 and served in that position until 1977. From 1978 to 1986 he was Dean of the Faculty of Arts. In 1964 he founded the Monash Centre of Southeast Asian Studies, serving as its chair until 1977. ln 1969-70 he was Director of the Singapore Institute of Southeast Asian Studies. In 1987-93 he was an Executive Member on the Victorian Curriculum and Assessment Board.

His main research and teaching interests were the history of modern Indonesian and historiography. Among his significant contributions to this field was a study of regionalism and local government in Indonesia (1962), a biography of Sukarno (1972, 1985, and 2003) and Intellectuals and Nationalism in Indonesia (1988). Concerned also with Australia’s view of its place in the world, John was a member of the Australian Institute of International Affairs since 1947, and wrote its history in Australian Outlook (1999).

John was elected to the Academy of the Social Sciences in Australia in 1964 and was recently appointed a Jubilee Fellow. His international reputation established Monash University, from its earliest years, as a centre of excellence for the study of, and research into, Southeast Asia and, more particularly, Indonesia.

In 1988 he was appointed Officer of the Order of Australia. The citation read: ‘For service to education, particularly in the field of Asian Studies and international relations’.

John Legge continued to serve Monash up until recent years, being called upon to give advice to successive Deans of Arts, recent Vice-Chancellors, contributing to the Board of the Herb Feith Foundation up until 2013, and participating in research seminars and the activities of the Centre of Southeast Asian Studies and the History Program.