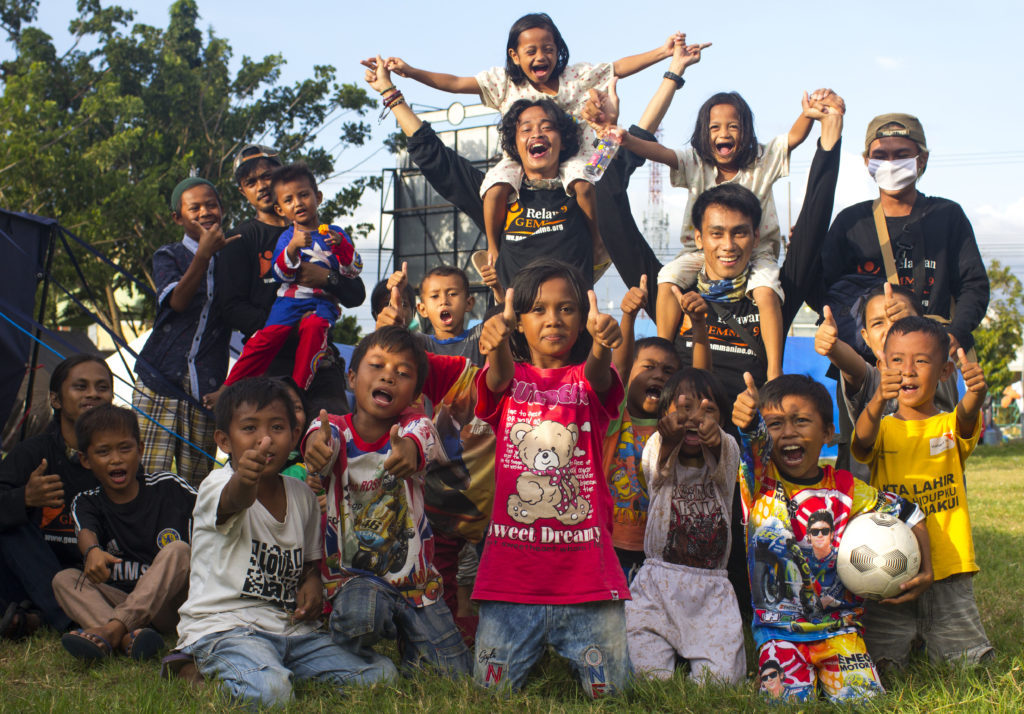 Watching journalists piece together the first snippets of information about the earthquake and tsunami in Sulawesi, we had an instinct that we should go.

Images of grieving families and villages reduced to wreckage were harrowingly familiar. We had recently finished a documentary exploring how the 2004 Indian Ocean tsunami transformed the worst affected region of Aceh, Indonesia.

We weren’t yet sure what our involvement in Central Sulawesi could be, but we wanted to show solidarity as Australians who had also witnessed communities in Aceh get back on their feet after the 2004 tsunami.

We had a sense that our best contribution might be to collaborate through storytelling.

Our first point of contact was our friend Dery Prananda, a filmmaker in Yogyakarta we’d met through ReelOzInd!, Like Dery, our films screened in the travelling short film festival in 2017.

Dery jumped on board along with his cousin Firman, an aspiring cinematographer in Makassar who was on his way to join an NGO in Palu.

The four of us met in Makassar and amidst convoys of brightly branded aid trucks we began the three day drive along the coast towards central Sulawesi.

The airport in Palu had just reopened but with self-sufficiency in mind, we decided to travel by road, stuffing our car with supplies.

Making our way north we enjoyed local hospitality from Dery’s and Firman’s families as we gathered information (and received tips on DIY earthquake detection devices to use when sleeping).

As the landscape grew increasingly lush, hints of disaster became apparent. Hours from Palu, we saw gatherings of displaced people and signs for open kitchens.

Water became scarce in the shops and on the outskirts of Donggala, kids scrambled along the roads, chasing cars in hope of donations.

In Palu and surrounds, makeshift camps had sprung up everywhere. Families camped on the front lawns of universities and mosques, in courtyards down back streets, in small neighborhood parks and in the foothills of mountains they had run to.

It was overwhelming. We didn’t know how we would be received or exactly how we could help. We had a little water and food to offer families exposed to the dense midday heat, but it was vastly inadequate.

We met a young mother who had given birth in the camp just days before and though she looked astonishingly well, two toddlers lay dazed and dehydrated beside her.

We were warmly greeted by an elderly man suffering prostate cancer carrying a catheter and plastic bag.

We were welcomed by excited children and women who waved us over as they divided sacks of coffee and rice, inviting us to photograph their activity. Exhausted yet friendly faces emerged from tents, gathering their families together for a portrait.

There seemed to be a desire for people to have their photo taken, their conditions documented and understood.

That night there was an earthquake that sent us all stumbling from our beds into the street. Friends in the camps told us they had run again to the mountains and one of the children had been separated from the group for some time.

The following night it rained heavily and the simple tents began to flood. Families gathered under a shelter where they had been sorting donated women’s clothes.

As the children grew restless in the rain a few men emerged in ridiculous combinations of dresses and scarves. Dancing with the kids, they brought incredible laughter and relief to the group.

In the morning many people returned to the ruins of their homes. They gathered scraps of wood to build flooring for their flooded tents.

With the wet season on the horizon, their resourcefulness was also a sign of their dwellings becoming more permanent, their futures unknown.

Their homes would eventually be rebuilt, but many were reluctant to return to their land which lay just meters from the beach.

We were amazed by the resilience we encountered daily. People had maintained their playfulness and their pride in the midst of disaster.

They showed incredible dignity inviting us to document their lives, and welcoming us into their tents which they cleaned and furnished as best they could though they had received so little.

We wanted to learn about this condition of displacement, which is becoming alarmingly familiar around the world. There were countless remarkable stories we could explore but we were drawn to the experiences of children in the camps.

We observed a trauma healing session for children run by a group of student volunteers. It was incredible to see the impact a few hours of simple play had on kids who had been bursting with restless energy or waiting listlessly in the heat.

We spent a week with these kids in their camp, documenting the rhythms of their life as groups of volunteers returned daily to play, teach and help them heal.

With our basic Bahasa Indonesia we connected with the kids through games, teaching each other variations from home and learning new phrases.

Our last afternoon evolved into a game of ‘Clean up the Camp’ which had the kids dashing between tents to collect the rubbish that was accumulating.

In this kind of environment it was especially important and rewarding to collaborate with our Indonesian friends Dery, Firman and Hasrullah.

As a team we could relate more intimately to the communities in the camps. Working with kids experiencing trauma called for extra sensitivity, and we brought on board Hasrullah from the trauma healing team to help the kids write their stories for our film.

Although parts of their stories are horrific and can be hard to listen to, it felt like a positive step for the children to give voice to their experiences and concerns.

Each of them has kept their written story as a record of their experiences, which they can share with future generations.

Melanie Filler and Tim Barretto are Sydney-based documentary filmmakers who just returned from the tsunami and earthquake devastated region of Central Sulawesi. “We had a sense that our best contribution might be to collaborate through storytelling,” they wrote. This is their story.