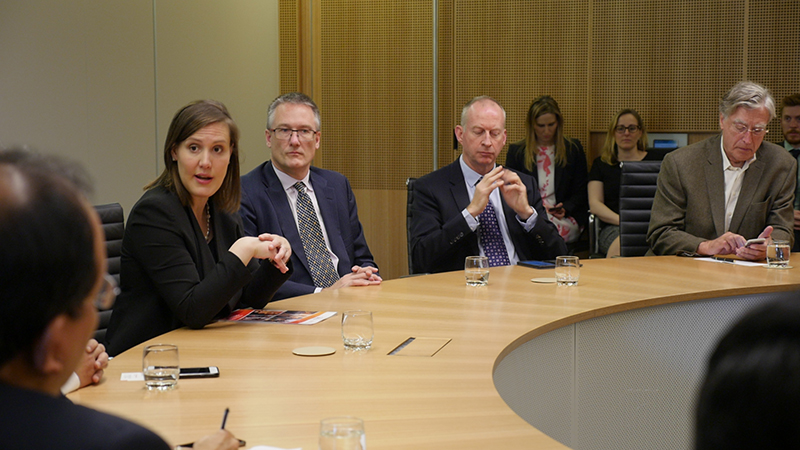 One of the most senior groups of Indonesian finance industry leaders to visit Australia has held talks this week with some of the nation’s most influential company executives and government officials.

A highlight for the 30 delegates was a meeting on Wednesday 26 October with the Federal Minister for Revenue and Financial Services, the Hon. Kelly O’Dwyer MP, in Sydney as part of the inaugural Australia-Indonesia Financial Leaders Program.

The group, including leading lights from the Indonesia Financial Services Authority (OJK) as well as representatives from Indonesia’s banking and insurance industries, took part in a roundtable discussion on financial policy with the Minister.

“Australians feel very very close to Indonesia, and financial services is an area where we can work incredibly closely together and learn from one another,” the Minister said.

The Minister expressed her support for the program and encouraged further exchange of knowledge through future bilateral initiatives.

Addressing the group and OJK Vice-Chairman Rahmat Waluyanto, the Minister said of the program, “It signals very strongly to us your engagement, we welcome it, and we look forward to many more exchanges just like this.”

The meeting follows a series of workshops and events which saw the group interact with representatives from a variety of prominent organisations in the financial sector. The delegates participated in workshops with partners from PwC and senior members of ASIC and APRA, discussing regulation, fintech, blockchain technology and other pressing issues in the sector.

QBE Group CEO John Neal and PwC partner Andrew Parker addressed the group on corporate social responsibility at a dinner hosted by QBE. NSW Parliamentary Secretary for Trade and Investment, the Hon. Jonathan O’Dea, spoke on developments in the state at a dinner hosted by Baker & McKenzie.

Following the opening three days in Sydney, the program shifts to Canberra for dialogues with Treasury and the Department of Foreign Affairs and Trade, before heading to Melbourne to engage in workshops with ANZ, Bank of Melbourne and Monash Business School.