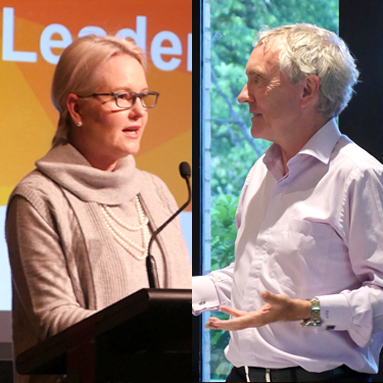 Director of Research, Adjunct Professor Richard Price, and Director of Engagement, Elly Patterson both depart the Centre on 21 July 2017. Both are foundation members of the Australia-Indonesia Centre, joining in March 2014.

During his time at the Centre, Richard has created and led the Centre’s research program, which has brought together over 300 researchers from universities and research centres in both nations, overseeing new heights in Australia-Indonesia research collaboration.

Highlights from Richard’s tenure include:

In addition, he has supported scores of bilateral workshops, engaged countless business and government stakeholders, and united institutions and individuals in the quest to use scientific research to meet our nations’ shared challenges.

After three years with The Australia-Indonesia Centre, Elly Patterson also moves on.

During her time with the Centre, Elly established significant influential networks in both nations, delivered major leadership initiatives and built active collaborations with dozens of organisations in both countries.

The flagship Australia-Indonesia Leaders Program has connected hundreds of emerging leaders in both nations, who are developing new strategic partnership activities through an active alumni network.

The program, developed in collaboration with Indonesia’s Ministry of Foreign Affairs, built partnerships with over 25 organisations and academic, business, government and diplomatic leaders in both nations. In 2015, China and the US replicated this contemporary leadership program model and in 2016 Indonesia’s Financial Services Authority commissioned the program to be delivered for financial leaders.

Elly has also worked closely with board members and key stakeholders to deliver a range of sectoral initiatives and major events in Australia and Indonesia.

We express our deep gratitude to Richard and Elly for their invaluable contributions to the Centre’s first phase and wish them the best of luck with their future endeavours.

Farewell messages for Elly and Richard can be sent to Operations Coordinator, Enza Russo, at enza.russo@monash.edu

The Australia-Indonesia Centre is pleased to welcome Dr Anisa Santoso as the Centre’s Research Coordinator.

Anisa served as Research Manager at Universitas Indonesia from 2013 to 2017, where she has also lectured in International Relations. She holds PhD and master’s degrees from the University of Nottingham in the UK and was a co-lead for the Urban Water Cluster. Her areas of expertise include urban surveys and mapping, and health and migration.