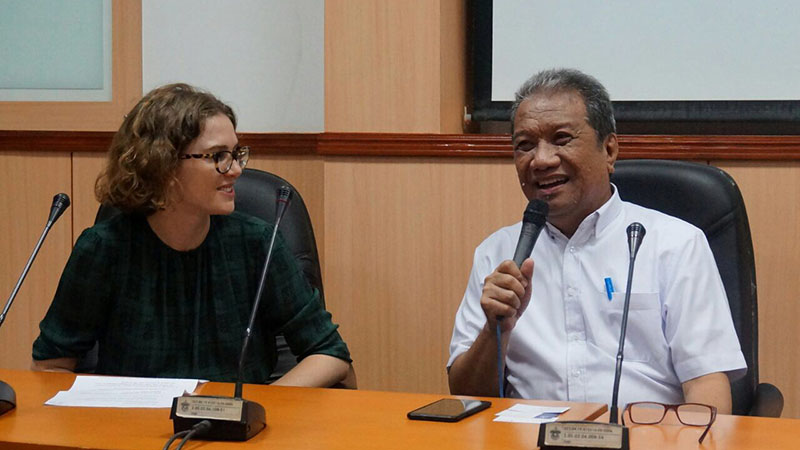 Australia has a long history of engagement in eastern Indonesia – a region closer to Darwin than Darwin is to Sydney. An important frontier for this cooperation today is academic partnerships, which I saw expanding during my time with the Australian Government in Makassar, and am continuing to support in my new role with the Australia-Indonesia Centre.

I arrived in Makassar in late 2016 to help establish the still-fairly-new Australian Consulate-General, tasked with fostering business and people-to-people links between Australia and Indonesia, with an emphasis on education. I thought my role would include generating more awareness among Australian universities about eastern Indonesia, but I found interest in creating new institutional relationships and seeking out research collaborations was already strong among Australian universities: on average one Aussie university representative visited Makassar each week.

Through this work, Australian universities are already making an impact – co-publishing alongside bright eastern Indonesian academics. Examples of fascinating research included discovery of a new species of rat in West Sulawesi and research that unearthed ancient human artefacts in Leang Leang, not far from my base in Makassar. However, I also began to realise the potential for Australian universities to go further – both as development partners and to kick-start business links between Australia and eastern Indonesia.

Australia’s development assistance to Indonesia includes important investments in academic exchange – including the Australia-Indonesia Centre and the Indonesia Project. Visiting academics are a very visible part of our engagement, with a stream of academics giving public lectures and workshops across the eastern provinces.  This visibility is essential, demonstrating to our neighbours our commitment to the success of these exchanges. Building on this, Australian universities have the potential to play a greater role as development partners in eastern Indonesia. A good example is Monash University-led RISE project, trialling water and sanitation solutions in selected slum districts in Makassar, with funding from the Welcome Trust and Asian Development Bank. Scaling research findings to aim for development outcomes at this level is something for other universities and institutions to aspire to.

Secondly, kick-starting business links. Doing business in eastern Indonesia isn’t about quick wins. Research collaboration is perhaps an ideal bedrock for fostering the business case and forming relationships. A good example is the University of the Sunshine Coast’s (USC) approach to business development across eastern Indonesia. Initially collaborating with the University of Cenderawasih (UNCEN) in Papua to deliver province-wide teacher and school management training, they have now developed a partnership model for leadership and professional training which has already reached over 2,000 participants.

USC’s Senior Advisor David Shirley is based in Makassar and emphasises the time it takes to develop the trust and the groundwork required to make this model work. As a result of their success to date, they are now looking to work with local governments elsewhere in eastern Indonesia as well, again in partnership with local regional universities. Mr Shirley asserts that the benefits of this progress extend beyond the research, joint academic programs or scholarships on offer, as universities are often seen as innovation drivers, and eastern Indonesia in particular is playing ‘catch up’ in developing local economies, education standards, and other key sectors. These partnerships are essential to redirect the focus to the most needed and underdeveloped regions.

These examples show the impact Australia and our universities are making in eastern Indonesia. However, there is potential to achieve more, for both business and development. The Australian Consulate-General in Makassar was established with this in mind. The Consulate-General plays a key role in helping Australian universities – and businesses and social enterprises – to find suitable partners. Fostering this emerging network of Australian and Indonesian universities is an important way to build upon the valuable work and progress to date.